The internet really does seem to give power to the people in a way which they've never really had before. Never mind the Arab Spring and all that, here in the UK Twitter and blogging has scored some notable conservation victories in the last month or so. First there was Buzzard-gate where Defra were planning to cull buzzards because of the tiny numbers of pheasant chicks that they might kill in a year. Thanks to a vociferous internet campaign from outraged internet-savvy conservationists this was dropped within a couple of days. In addition, today rumblings began (see e.g. here) about hunting trips organised by Davis & Bowring ("Chartered Surveyors & Land, Sporting & Estate Agents" according to their web-site) to go to Morocco specifically to hunt Turtle Doves. As if Turtle Doves don't already have enough on their plate! Hunting them is now illegal in the E.U. (not that that stops the Maltese hunters but that's another story) but I suppose is legal in Morocco. Anyway, as an outraged birder I fired off a stiff e-mail to the appropriate person. I also posted several Tweets on the subject, trying to whip up a storm about it. With Buzzard-gate it soon got quite a momentum on Twitter though the Turtle Doves didn't really seem to catch on in the same way despite my catchy #StopTurtleDoveHunts hash-tag. Anyway, imagine my surprise this afternoon when I got back the following e-mail from them:

Adam,
Thank you for your email. We have no plans to send any hunters to Morocco and have removed this from our web site.
Nick Mason
www.davisandbowringsporting.co.uk


True to their word the offending page had been removed from their web-site and in it's place was a satisfying 404 message ("Page not found" for the non-internet savvy). Result! Not that I can in any way claim much credit but it doesn't take many people collectively sending in e-mails like this or posting things on blogs for a company to decide that it's not worth their while carrying on with the offending behaviour.


One thing that struck me about all this is how easy it is to protest. Back in the old days you actually had to go somewhere and stand around in the freezing cold for ages with a placard to make your point. But now, with the click of a few buttons you can be suitably outraged from the comfort of your own home and what's more to let lots of other people know and hopefully get outraged themselves. For some reason I've got over 400 followers on Twitter (@PMBirding if you're interested) and it only takes a few of them to get on board for it to achieve critical mass. Power to the people I say!

Anyway, you may have noticed a distinct lack of bird posts of late on this blog. This of course has been due to the summer doldrums which from my point of view seem to be continuing well into August. I can't really complain, my patch at Port Meadow has been on song with good numbers and varieties of waders for quite a while now but in terms of there being something juicy to twitch there just hasn't been anything within my self-imposed distance limits that's tempted me.

Well today Keith Clack found a Great White Egret at Farmoor reservoir though he saw it for all of 30 seconds before it flew off in a north easterly direction. Now this was in the direction of Port Meadow so I went over mid morning to see if it had landed there. No such luck though there were two Ruff new in, as well as the usual waders. However, later this afternoon Roger Wyatt re-located the Egret at Cassington GP which was only 10 minutes drive from my house. Now I don't need Great White Egret for the county list and had it been much further I probably wouldn't have bothered but seeing as how it was so close it would have been rude of me not to pop in to pay my respects. So it was that a satisfyingly short time later I was pulling up by the appropriate pit in the Cassington complex.


The bird was on show the whole time though usually all you could see was its head and neck poking up through the vegetation on one of the main islands. Quite a few of the usual county birding suspects turned up and we all had a good natter in between ogling the Egret. Whilst I was there it did have a brief fly around and I took a few snaps with the super-zoom but all my photographic efforts turned out to be fairly crappy. Still here they are for the record. 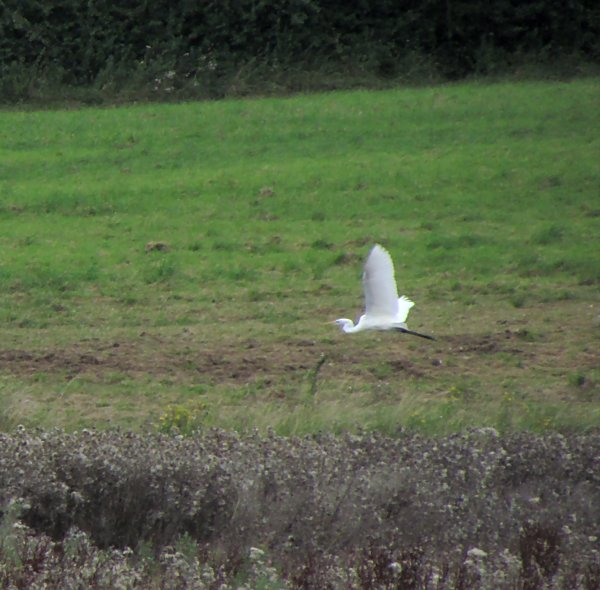 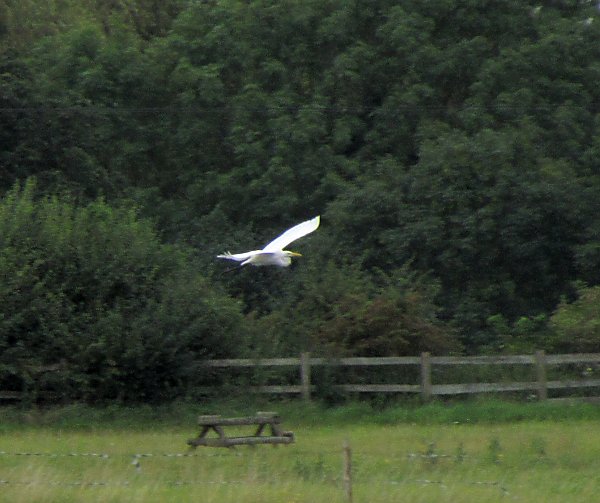 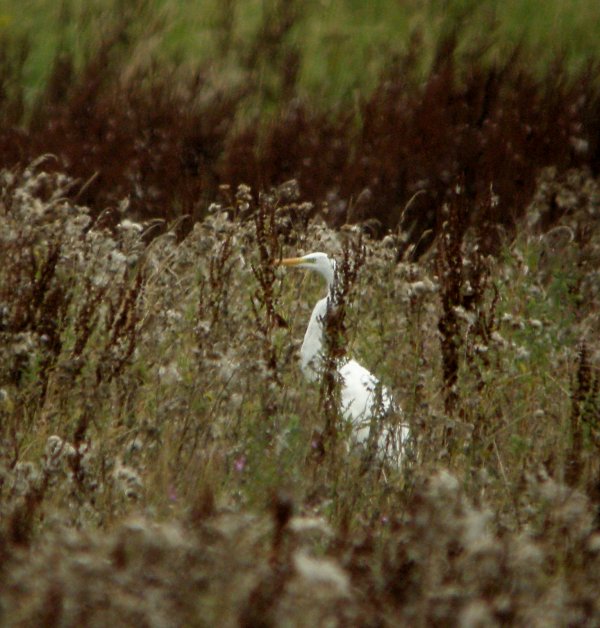 
It's amazing how quickly Great White Egret has gone from a county (and national) rarity to being a rather regular bird, even within my own short birding lifetime. Still it was very nice to see a decent bird in the county again after what seems like far too long - it's amazing how quickly a good spring can fade from memory! Let's hope this trend continues and we start seeing some of the other rarer herons and egrets regularly in the county as well.

Well done Gnome it used to be the power of the pen but it now appears the power of the keyboard is the new way to right the wrongs and give our wildlife a chance.
As you say the GWE has become more familar to us although it was only in 2007 I found the first Oxon one at Dix Pit. I've been out of blog action due to a heavy summer cold but as I start to feel better stronger ranting urges are surfacing and I will soon be back in ranting mode.
camboy