There must be some conservation law regarding the amenablity of birder's wives to the sudden disappearance of their spouses due to the Call of the Mega. I postulate this as a result of reading Ewan Urquhart's latest (and excellent as always) Black Audi Birding update during which he describes his wife's remarkable lack of concern as he "ducked out" of a trip to visit friends in London leaving him free to spend the day en cherchant le canard. The sum total of amenability must be conserved so the same story from my perspective couldn't have been more different...


I was just getting ready to go out for a quick morning run around the patch. We'd had the usual Sunday morning lie-in with a cup of tea whilst our six-year old chatted away to us. Later on we had my VLW's niece and her boyfriend coming over for Sunday lunch so there was just time for me to nip out to check the patch before having to help with peeling some potatoes. It was at that point that Farmoor stalwart Dai John (see his blog here) called to report a Falcated Duck at Farmoor. I posted the news on the Oxon Bird Log and then suggested to my VLW that perhaps I could have my run at Farmoor instead of Port Meadow. This suggestion was met with a very frosty response and I decided that perhaps an afternoon visit would be more diplomatic. After a heavy bout of peeling vegetables (to try to restore some brownie points) it was then that my VLW discovered that the oven wasn't working and that the chicken inside the oven was as uncooked now as when it had left the fridge. A bit of fiddling around determined that it was just the fan setting that wouldn't work (the fan element had clearly gone) and that it would still cook on the conventional oven setting. This did mean that the whole meal was delayed by an hour and wouldn't now be ready until 2 pm. With nearly two hours to go until then, I tentatively suggested that I could nip out in the mean time and would still be back in time. Apparently this wasn't a good idea either as our guests would be arriving in about an hour. I mooched around despondently. Badger helpfully texted me to tell me that the duck was still there and showing well. Our guests then called to say that they were running late. I mooched some more. The guests texted to say that they would be even later and in fact conveniently wouldn't now arrive until the chicken was actually going to be ready. I mentally decided that it would not be helpful to work out how many times I could have been to Farmoor and back that morning before our guests did actually finally turn up. In the end they arrived, the chicken was very tasty and enjoyed by all. I quickly did some washing up after the first course and said that I wasn't interested in any dessert thanks and if it was ok I'd be nipping out now to Farmoor before it got dark. With the relief of a successful roast now out of the way my VLW was in a much better mood and agreed to my suggestion.


I hadn't entirely wasted my time that morning: whilst waiting for our guests I'd done some research on the mythical Third Way into Farmoor. There is of course the usual car park entrance and walk along the causeway. For birds in the south west corner of F2 there was the Whitley Farm entrance but legend told of a way into the north west corner of the reservoir from Farmoor village itself. I consulted an ancient oracle (Streetmap) and discovered a footpath to the reservoir from Meadow Close in Farmoor. With there not being much daylight left I wanted to maximise the time that I had with the duck and as this entrance brought you out right at the north west corner of F1 where the duck was located, it was the obvious choice. After fighting my way through the Botley Road traffic I eventually found myself in Farmoor and navigated my way to Meadow Close. I located the footpath without too much difficulty and a short time later I was on the bank in the north west corner of F1 in the company of the Mr. Two Eyes himself (back for seconds), as well as Peter Law, Paul & Vicky Wren and a non-local birder. The Falcated Duck turned out to be a very smart drake bird that was hanging out with a flock of Mallard. I wonder whether it felt that the green-headed Mallards were close enough in appearance to be acceptable company. 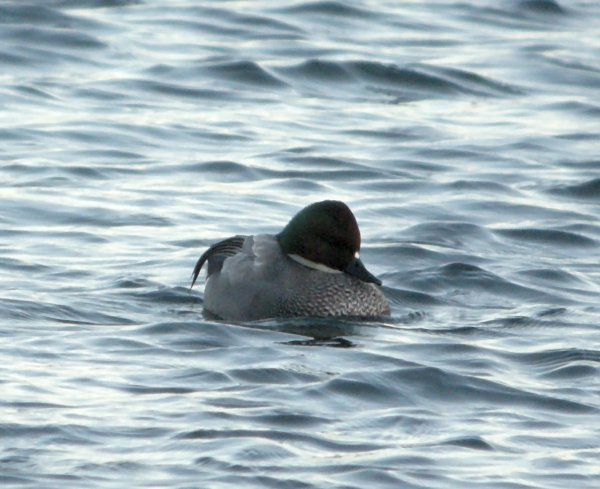 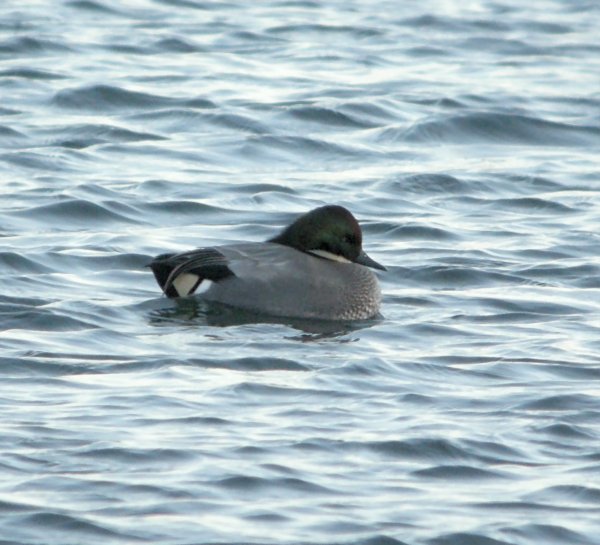 A couple of digiscoped shots of the smart Falcated Duck


As well as the star duck there was a Slavonian Grebe in the same corner and a little further around the three Scaup were still about. As it was getting rather dark now I didn't loiter much longer but headed back towards the Third Way footpath. As I approached the north west corner again I noticed that most of the ducks had now come out of the water to hang around on the bank, presumably to roost for the evening. The Falcated Duck was in amongst them but as I approached it shot off back to the safety of the reservoir, long before any of the Mallards had moved. It clearly was rather "wary" of my approach and others have subsequently reported similar behaviour. I soon found my way back to the car and headed off for home and a nice cup of tea. 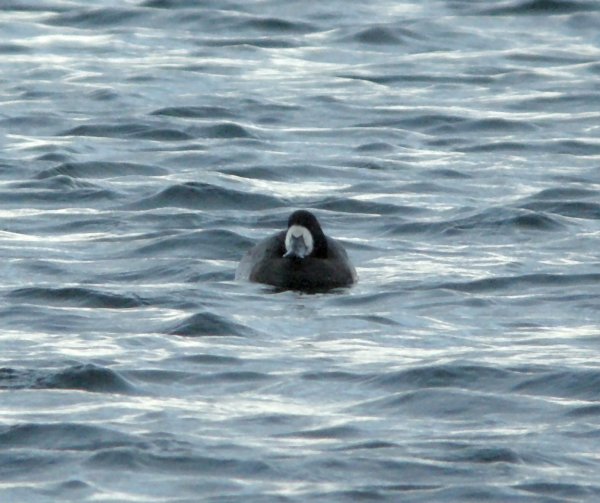 A bonus Scaup, one of three


There is of course the thorny question of the provenance of the bird. Ducks are always a bit of a minefield when it comes to ascertaining whether they are truly wild or just freshly escaped from a local collection. During the day Roger Wyatt had obtained some photos of it in flight thereby confirming that it was un-ringed and fully winged. We can add wary to this list but then there's the question of carrier species: apparently (according to BirdForum anyway) Wigeon and Teal are better carrier species than Mallard though there has been a large movement of ducks over the last week due to harsh winter conditions on the Continent. So to sum up:
You're never going to know for certain and my view is that if it ticks all the above boxes then that's about as good as it's going to get. Those who do competitive listing of course have to have some official arbiter of what they're allowed to tick though I personally list only for my own benefit and am unconcerned about official decrees on the provenance of birds. As Ewan points out, we all see it, send in our reports only for a panel of wise men to make a somewhat arbitrary second-hand decision about it which we then moan about. As he concludes, it's up to each of us to make up our own minds. So, am I "having" it? Well, quite frankly it would be rude not to.
Posted by Adam Hartley (Gnome) at 10:30