I don't generally drop everything and go for an out of county bird. I will do so for something within the county if I need it for my county list but for longer distance stuff I like to prepare, namely read up on site access, check that the bird is being seen regularly etc and generally plan things at least a day ahead. In fact that only times that I can recall going for anything on the spur of the moment are the Cream Coloured Courser (well worth it!) and the Drayton Greater Yellow-legged Greenshank (definitely not worth it!). However on Thursday I did another Code Red Scramble and in my defence I blame Badger and his insidious texts!


It all started innocently enough: I was chatting to Badger yesterday morning about some blog-related stuff and he happened to mention an American Buff-bellied Pipit which had turned up in Berkshire at Queen Mother's Reservoir. I hadn't checked the RBA web-site yet that morning so this was news to me though apparently the bird had only been seen first thing in the morning before going missing. Now most Oxon county birders will have this species safely under the belt thanks to the Farmoor bird in 2007. However, I'd only just started birding then and due to sheer ignorance of just how rare it was, hadn't bothered to go and see it then. This therefore would be a chance to see a species that is normally found in the furthest corners of the country as far away as possible from Oxon so I was definitely interested though as it was not currently on show it was no more than Code Amber at best. I switched on my RBA text alerts for just this bird and soon forgot about it. However at around 1pm a text came through that it had been refound. This was shortly followed by another saying that it was showing well and then one from Badger saying that the pipit was back. He then sent another pointing out what a relatively short drive it was from Oxford and at this point I started to weaken. I floated the idea with my VLW and there didn't seem to be anything family duties standing in the way until the evening. Suddenly it was Code Red: I got my gear together and at a little after 2pm I was edging the car out of the drive and heading off down the M40.


As I drove along admiring the frosty scenery and waiting for the car heating to kick in I started to think a bit more about what I was doing. Realistically I wasn't going to get there much before 3pm which would give me about an hour of daylight. I'd looked on the map and the reservoir was huge so unless the bird was actually being watched when I arrived there wouldn't be much time to even walk around it yet alone find the missing pipit. I just had to hope that it was showing constantly and not too far from the car park entrance. Oh well, there was no chance of me seeing it sat at home at my desk so I might as well give it a whirl.


A little before 3pm I arrived and managed to squeeze the Gnome-mobile in the last remaining space outside the sailing club car park. There I found a birder who was just leaving so quizzed him on the state of affairs. It turned out that the pipit was showing well and not too far to walk, in fact one could see the line of birders silhouetted on the skyline. I hurried inside and started yomping towards them. There turned out to be two lines of birders and the bird was clearly going to be located between them on the grassy path itself. In the company of another birder I power-walked onwards get ever closer. Suddenly when we were less than 50 yards away the two lines broke up and people started to walk away. This did not look good - to miss by that distance would really hurt! Fortunately it turned out that the bird had just flown down onto the reservoir shore and was now working its way along the shoreline again. It had a tendency to work its way in one direction consistently, either on the shore or on the grassy path. I wasted no time in setting up my scope and giving it a dammed good grilling.


Not having seen a Buff-bellied Pipit before I'd assumed that it would be fairly distinctive but in the poor light it wasn't so easy to tell apart from a Rock Pipit and I had to look carefully at it. It had a fairly uniform warmish mid-brown back with just very faint darker markings to it as opposed to the usually more grey-toned and darker colour of a typical Rock Pipit. The tertials and coverts had a very strikingly light brown border to them which stood out strongly. The bill was not the particularly strong bill of a Rock Pipit, and was yellow with a darker tip. There was a modest supercilium with no noticeable dark loral stripe and the face had rather an open "pleasing" appearance. The underparts had an off-white basal colour with smudged dark brown streaks and the diagnostic brown wash over the flanks and belly. The legs were dark coloured. 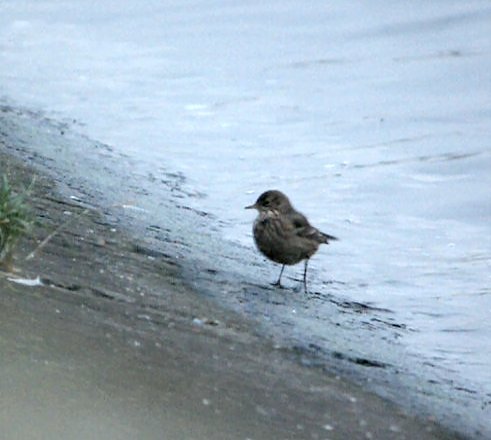 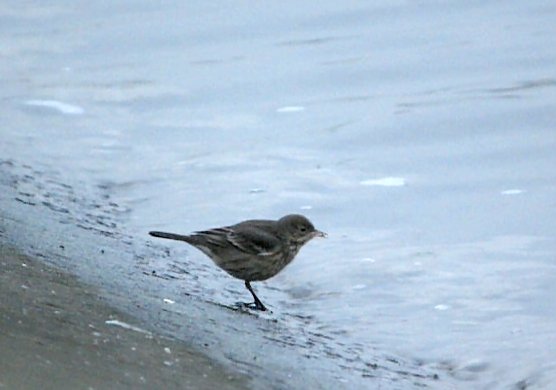 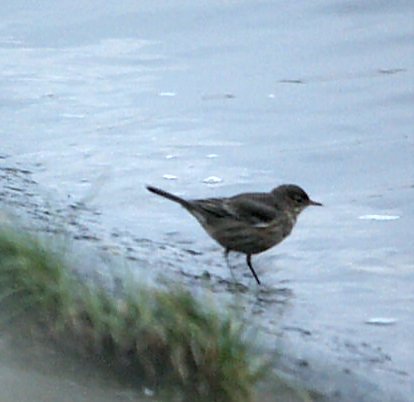 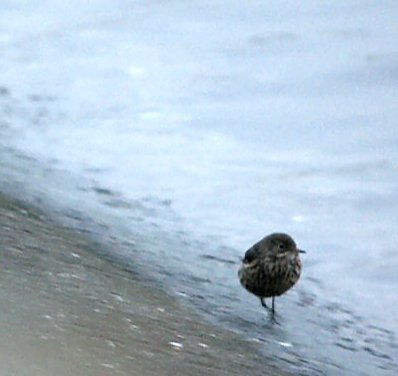 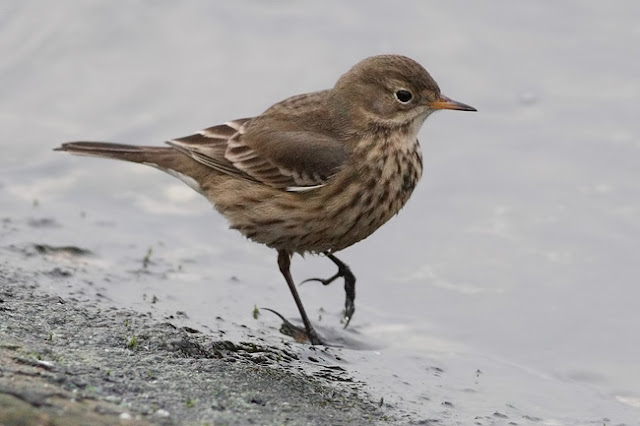 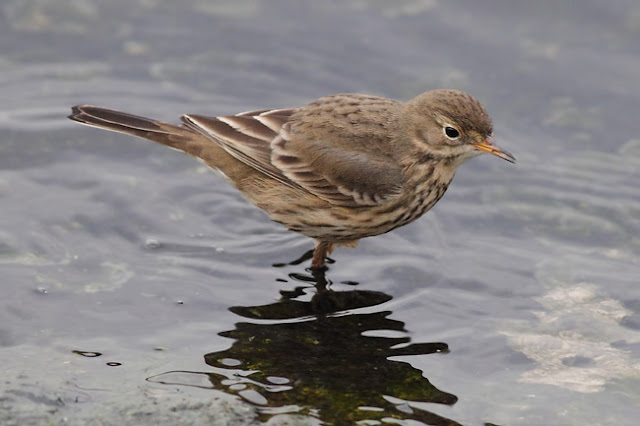 
The light was pretty poor but it was on show constantly and one was able to approach reasonably closely. I busied myself with trying to digiscope video it though the light and the constant movement meant that it was rather hard. Towards the corner it turned round and suddenly was coming back towards us. I abandoned my scope and managed to shoot some footage with my handheld Canon superzoom camera though the hand movement rather spoils it. At that point it flew off and relocated further down the path back towards the car park.

Some hand-held HD video using the Canon super-zoom. I got youTube
to stabalise it so it's not quite as shaky as the original.

It was nearly dark by this time and in the sub-zero conditions I was starting to feel very cold so I decided to head back to the car. I came across the bird again half way back though as the light had basically gone I decided not to linger. I headed back to the car and set the co-ordinates for home. Interestingly the iPhone Sat Nat app decided to take me back via the "short-cut" along the A4 and A355 rather than along the M25. This turned out to be a bit of a mistake and with the traffic it took a lot longer to get back though all the same I was easily back in time for my family duties. It had been an exciting Code Red Scramble and I once more basked in the warm internal glow of a successful outing.
Posted by Adam Hartley (Gnome) at 17:41