Berkshire seems to be having a real purple patch at the moment. Last month it was the Buff-bellied Pipit, and then unbelievably a second one joined the first one. This month they had a Yellow-browed Warbler at Moor Green Lakes NR - not quite in the same league as a BPP but at this time of year for an inland site, it was nevertheless impressive. Add to this a supporting cast of various Divers, a Long-tailed Duck and a Red-necked Grebe all at at Queen Mother's Reservoir and it makes for a good period. All good stuff but apart from the Pipit which I'd already seen, not enough to tempt me out of God's Own County. However, on Sunday the Warbler was "upgraded" (i.e. re-identified from photos) from a Yellow-browed to a Pallas's Warbler (it seems that people don't bother with the full "Leaf" or "Yellow-browed" bit in the name any more) which is yet another amazing find for an inland county. Anyway, this was enough to tempt me off my rather Christmas-be-larded derrière to go and take a look. Judging from past RBA reports, it seemed that the morning was best but with yesterday's forecast for snow and rain all morning I decided to wait a day until today to have a go for it. Thus is was that this morning at around 8 a.m. I was scraping ice off the Gnome-mobile and setting the Sat Nav co-ordinates for Moor Green Lakes NR, before plunging into the torrent of rush-hour traffic south along the A34. I arrived some time after 9 a.m. after an uneventful journey to find several other cars in the rather small car park. The people in the car next to me were just getting ready as well and one of enquired whether I was after anything special, which rather puzzled me as I would have thought that it was rather obvious. Anyway, it turned out that they'd not heard about the Pallas's Warbler and were just there to take a look around though they didn't seem that interested in looking for it and were more keen on the Mistle Thrush in the adjacent paddock - each to their own. Some ten minutes later I was at the Blackwater River where I met up with a few other birders and we all headed west along the river to the conveyor belt bridge as apparently in recent days it had been seen to the west of this landmark. It was a rather cold and cloudy start with and fairly birdless. After a while we came across a Long-tailed Tit flock and watched with keen interest - apparently the bird was always associating with a flock such as this though it wasn't in this one. At that point I got an RBA text reporting the bird as still present at the western most end of the stretch. I hurried off in this direction where I soon met up with Mike McKee (who found the the Buff-bellied Pipits at QMR) and it turned out that it was he who'd reported the bird again that morning. He was hurrying the other way after the flock with the target bird in and so I tagged along with him. We soon caught up with the flock and I had my first fleeting glimpse of the star attraction. Fortunately after that it wasn't too hard to keep track of where it was and we followed the bird all the way back to the conveyor belt bridge before the flock turned around and went back the other way along the river. Periodically one would get a view of it and sometimes it even came down and worked its way along the bank on the ground, thereby giving some excellent if brief views. Mike was trying to get a photo and he did indeed manage a few record shots with his DSLR but with my slower super-zoom I didn't even bother trying but instead just enjoyed watching the bird.


It wasn't hard to see why it had been mis-identified as a Yellow-browed for so long: the crown stripe was rather subdued and during the whole time I was there I never saw the pale yellow rump. Given how hard it was to photograph it wasn't until some ten days after it was first discovered that someone got a photo good enough to ID it for what it really was. However, even without the crown stripe or rump, the supercilium was striking with the more intense yellow colour between the eye and the bill as well as extending all the way onto the nape along with the strong black eye strike. With the benefit of the correct ID it wasn't too hard to pick out the salient features in the field. 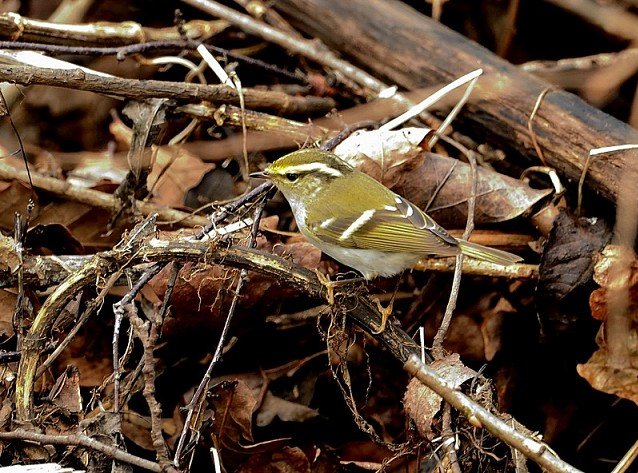 What a stunner! This is by far the best photo that I've seen of this bird
anywhere on the internet and is a real achievement given how hard it was to take
any kind of shot of it. Not taken by me of course but by Dave Perrett (c) 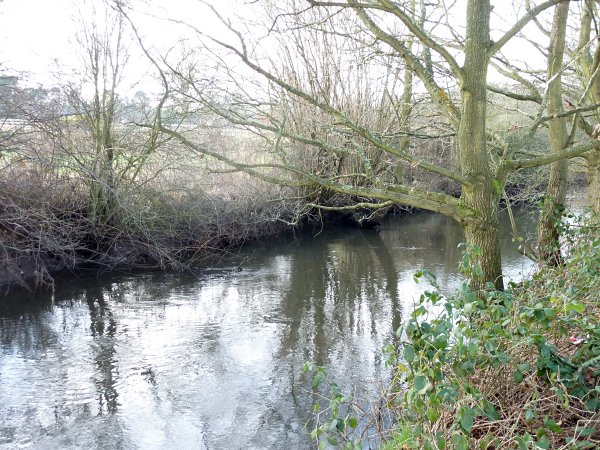 The River Blackwater - the bird spends most of it's time along
the far side which is Hants, the near side being Berks. 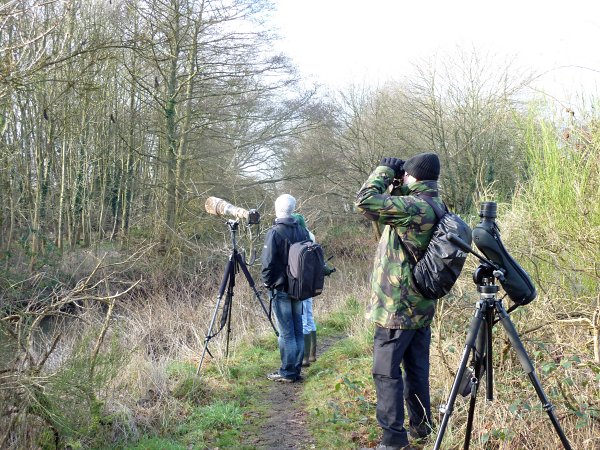 Mike McKee and Chris Heard looking for it in the copse 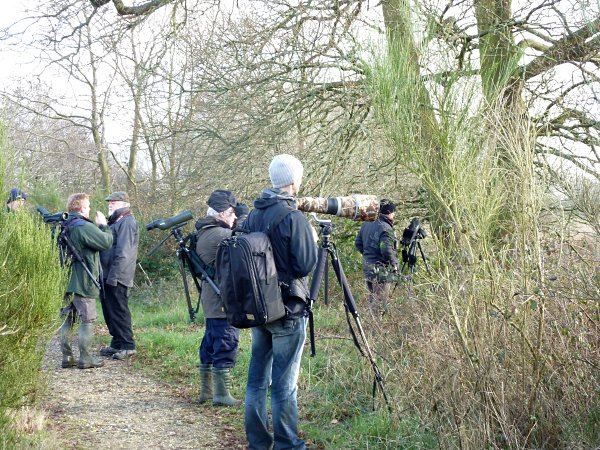 After a couple of hours it had worked its way all the way back to the west end of the river by the road where it was first found. By this time I'd had my fill of this gorgeous little bird and decided to wend my way back home, please to have spent some time with this cracking little sprite.