Given how slow things have been this spring I have been keen to pounce on anything good that turns up that fulfils my twitching criteria. A very showy Savi's Warbler at Lakenheath RSPB in Suffolk certainly ticked all the boxes: it was well established,  giving morning and evening performances each day for about a week now and it was only just over two hours away (who's going to quibble over fifteen minutes?). What's more, Savi's are normally very hard to see but this bird was apparently very showy and predictable. What more could you ask for? I mentally pencilled in a Monday afternoon trip in order to catch the evening performance though I had to wait for confirmation until the morning itself as my VLW had been a bit poorly and she didn't want to be left holding the fort if she was still under the weather. In addition, over the weekend the first Wood White butterflies had finally been seen (only four weeks late) at Wicken Wood which turned out to be very much en route so I could nip in there briefly on the way there. The Wickster had previously expressed an interest in seeing the Wood Whites and I was sure that he wouldn't say no to a nice juicy Savi's so even though it was very short notice I dropped him a speculative text. He hastily arranged his affairs and texted back in the affirmative and so it was that I picked him up from central Oxford at 2pm and we sallied forth.


En route we hit a log jam of lorries on the slip road off the M40 onto the A43 and started to wonder whether to ditch the butterfly detour but fortunately after about ten minutes it cleared itself and we soon made up the time. Wicken Wood (a new site for me) turned out to be in the deep backwaters on the Bucks/Northants border though we found it easily enough. It consists of a single central track going through a wood of rather small but densely packed trees. After about ten minutes of walking we came across a sun-lit patch where four of these dainty little butterflies were flitting around happily - easily identifiable by their size and jizz. I took a couple of quick snaps and we watched them for a few minutes though given that we were on a tight schedule we didn't linger long before heading back to the car. 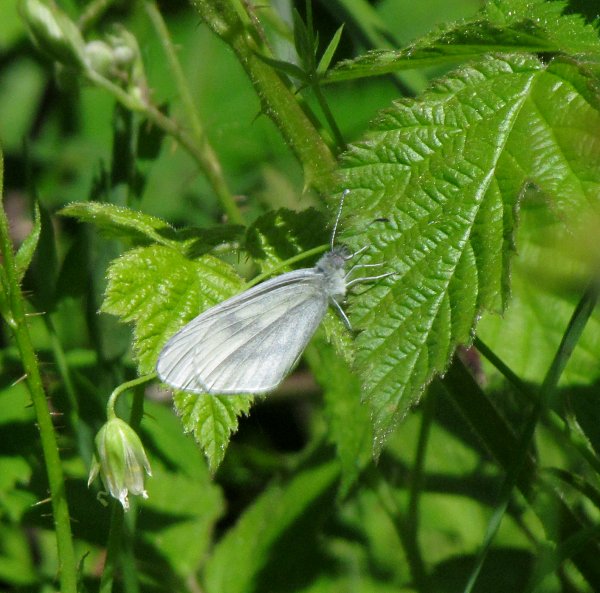 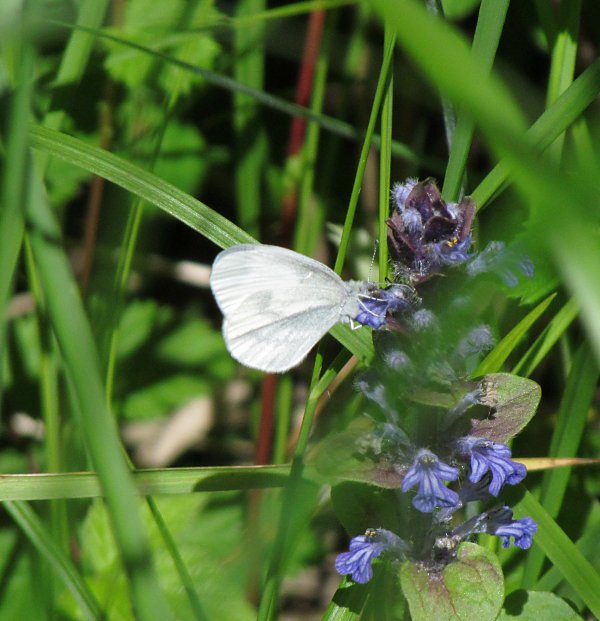 
We had a bit of problem navigating back to our main route as the Sat Nav took us down what turned out to be the private drive of a large country estate. It would have worked out fine except that the exit gate was locked and we had to retrace our steps. There was then a bit of a battle of wills when the Sat Nav decided that the best route was through Milton Keynes but eventually we got back on track and she acquiesced to our preference. The rest of the journey was uneventful and we arrived at Lakenheath at about 5:45 pm.


I'd only ever been to the reserve once before but I remember it being a wonderful place to visit. Lots of little reed-fringed pools and a couple of larger fens surrounded by three Black Poplar plantations and a river all made for a great selection of habitat. As we yomped towards the Savi's site there were Warblers chattering away everywhere and a couple of male Cuckoo's calling constantly. Marsh Harriers quartered the reeds and Swifts filled the skies with their aerial dog fights. Dotted about the place were helpful signs pointing out what to look out for. One mentioned Hairy Dragonflies and sure enough there was one close by. Another pool held a colony of sign-posted Marsh Violets. 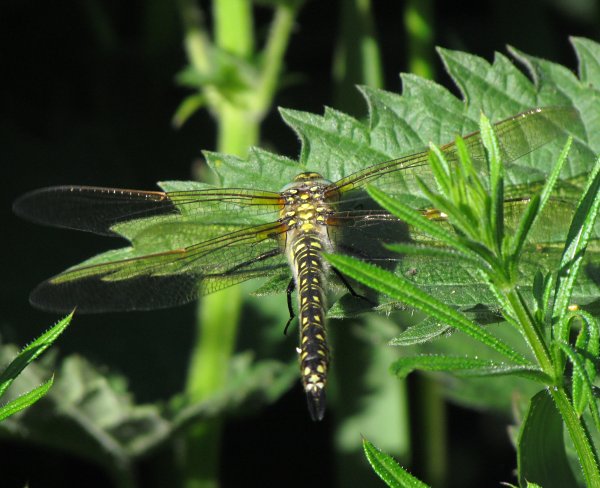 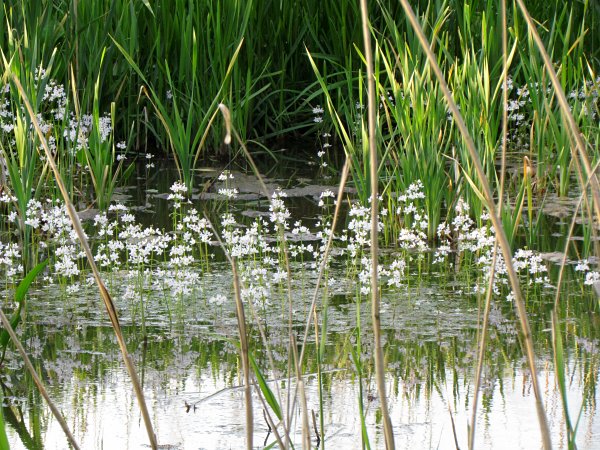 
After the best part of half an hour we came to the spot with a small gathering of ten or so birders patiently staking out a reed bed. There'd apparently been no sign of the bird so far but as it was only about 6:20pm there was no immediately cause for concern - yesterday it hadn't started the performance until after seven. We surveyed the scene, I munched my packed dinner and Tom looked out for the Red-footed Falcon though apparently it had moved right the west end of the reserve now. Reed and Sedge Warblers were babbling away everywhere and Reed Buntings were flitting in and out of the reeds constantly. Periodically a Marsh Harrier would go over and four fighter jets from the nearby airbase flew low overhead, briefly disturbing the tranquility. However, apart from a brief two second burst of reeling that could possibly be a copy-cat Sedgie there was no sign of the star performer. 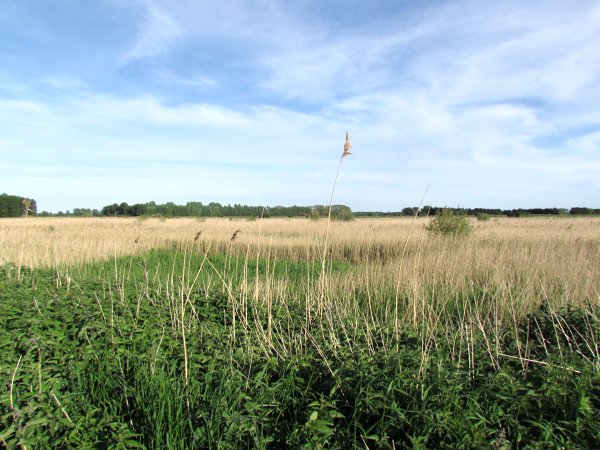 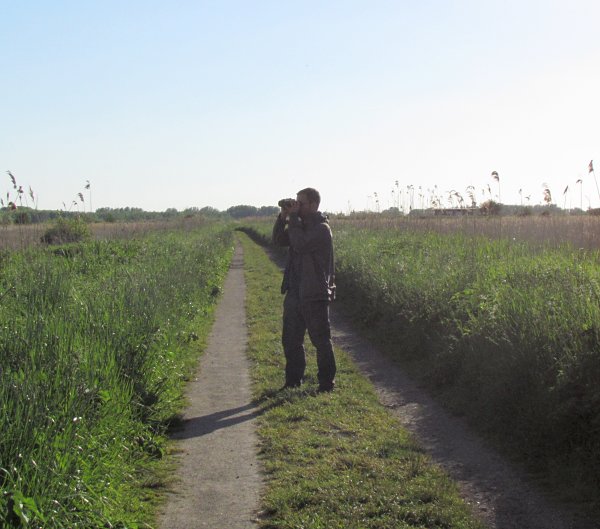 A back-lit Wickster looking for Warblers


Seven o'clock came and went and some people started to leave. Those of us who remained jokingly agreed to try tape-luring if there was no sign by 8pm. Suddenly at 7:25pm the reeling began close by and the bird came into view for me but low down in the reeds. Fortunately there was a line of sight just where I was standing through a gap in the reeds so I could clearly see the bird. I excitedly called it out and tried to get people on it but the viewing angle was quite small and no one else managed to see it before it moved out of view. It was therefore with mixed emotions (pleasure at having seen the bird myself counter-balanced with concern that Tom hadn't) that we all went back to viewing the reedbed. Fortunately some fifteen minutes later the reeling started again and this time it was plainly in view at the top of some reeds about thirty metres away. What's more it stayed there for getting on for ten minutes, reeling away with pauses in between. It looked like a rather dark and slightly scruffy Reed Warbler though you could clearly see the darker undertail coverts and the reeling was noticeably different from a Gropper, being faster and higher-pitched. An interesting Savi's fact is that apparently it's actually a Locustella rather than a Acrocephalus, which I hadn't realised until I looked it up though of course the similarity of it's song to Gropper should be a big clue. I'm getting to the stage now where I struggle to hear Groppers though I had no problems with the Savi's at all. Anyway, everyone managed to get on it and fill their boots with great views and I busied myself with taking some video. There was the usual problem of the autofocus fixing on reeds rather than the bird itself but in the end it came out ok. After a while, Tom and I agreed that we'd had our fill and given the long journey back and the fact that he had to catch a bus back in Oxford we yomped back to the car, a distant booming Bittern serenading us as we walked.

We left at around 8:30pm and were intending to go back via the same A14, A45, A43 route though signs reporting a good chunk of the A14 having been closed soon changed our mind and we opted for the brute-force route along the M11, M25 and M40. Light traffic conditions meant that I was able to give the Gnome-mobile its head and we raced back in two and a quarter hours, well in time for the Wickster's bus. It had been a long and tiring afternoon's travel but well worth it: it's not every day that one gets to see so well such a rare and elusive bird as a Savi's Warbler.
Posted by Adam Hartley (Gnome) at 13:58