When news broke on Monday afternoon about a Red-flanked Bluetail in Gloucestershire it certainly piqued my interest. For starters it was a winter record, quite possibly the first one for the country - certainly the only one in January since 2001 that I could find on past RBA records. What's more it was an inland record - whilst this bird is becoming increasingly common (now basically annual) in the country, they are almost always on coastal locations and therefore usually too far for me to consider twitching them. This bird on the other hand had been discovered in a secluded valley on the border between South Gloucestershire and Wiltshire. Given the remoteness of the spot one can't help but wonder just how long it had been there - it was quite likely to be an autumn vagrant which had somehow managed to survive all this time. Anyway, it had been first reported late afternoon on Monday and the chances were probably good that it was going to be there the next day. What's more it was only just over an hour away so I planned to head off for it on Tuesday morning on confirmation of it's continued presence.


Tuesday morning my phone duly made the encouraging beep of RBA news - still present! I'd done my research the night before and so knew exactly where to go, where to park and where to walk to. A quick grab of some breakfast and I got together my gear and off I set. Of course getting out of Oxford before 9 am was as troublesome as always but eventually I was on the familiar A420 heading west. The journey was uneventful and motorway traffic on the M4 was light and so it was that a little after 10am I arrived on one of the single track roads that populate this quiet backwater. The pager had suggested parking on a nearby minor road with some parkable verges but I could see up ahead a fuel tanker had got stuck trying to get past the plethora of parked cars there so that way was was clearly going to be blocked for a while. Instead I ducked off the road into a clear area by the entrance to a field where I saw another car parked. Just as I turned off the engine a chap came riding over on his horse. He turned out to own all the land around here and was curious to know what was going on. I filled him in on the details and asked if it would be OK for me to park there which he was happy for me to do. He duly rode off and I got my gear together and yomped down the road to the start of the footpath that follows the Broadmead Brook through a valley past Lower Shirehill Farm. En route I met up with Liam Langley and a chum, returning from paying homage to the bird - apparently it was showing well. A gentle walk of less than 10 minutes got me to the line of birders, standing by the gently meandering stream next to a picturesque farmhouse and looking up at the gently sloping and sun-bathed side of the valley. It was altogether a very pleasant spot. There were about 50 birders in total there, all watching the bird and I soon got my first sighting of it myself.

It was smaller than I'd been expecting, being basically of similar size and build to a Black Redstart. It was a first-winter type (probably a male due to the hint of blue on the shoulder) with fairly uniform grey/brown upper parts, paler underparts, a strikingly blue tail which it flicked downwards at regular intervals and of course the orangey flanks. On its head it had a striking white eye ring, a uniform dark bill and quite a pale throat area. 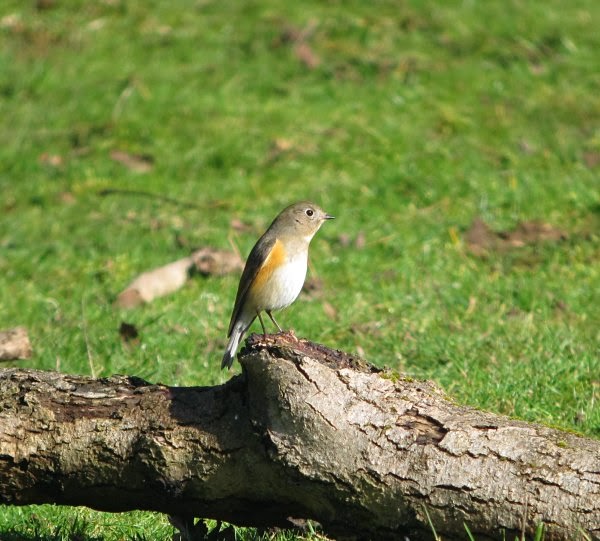 It was basically staying faithful to a relatively small area which included a brambled covered wall and a large single hawthorn. It would work its way around this area, hopping onto the ground to pick up insects and then back up onto a perch, constantly on the move. Whilst some people would try to follow it around, many were content to stake out one spot and wait for it to come to them. I took a few snaps with the Superzoom but it was basically a bit too far away for good shots so I resorted to trying to digiscope it. Because of its constant movement in the end I decided to stake out one of its favourite perches: a fallen tree on the grass by a bramble patch and wait for it to appear. Time passed and I got tempted to move to the other side of the wall to watch it, leaving my scope and digiscoping gear focused on the branch. Suddenly I realised that it had come back to the perch and I rushed back to where I should have stayed. Had I missed it? Fortunately, it chose to have a brief rest for a minute and I was able to rattle off some shots before it resumed its merry-go-round in its search for food. 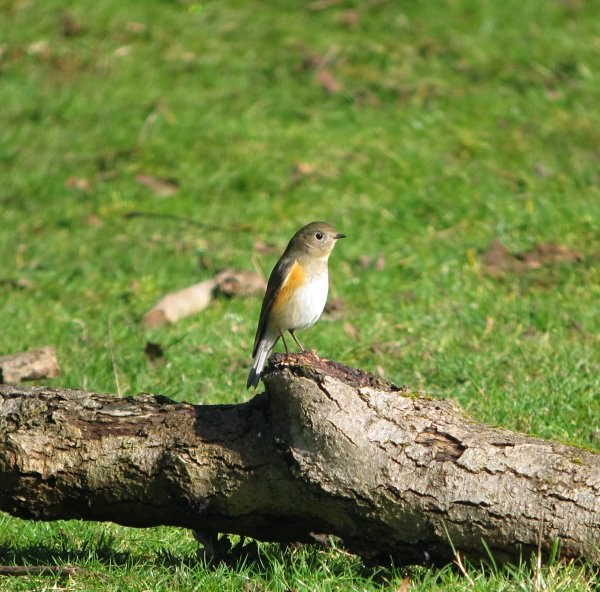 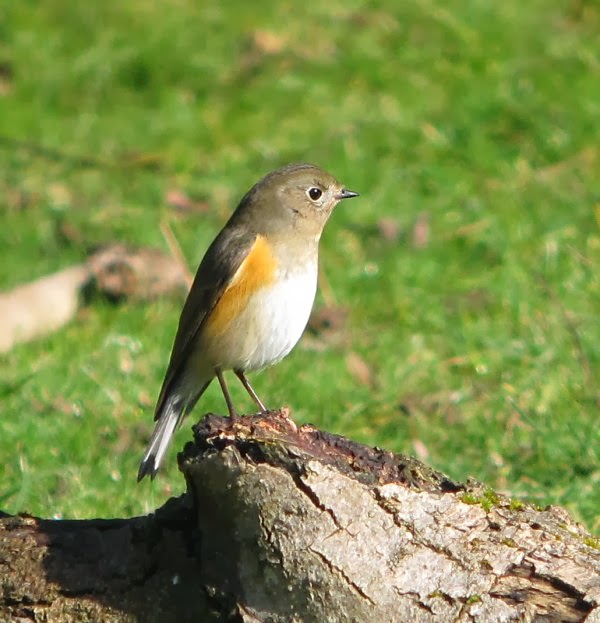 
More and more people were arriving including Lee Evans and James Lees (from Slimbridge WWT) and after a while it moved further up the hill where it had not been before during my time there. I went up to take a look and then realised that it was working its way back down again and headed back to my original spot. Yet more people arrived including one of the Big Lens Brigade who plonked himself down really close to the favoured dead tree, far closer than anyone else was standing. What a tosser! At this point, given the increasing crowds, I decided that it was going to get difficult to improve on my views and decided to settle for what I'd had. I strolled back to the car and had an uneventful drive back home, where I arrived just in time for lunch with my VLW. 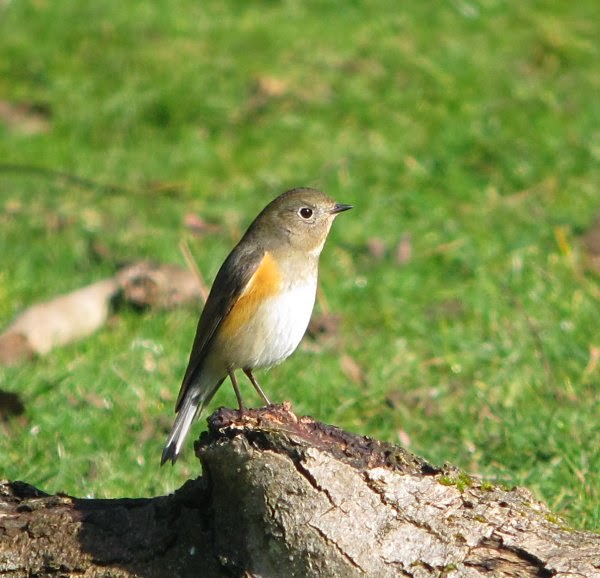 Whilst it wouldn't have scored highly on the Wickster Element of Difficulty Twitch Scale (see here for an explanation), it had been a nice straight-forward first out-of-county outing for 2014 for a lovely little bird in a beautiful location.
Posted by Adam Hartley (Gnome) at 07:46