Each year in April migrating Ring Ouzels use the contoured hillside of Aston Rowant and Linkey Down reserves as stopping off points on their migration northwards. Nestling in the Chilterns, these great examples of chalk hill habitat are somewhat spoilt by the M40 which cuts right through the centre of the reserve, dividing it in two. Nevertheless, it's always an interesting place to visit and with some time on my hands and wanting to unwind after a rather stressful few days at work I decided to go and pay a visit. Five Ring Ouzels had been reported that morning already so I knew that I was in with a good chance as I set off early afternoon. Earlier in the year I had actually tried to see the over-wintering bird over the border in Berkshire at Bury Down but hadn't seen it so whilst a "revenge" visit was too strong a word for it, it would nevertheless be nice to catch up with this species having missed it previously.

The weather was rather showery and as I walked down the steep slope on the north west side of the valley I realised that it was actually bloody freezing with a strong wind blowing up the valley. What's more I'd forgotten my gloves so I had to improvise with a pair of spare walking socks on my hands as mittens. I hid in a small copse of stunted trees by the path to act as a wind break and after scanning the slopes for a couple of minutes I soon spotted the distinctive crescent shaped breast patches of three males. They were on the far side of the valley and so quite a way from me. Whilst I could enter the valley if I really wanted to I didn't want to disturb the birds and I was content enough watching from afar. I tried to take some photos and video but the distance and the wind weren't making things easy. After a while I realised that actually there were four males present and as the wind abated and sun came out and warmed things up I savoured the enjoyment of watching such splendid birds and getting a glimpse into their mountainous world as they rested on their epic journey northwards. 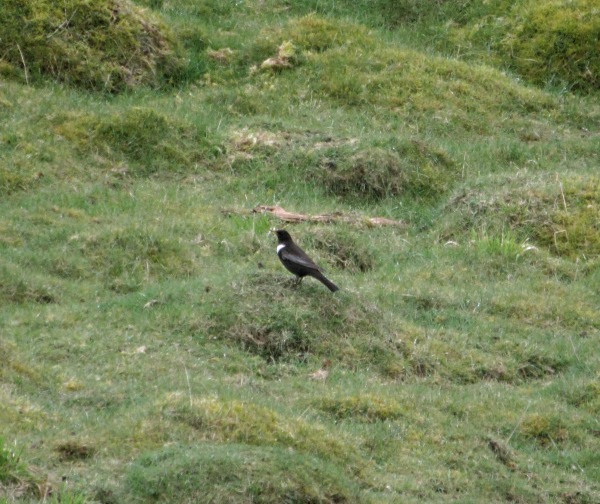