Regular readers may have noticed a distinct lack of posting on my front of late. This hasn't been how I intended it to be but a combination of work commitments and my VLW being unwell has meant that I've not been free to head out on my usual birding sorties as I would have hoped during the normally-productive month of May. Having said that, there haven't been that many opportunities that have fitted my trip criteria: nothing has been reasonably close that has looked fairly settled and twitchable apart from the Caspian Stonechat at Titchfield and the Kentish Plover up at Manchester, both of wish I regret not going for but sadly I just wasn't able to get away.


So now here we are in June already and the on-set of the summer birding doldrums. Actually for me this is a rather busy time of the year as I pursue my summer interests of butterflies, moths, odonata and also these days flowers. In fact I seem to be taking the latter more seriously this season and have been trying to get my head around some of the more tricky local common species. Anyway, with my increased interest I've been reading up on what's of interest within the county and have of course come across all the goodies that are on offer at the Hartslock BBOWT reserve, chief of which are the rare Monkey Orchids that are only found there and in a couple of places in Kent. Therefore, as it was the prime time to go and see them I proposed a family outing there this last weekend and so this is what we did. With no parking at the reserve at all we parked in Goring and walked along the river (stopping to check for Club-tailed Dargonflies at the railway bridge but no luck during the brief time we were there) before heading inland and up to the reserve.


For those who've not been before it's a relatively small steep chalk escarpment overlooking the Thames valley. The views are great and there's lots of wonderful specialist flowers to keep a newbie botanist such as myself interested for hours. Not that I had hours as the rest of the family quickly grew rather restless but I had enough time to rummage around the plants and to take plenty of photos before we headed back to the car. We were very lucky with the weather and for once it was sunny, warm and not too windy. It's a great little reserve and one which I can thoroughly recommend. 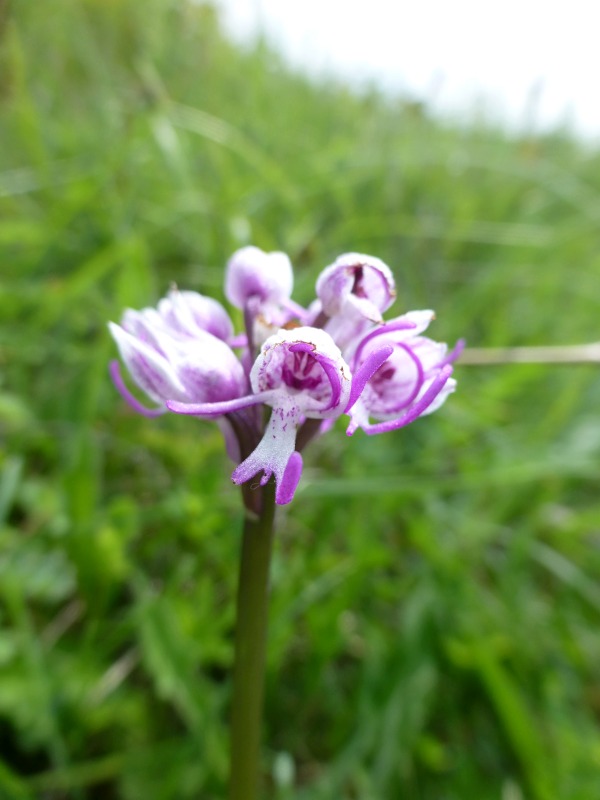