Regular readers may well remember how back in April I dipped horribly when trying for the Newport Broad-billed Sandpiper. I ended up going for this bird on the Sunday morning "via" Durham the previous day though sadly, despite it being there at dusk the previous day there had been no sign of it at all that next morning. The whole Durham Debacle still lingers on as a rather stressful and unpleasant experience (of which the dippage played just a part) so when news broke of the bird being back (surely it was too much of a coincidence for this to be a second Broad-billed Sandpiper) naturally my thoughts turned to a revenge outing. As an aside, it's possible that this one bird has been knocking around the country all this time: after Gwent one was seen in Lincolnshire at Frampton in May, before being seen at the end of May in Northumberland, popping in at Warwickshire at the start of June before hitting the north Wales coast the previous week. Of course they could all be different birds but equally it could just be the same bird making a grand tour of the country.


Anyway, the bird turned up again at Goldcliff Pools on Saturday. Now, weekends are generally not so good for me as far as twitching is concerned as I'm mostly tied up with family stuff. I could only watch with frustration from afar as the bird was reported all day on Sunday though as it was Father's Day I felt that I had to be at home so that my lovely children could dote on me - I don't think that my buggering off for the day would have cut it somehow! With the bird still thankfully present on Sunday evening I started to put together a plan for a Monday sortie. Given the relatively short distance (well under two hours) I decided that I would set off on positive news on Monday and so I went to bed with this plan.


Heavy rain was forecast for the whole morning, both in Oxford and in Newport and this was indeed what I awoke to. There was no immediate news though the combination of the poor weather and the fact that it had been showing well all weekend probably meant that there weren't many people out there looking for it. In the end I put out a RFI on RBA though there wasn't an immediate response so I took our son to school and waited. At around 9:15 a.m. news came through: it was still there! I sprang into action, getting my stuff together and making a nice packed lunch, did a quick chore for my VLW and then set off at around 9:45 a.m. though in my haste I managed to leave my packed lunch behind in the end (doh!). The journey was uneventful though I stopped for petrol and to try and buy some lunch at a service station only to discover that they didn't have an gluten free sandwiches (my digestive system isn't very good with wheat these days) so I had to make do with a collection of fruit, sandwiches and some rather dodgy oat flapjacks. Then there was a 20 minute queue at the Severn Bridge tolls, such was the volume of traffic going though so that it was about two hours after setting off that I finally pulled up at the familiar entrance to the Goldcliff Pools complex and hurriedly tooled up. I met a returning birder who informed me that the bird was still present from it's now-preferred sea wall hide location (the furthest hide away of course!). Spurred on, I yomped off down the path, noticing how different it all looked this time round now that the summer vegetation was out. Last time the Hemlock Water Dropwort hadn't even begun to flower whereas now it was past its best. There were loads of Buttercups along the path and I spotted some interesting flowers as I hurried along the path and made a mental note to try and find them again on the way back.


I finally arrived, rather out of breath, at the sea wall hide to find that the bird was thankfully still present and indeed on show. I asked for a peep through someone's scope and (unlike at Titchfield) I was immediately able to see the bird though it was very hunkered down and asleep. I set up my scope and soon found the Sandpiper for myself and settled down to wait for it to move. It was located along the shoreline right in front of the hide though a bank and some tall grasses meant that most of the muddy shoreline was obscured though one could just see where the mud met the water (the most important part where waders are concerned of course!). The Sandpiper would occasionally raise its head and I was then able to take in the striking split supercilium and decurved bill, slightly kinked towards the tip. Then suddenly it woke up and flew a short distance along the shore to where it was completely obscured by the sedge along the bank top. No one in the hide could see it any more though there was a lot of peering through gaps in the sedge, trying to pick things out. Eventually we collectively worked out that there were three Ringed Plover (two adults and a juvenile) and four Dunlin all sleeping away but none of us could see the Sandpiper.


There was nothing for it now but to wait for it to wake up. Time passed, I forced down my disgusting oat flapjacks and stared out of the hide window. There were a few Tufted Ducks on show, a smattering of Shoveler, a family of Canada Geese, an Avocet family including a pair of reasonably mature juveniles, some Mallards and a distant Egyptian Goose. Someone spotted a Buzzard and a young Lapwing was flapping about in front of the hide. It was all very peaceful but rather frustrating. As I stared out the hide window I started to wonder whether one might be able to get a better view of the area in front of us from another angle and went out to do some reconnaissance. I made a couple of trips and reported back that I could see three sleeping Dunlin but that was it. One or two other people went to have a look but also reported no success. In the end boredom got the better of me and I took my gear and decided to work my way along the seaward shore to see if I could find a vantage point from which I could see the relevant area properly and one or two other people had a similar idea. From the south east corner I could see back distantly to most of the area though still I could only see three sleeping Dunlin. In the end I gave up and headed back towards the hide.


Just before the hide I was greeted by the sight of all the birders outside the hide peering over the bank intently - this was clearly a good sign. It turned out that a  lady from the hide had taken a leaf from my book and had managed to turn up the bird. It was hunkered down asleep near some Dunlin but was so well hidden that it was very hard to see. Indeed, despite peering through someone's scope who claimed to have it in view I couldn't see it though eventually with some help from the others I managed to find it for myself and once I had my eye in it was relatively easy to re-find and I helped some newcomers to get onto it.


One of the newcomers turned out to be Terry Sherlock from Oxon so I got him on the bird whilst we chatted away. The wind had dropped and it had become pleasantly warm as we sat on top of the bank watching the sleeping Sandpiper, which would occasionally wake up and have a preen before going back to sleep. Terry had a theory that the birds feed during the rain (to keep their body temperature up presumably) and then once it stops they all have a rest - this certainly tied in with what we were observing. Terry got me to send a grip-text to a fellow county birder who still needed Broad-billed and with whom he has a friendly listing rivalry. We chatted with another birder about this and that: how long we were happy to drive for to see a bird, the birding bonus of taking children to and from university, listing - all the usual stuff.

Terry had decided to stay until the bird woke up and was going to wait until after the rush hour before heading off whereas I wanted to be back by 6 p.m. so I gave it until 3:15 p.m. The Sandpiper obstinately ignored my deadline and stayed put so eventually I gave up and headed back, looking for the various flowers that I'd seen en route to the hide. In amongst the grasses and Buttercups were some Grass Vetchling and Smooth Tares like small hidden jewels tucked away in the green. I came across some Celery-leaved Buttercup which was a new plant for me and spotted a few Meadow Browns flitting around as I went.


Back where I'd parked there was a wonderful meadow just crammed full of flowers - it was heaven! There was Meadow Vetchling, Bush Vetch, Buttercups galore and I managed to root out what I think (thanks largely to iSpot) is Corky-fruited Water Dropwort though I find Umbellifers frustratingly difficult still. There were a few butterflies and I spotted a Large Skipper during my rummaging. 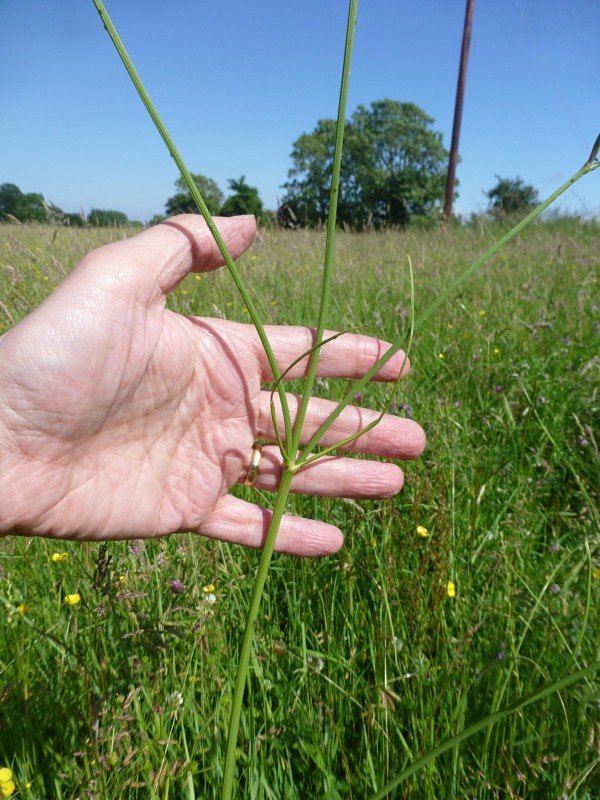 Time was marching on so I couldn't botanise for too long and reluctantly I climbed back into the Gnome mobile and headed off for home. Thankfully there were no disruptions on the way back and it made the journey in an hour and a half, stopping off on arrival back in Oxford at the Botley Road to pick up a birthday present for our son who's going to be ten this week. I can't believe that - where has the time gone? I arrived back into the bosom of my family for my usual celebratory cup of tea, to catch up with their news and to bask in the warm glow of a most welcome revenge tick.
Posted by Adam Hartley (Gnome) at 12:48