Regular readers will remember how on my way back from the Friday night Purple Swamp Monster dash to Minsmere I tried for but failed to see Willow Emerald damselfly at Alton Water in Suffolk. Now this species flies until at least the end of September so in principle I had time for another go but in truth the prospect of slogging all the way over there again was too much so I was resigned to leaving it until next season now. However, I recently discovered in the excellent Facebook group "UK Dragonflies and Damselflies" that there was a large colony in Surrey on the lakes on Earlswood Common which would be only about an hour and a quarter away. So, armed with some detailed instructions on where to look courtesy of some kind people from the Facebook group, I took advantage of the relatively nice window of weather on Wednesday and set off shortly after 9 a.m.. The journey was uneventful and so at around 10:30 I pulled up in the car park and got ready. There were two lakes there, the lower one by the car park was relatively open with few bank-side trees whereas the further upper lake was densely surrounded by overhanging trees on three sides and this was where the damselflies liked to hang out because of their breeding habits. Willow Emerald lay their eggs in the stems of trees that overhang still or slow moving water with the trees developing distinctive galls as a result. The eggs overwinter and then hatch in the spring whereupon the larvae drop down into the water to complete their life cycle within just three months. So dense overhanging bank-side vegetation was ideal for them.


I'd been given some specific instructions on the hot-spot area to look for them so I wandered over there, scouring the trees as I went. It was still relatively early though and most of the lake was surrounded in deep shade so it seemed a near impossible task to pick anything out as I went. The hot-spot consisted of a single Oak tree which I soon found but it too was in deep shade by the lake side. So I moved around to the far side which was by the edge of a gold course and therefore not being shaded by any other trees. Here this side of the tree was bathed in lovely golden sunshine. I scanned up the tree and found several Hornet Mimic Hoverflies before catching a glimpse of a flying Damselfly - that had to be one! Eventually I picked one out sunning itself on the top of a leaf and took a record shot photo.


With the target already successfully acquired my next task was to try and get some decent photos. Near the Oak tree there were some Brambles and some smaller trees including an Elder Tree and some small Willows. I scoured this area carefully and soon found another one. This was much easier to photograph and I settled on this area as the place to watch. I would regular see one flitting about, surprisingly ephemeral and difficult to see but if you kept your eye on it you could see where it landed and I was able to get some decent shots. 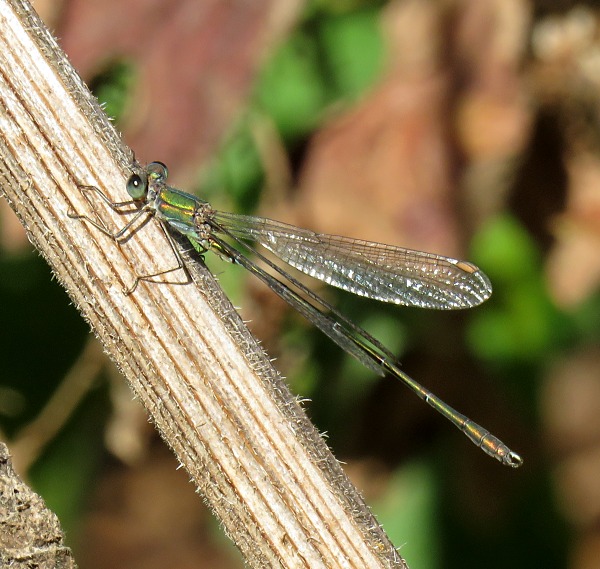 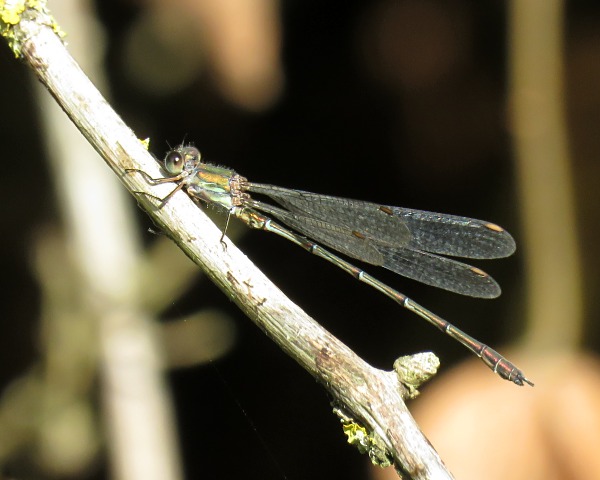 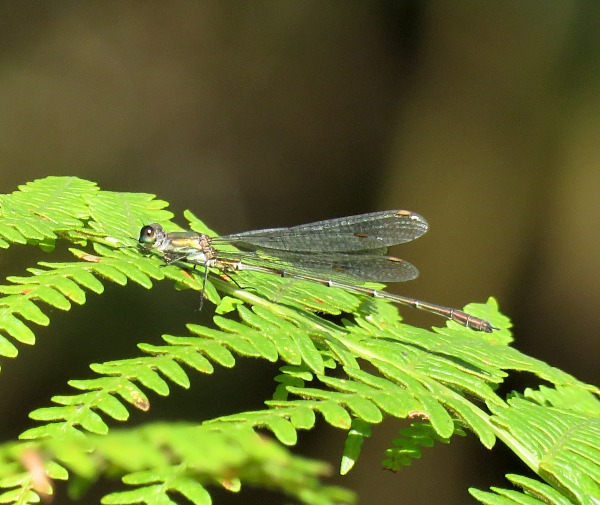 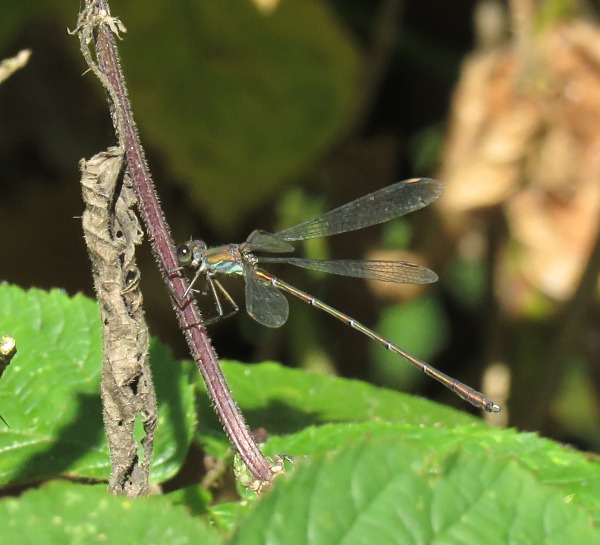 After a while I decided to explore the other side of the upper lake to see if I could find any away from this hot spot. I found the same problem as before: the bank-side vegetation was so thick that it was impossible to see much at all. The lake-facing sides of the overhanging trees along the north shore were bathed in lovely sunlight and I'm sure that there were loads of Willow Emeralds three but it was just impossible to see them - perhaps I needed to hire one of the boats there. On the south side of the lake I met a man with binoculars who asked me what I'd seen. I explained that I was actually looking for Willow Emeralds and he got quite interested. Like me, he was a birder who did Dragons and Damsels in the summer and although he didn't have long in the end his interested was piqued enough to follow me back around to the hot spot where I tried to pick one out for him. Sadly, at the age of eighty his eye sight wasn't so good but in the end I found a nice close one for him to see and he left very content.


Time was marching on for me too so I decided to head back. With the sun now higher, there was one spot on the south east shore which the sunlight was now reaching and I did indeed manage to find a Willow Emerald there. Out by the southern shore there were several Migrant Hawkers and Common Darters about and I even found a few Common Darters back at the lower lake. Very pleased with my trip, I climbed back into the Gnome mobile and set off for home, arriving back in time for lunch.


Willow Emerald is rapidly colonising westwards and has indeed been discovered in several new inland sites already this year. I'm sure that it won't take too long before it reaches Oxfordshire but in the mean time this was a very convenient location with which to acquaint myself with these delicate little insects.