On the day before we were all due to head off to Cornwall TW, Oxon's legendary walking birder, found a Bonaparte's Gull on Farmoor Reservoir. Now, whilst this wasn't a county tick for me, given the dearth of decent birds recently in the county I was pretty keen to see it. However, with the family in full preparing-for-holiday mode there wasn't really going to be time for me to nip out for a visit. Whilst we got on with our holiday preps gripping news kept coming out of it "showing well from the causeway" etc. and finally, with most of my packing done though still much to my VLW's disapproval, I caved in and went for it. I'd got no more than 5 minutes up the road when I got a phone call from Ian Lewington saying that it had just flown off high and could no longer be seen. I therefore aborted my attempt and headed back home to try to make amends for having left in mid pack. I've already blogged about my week in Cornwall where I followed the news distantly as the bird was reported for a day or two more before seemingly departing.


Back home the next week I was pootling about in my office on the bank holiday Monday when I got a call from DD saying that the bird was back at Farmoor and showing cripplingly well on the pontoon at the start of the causeway. Needing no further invitation I hurried off to take a look for myself. In the car park I met DD who said that it had flown off the pontoon when some fishermen had arrived there but that it hadn't gone far. On the causeway I soon found the bird, sitting fifty yards off shore feeding on flies. In fact there were only a handful of Black-headed Gulls left on the entire reservoir so it was pretty easy to find. I took a few digiscoped photos but at that distance they weren't great. After a while it came in really close right in front of the sailing huts and I was able to get some nice comparison shots with a Black-headed Gull as well as some video footage. 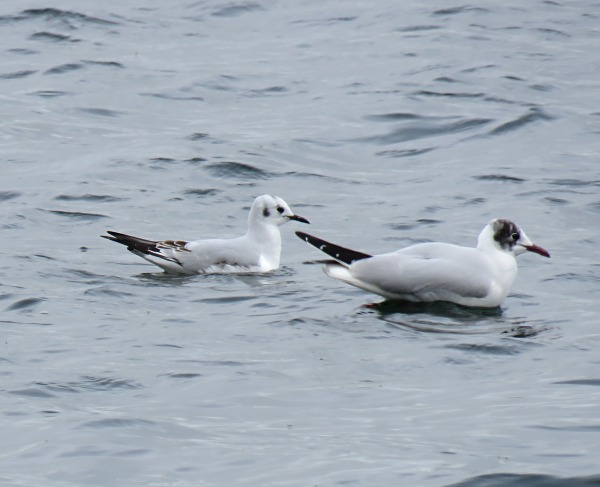 ...and some video footage

The bird has been widely described as first summer though as Lee Evans mentioned to me when I met him subsequently, it doesn't have any sign of a hood so is perhaps more accurately still a first winter bird. Either way, it was great to see it so close up - easily the best views that I've had of this species to date.

Having had my fill of this Nearctic beauty I headed up the causeway to see what else I could find. There were three male Red-crested Pochards close in near the hide - they're always such striking birds. A White Wagtail also dropped in and posed nicely for me. I pootled around chatting to the various local birders who were popping in to pay homage to the Gull. After a while I headed back home to do a few chores for the rest of the morning.


As it was a bank holiday I didn't really want to do any work so that afternoon I decided to head off for a walk and to go and see one of the local floral specialities that is out at this time of year which I'd not seen before: the Pasque Flowers at Hartslock. I'd visited Hartslock last year in May with some of the family to see the Monkey Orchids as well as the Lady x Monkey hybrids but the Pasque Flowers had gone over by then so I'd made a mental note then to try and see them this year. So after lunch I headed off to Goring, parking up at the end of Manor Road as usual before walking on the familiar route along the Thames towards the hills I could see in the distance where Hartslock was sited. As very much a beginner botanist I kept stopping to look at things that I didn't recognise so my progress was often slow though fortunately there's not too much out yet at this time of year to distract me.

Along the river I came across a clump of lovely white flowers which turned out to be Lodden Lily, also known as Summer Snowflake. 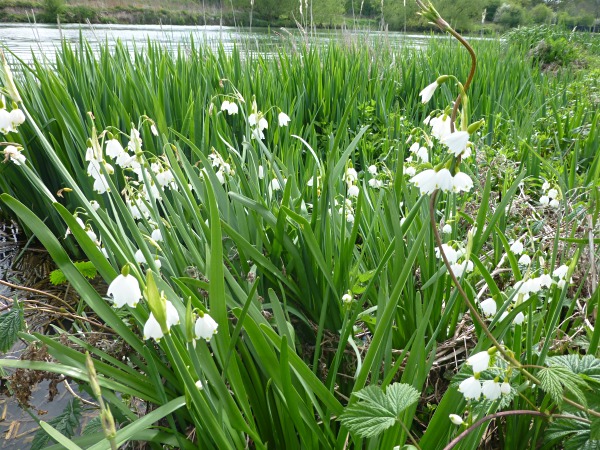 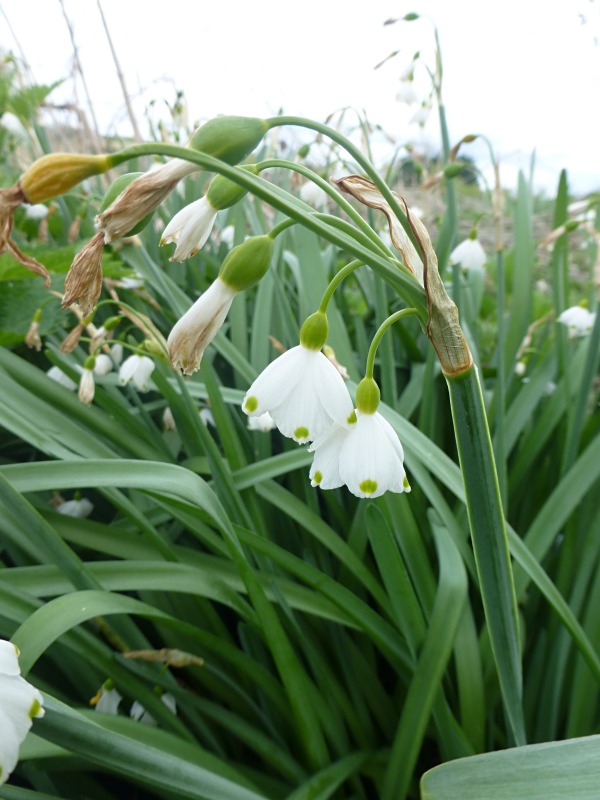 After a while the path turns inwards and away from the river and as I wandered along the track I listened to the spring warblers singing away from within the depths of the hedgerows. Eventually I got to the turn-off for Harslock and began the steep ascent up to the reserve itself.


At the Orchid area, a few were just starting to come up but it wasn't really possible to tell what they were. I'd been told that the Pasque flowers were further on beyond this area on the south-facing slopes and the helpful notice board there also showed where they were to be seen. So I headed off in that direction. By now the cloudy conditions had given way to bright sunshine and this had brought out several picnickers who were camped out at the top of the hillside. Indeed the warm spring sunshine seemed to have made the sap rise for one couple who were canoodling away on a blanket - I didn't know where to look!


I wandered about trying to find the Pasque flowers which should have been relatively easy as given the time of year there weren't many other flowers about at all with just a few of the Milkworts to be seen. I'd more or less assumed that they would be covering a large area but in the end when I finally stumbled across them they turned out to be located in a relatively small patch about two thirds of the way up the hill. Finally seeing them in the flesh, they were indeed very striking flowers and I seem to have caught them in full bloom. I took my time savouring their beauty and taking some photos. 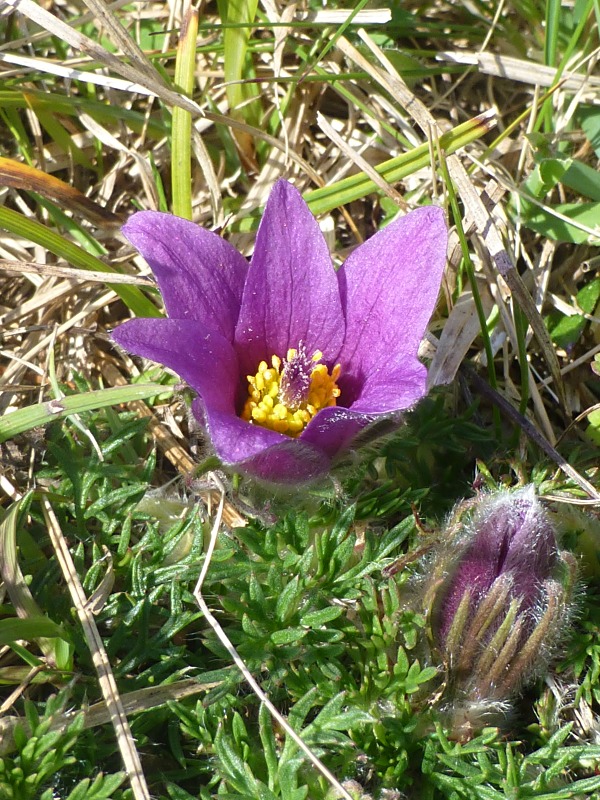 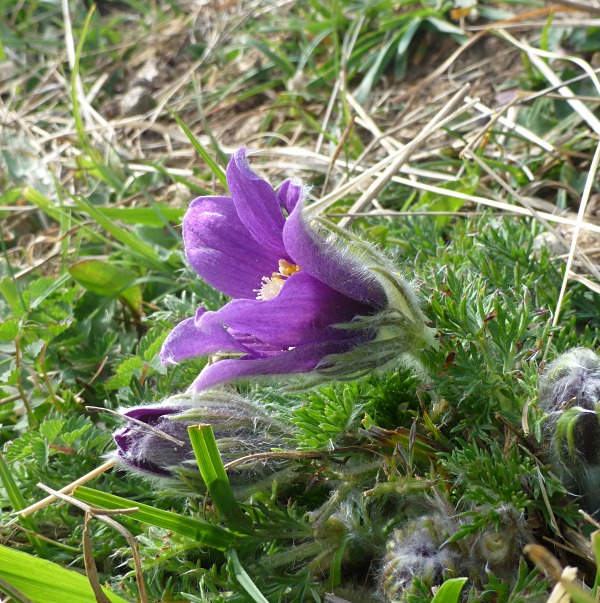 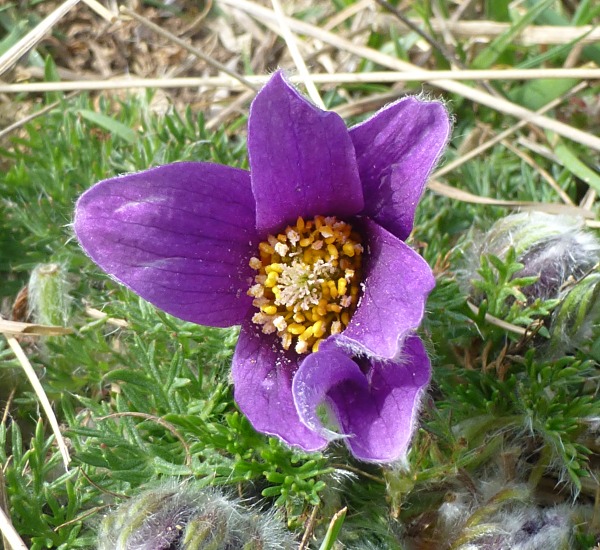 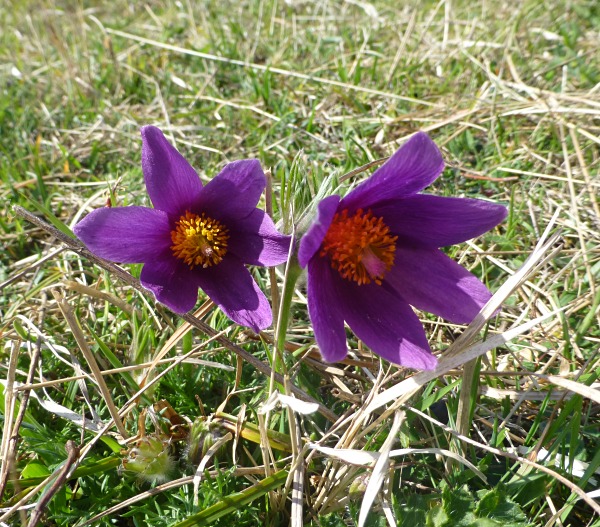 Eventually I'd had my fill and was starting to think about heading back. Over by the Orchid area I thought that I'd have a more thorough look to see if I could find any that were out at all and eventually I came across a single one which was in flower. Luckily it turned out to be a Lady Orchid - the earliest to come out (late April) according to the notice board. I was particularly pleased about this because apparently last year there'd only been two of them on the whole site and they'd been either picked or eaten so hadn't been around when I'd visited. 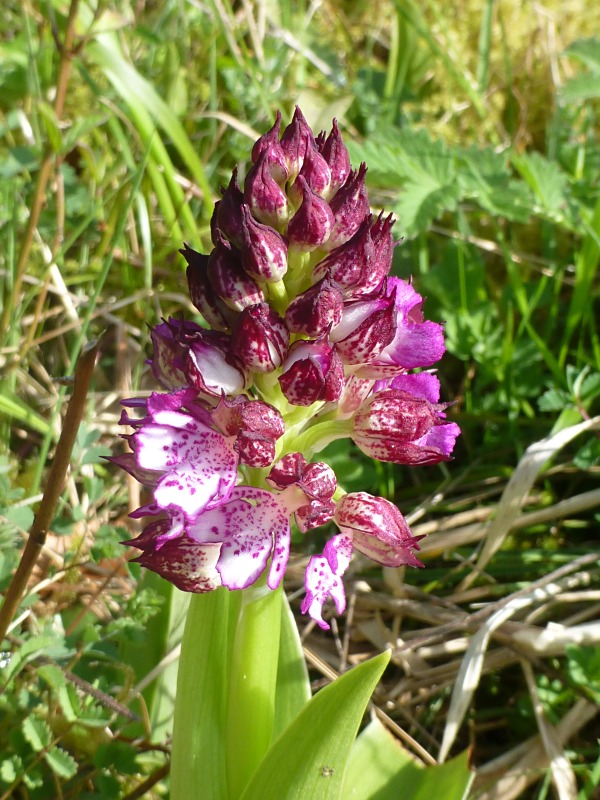 Very pleased to have found these I started to head back to the car, deciding to go the more inland route through the fields, snapping flowers and watching the Swallows hawking over the crops as I went. As I drove home I reflected on what a pleasant day out it had been with a top county bird and some good flowers - what more could you want?