Out on the Wild and Windy Moors...

It was time to take Daughter 1 back up to Durham already. The Easter break is particularly short and it seems like I've no sooner brought her down then I'm slogging back up there again. I've also found from past experience that there often is precious little to see in the North East at this time of year and try as I might I couldn't really find much at all to tempt me. So this time, rather than heading off early in the morning to take advantage of as much birding time as possible, instead we didn't even leave Oxford until after lunch. Fortunately the traffic was very light and we even treated ourselves to a stop-off at a service station for a cup of tea to make for an even more easy-going journey northwards. We arrived in Durham some time after 6 p.m. and had soon ferried my daughter's stuff back into her student room. To keep things really simple we'd brought some micro-waved ready-meals for dinner which we ate whilst watching TV. Then, to save on the cost of paying for a B&B, she headed over to her boyfriend's so that I could sleep in her room on her comfortable bed. Before turning in I did some research on the day's bird sightings and the only thing of interest that I could come up with for the next day was a Great Grey Shrike a little way off the M1 (or so it looked according to the map) on the Yorkshire Moors. Now, normally I wouldn't go very far out of my way to see a Great Grey Shrike but it looked to be in rather interesting habitat that I don't get to visit so often so I resolved that unless anything better turned up, then I'd give that a go on the way back home.


Sunday dawned sunny and warm and with nothing else on the pager so far I headed back to the car and started my journey south. The roads were wonderfully clear and I made good time until I came to my turn-off for the Moors. However, what looked a relatively short distance on the map turned out to be further than I thought and it was a good hour of traveling along relatively slow roads before I neared my destination of Lower Barden Reservoir on Barden Moor.


As I turned onto the narrow road that lead up to the top of the moors I spotted a Red Grouse sitting on a wall by the roadside. Excitedly I pulled over and took a photo with my phone. However, I soon discovered that actually Red Grouse were absolutely everywhere. There was another sitting on the wall right by the car park and they were calling and flying about where ever you looked. I got out of the car and got my stuff together and started down towards the reservoir.

As I wandered down the hillside I was amazed at just how much bird song there was. I'm used to moorlands being rather desolate and deserted places but this area was alive with singing. There were the strange clucks of the Grouse, then there were Meadow Pipits, Lapwing and Curlew all calling and singing away. Down by the farm there were Willow Warblers and Chiffchaff singing in the garden and a Snipe was drumming overhead continually. In the nearby field there were Redshank and more Lapwing, it was just full off life. I wandered about in a most contented manner, taking it all in.

The only slight damper on proceedings was the lack of the Shrike. I met a local birder by the farm who pointed out where it should be but he hadn't seen it all morning so it rather looked like it had gone. I didn't really mind though as I was thoroughly enjoying the scenery and the moorland flora and fauna. The local chap told me that he'd seen some Ring Ouzels further out beyond the reservoir but that the best spot for them was right up at the top of the hill near where I'd parked so I decided to take a look back there instead. I wandered back up the hill to the car, partially in the company of a lovely and very chatty old couple who told me all about the local area and what could be seen.


Back at the car it was only a minute's drive around to the car park at the top of the hill where I parked up and headed off to climb up to the summit. Right at the very top I managed to put up a Ring Ouzel that did a nice circular flight around me before headed over the brow of the hill and out of sight. Further round I found a singing male Cuckoo which posed long enough for some snaps. 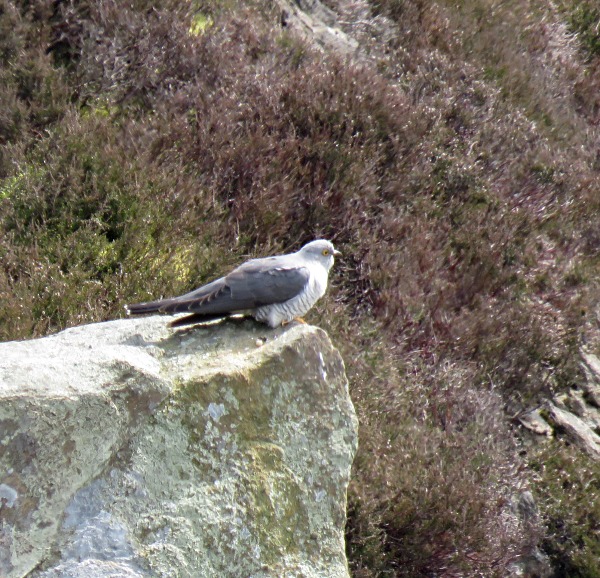 I ended up doing a complete circuit around the peak and finally as I headed back towards the car park I spotted a male Ring Ouzel, looking very much at home in amongst the rocks and boulders. It was rather distant but I took some super-zoom shots for the record. 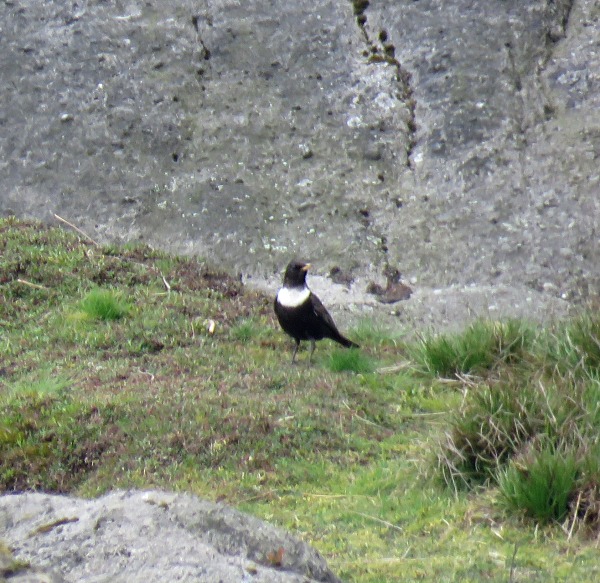 Back at the car I was rather surprised to see how late it was: it was after 2 pm and I was still more than three hours from home. Still with the radio to keep me company the time passed reasonably enough though as it was now Sunday afternoon the traffic wasn't as good as this morning. Finally I arrived back home late afternoon for my customary cup of tea and a chance to reflect on what had been a surprisingly enjoyable trip up to the North East.