It's been a somewhat frustrating couple of weeks since my last posting though it ultimately ended with a most rewarding twitch. I mentioned the impending North East Uni run in my last post - well, sadly that turned out to be most disappointing due to the vagaries of the tantalising Scop's Owl. Having apparently disappeared on the Friday (when I went to Landguard), it then re-appeared on Saturday leading me to re-kindle my hope of a great potential tick on the Uni run the next day. However, Sunday morning it was AWOL (or AOWL - absent owl!) once more so in the end my daughter and I headed off for the North East late than planned at around 10 a.m. and with no other obvious targets to aim for (there were prevailing strong westerly winds which is generally pants for east coast birding) I just loafed around at my daughter's place all afternoon with a plan to try for the owl again on the Monday morning. After all if it had disappeared and the re-appeared once before then there was a chance that it could do so again.


On Monday I was up early and headed off on the thirty minute drive from Durham to Ryhope where, in very strong winds I headed hopefully down the path under the railway line to Ryhope Village Dene (a dene being the local name for a small valley that follows a stream to the sea). Mercifully the small valley itself was nicely sheltered though despite extensive searching in it's usual Elder (which I recognised from internet photos) as well as every other possible tree I could find, there was no sign of it. A showy Spotted Flycatcher and a fly-over Redpoll were little consolation for what would have been a great tick had it been present. In the end I had to endure the long slog back down south having had no proper trip birdage at all - most uncharacteristic for the October Uni run which is usually far and away the best Uni trip of the year.

Since that ill-fated trip I'd not really done much birding at all. My local Port Meadow patch is still non-existent thanks to the lack of sufficient rain to re-create the flood waters and I've mostly been occupied with work and other matters. I had been keeping half an eye on Cornwall with a view to making a dash down there should the birdage warrant it. However, with strong prevailing south westerlies the whole time there was precious little to tempt me. Finally on Thursday afternoon something cropped up on the radar to alleviate the bordeom: a first winter male Rock Thrush had been found at Blorenge of all places. This was a name that I recognised, having been there once before back in June 2010 for a wonderful male Marmora's Warbler (see my write-up here). Well, it seemed that this most improbable of locations had once again pulled in a rarity. As this site was only just over two hours away and well within my acceptable twitching distance I pencilled in a trip the next day on news. Sadly with the dawn came no news and by 9 a.m. I'd resigned myself to another boring day of work. Miraculously however, at just after 10 a.m. it was re-found, frequenting a different location from the previous day but I was reasonably confident that now that it had been re-located, it would be around for the rest of the day so I set off just after 11 a.m., opting for the more pleasant and scenic A40 route rather than down along the M4 and up again. Occasional news came through of the bird's continued presence during my journey and so it was that a little after 1 pm I found myself driving up the familiar Blorenge mountain before turning off for Pwll du Garry where I added my car to the large collection there and in a very strong wind, got tooled up before heading off on the fifteen minute walk towards the quarry area.


As I walked there were birders coming back the other way though rather unusually for such an occasion there was little friendly chat as we passed. I don't know if it was the strong wind or the bleakness of the location but it was a strangely quiet affair each time as we trudged past on our respective paths. I got to the first quarry where I'd sort of expected the bird to be located only to find that this impressive area was completely deserted and I had to head on further. Past the first quarry there was a small path off into the bracken and up the hill where others were coming back - had they not been there I'm sure that I would have missed the turn-off. Here there was actual communication and I was told that the bird was showing every ten or fifteen minutes or so and just to keep going to the end of the line of twitchers which I duly did. There seemed to be some uncertainty as to where exactly the bird was located. Three people were intently looking into one side of the screen slope whereas most others were spread out along the path all staring at different places. In the end I headed to the far end of the line where I soon spotted a familiar face in the form of DL from Oxon. It didn't take him too long to spot the bird briefly in the rocks that were at the top of the slope - not an easy spot to view from where we were all located.


After I'd got my eye in, it was relatively easy to find the bird. As promised, it was showing every fifteen minutes or so, in amongst the rocks. Sometimes it would just perch there not doing much, other times it would hop relatively slowly from rock to rock before dipping down to feed where it would be hidden from site. I set about trying to take some digiscoped photos though in the very gloomy light and scope-shaking wind it was a near impossible task and they all came out pretty poorly. 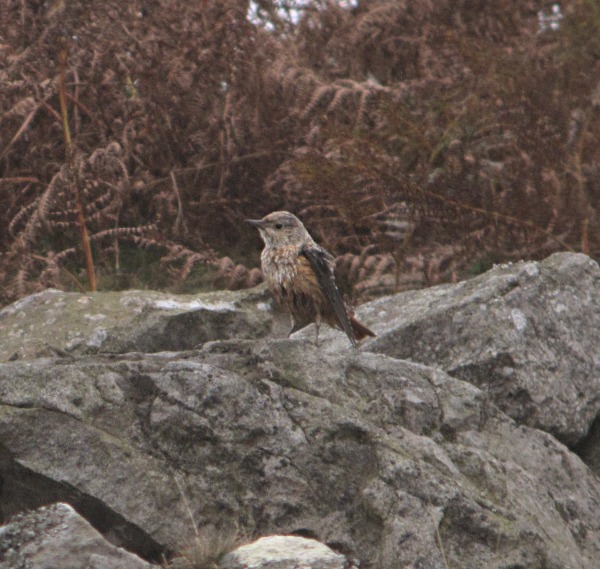 The bird was very striking - moulting from juvenile to first winter plumage it still had the very mottled appearance of a female Rock Thrush but with the adult male red breast and tail feathers starting to come through. It was similar in size and shape to the Blue Rock Thrush that I'd enjoyed in the Cotswolds at the end of last year - who would have though that I'd be seeing both Rock Thrush within the space of a year, both relatively close to Oxfordshire!


People came and went and after the usual initial panic as they arrived, everyone managed to see the bird. Viewing conditions were never ideal, with the poor light, strong wind and difficult uphill viewing angle all making it rather difficult but the bird was pretty cooperative and one couldn't really complain. As time wore on the weather worsened and a mist started to descend on the hill which clogged up my lenses and I eventually gave up trying to take any better photos. 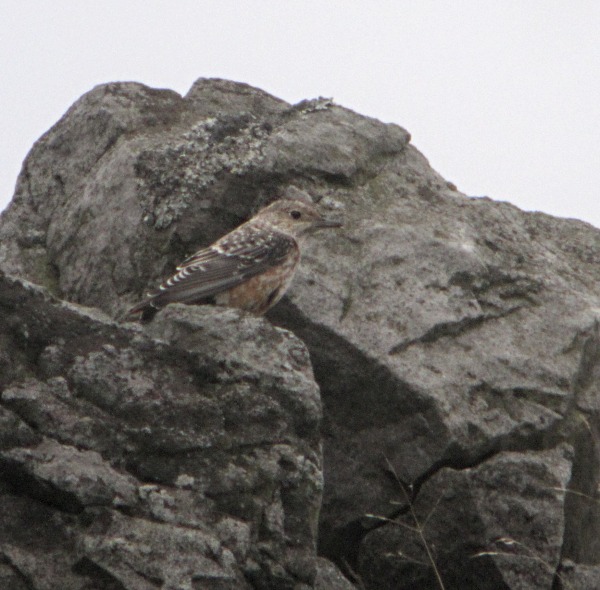 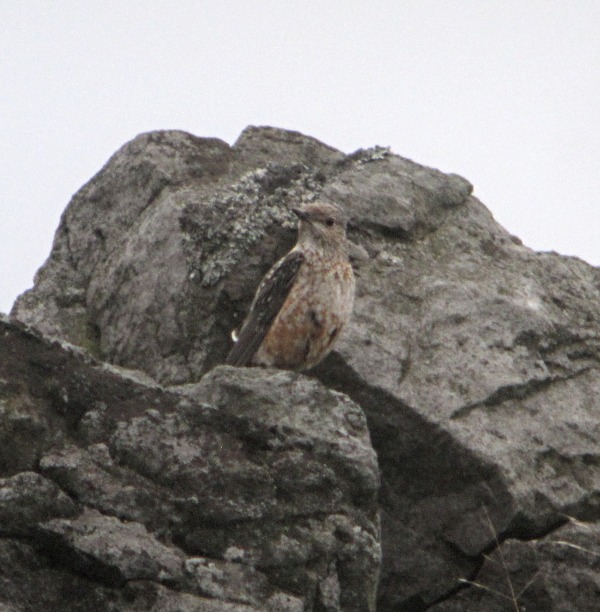 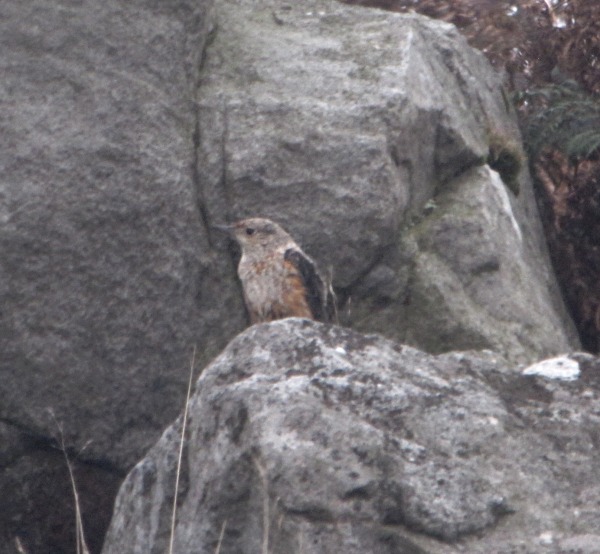 Eventually, at some time after 3 p.m. I decided that I'd had my fill and started on the long slog back to the car in the strengthening wind and increasing mist. Back at the car I was just watching another birder striding down the road towards me in the ever deteriorating weather when I realised that I knew him - it was MS from Cornwall! He told me that he'd started out from PZ at 5 a.m. that morning and had got as far as Bristol when the dreaded "not present" news was posted. So he'd turned around and had got all the way back to Truro by the time it had been re-found. So it was back around once more and he'd only just arrived as I was departing. That was a long old time on the road to get there! I wished him luck, fired up the Gnome mobile and pointed her in the direction of home. With the dulcet tones of Radio 4 to keep me company the return journey's miles slipped away and I was back at Casa Gnome before 6 pm, in time for my usual celebratory cup of tea and dinner with my family. It had been a great day out with a most rewarding new tick to my name.