It's been a rather tantalising few days recently for me. I'm due to go on the autumn Uni run up to the North East in a few days and when news broke of a Scops Owl just a short drive from Durham during the week I got all excited and nervous at the same time. Could it stay for four days until I was due to head up there? I did try to persuade my daughter that she might want to go up early but alas this wasn't possible. One day later it was still roosting in the same general area but on Friday morning it was reported as having gone - I was most disappointed! Partially out of "revenge" for having missed a great opportunity and partially because I'd been having a difficult week at work and needed a break I decided to take Friday off anyway and to do a spot of filthy twitching. The most obvious candidate was a Red-throated Pipit at Languard NR in Suffolk, next to Felixstowe, which had been present and "showing well" for a couple of days now. Now, this was a species which I'd not seen before and which is normally very hard to twitch as it usually is seen just as a fly-over, making it's distinctive down-slurred call. I did rather regret not going for the twitchable bird in Derbyshire a few years back so when this one seemed well-settled and relatively easy to connect with it was very much on my radar. The only trouble with this plan was that come Friday morning there was reportedly no sign of the bird! That rather put paid to my plans though at around 10 a.m. news came through on RBA that it was still around and so I hurriedly put together a packed lunch and loaded up the Gnome mobile and headed off eastwards.


The Sat Nav was saying about two and a half hours though I was somewhat sceptical. Still I made good progress along the M40 and around the north side of the dreaded M25 though when I turned off onto the A12 it was very busy. Eventually I was on the home straight towards Felixstowe and turning off down some side streets. There was a little hiccup in my plans in that the Sat Nav mistook a path for something navigable and so took me down the wrong road and I had to double back before finally parking up in the correct location that I recognised from Street View and tooled up. There had been no further news on the bird at all since the initial message which was in stark contrast to previous days where there had been a steady stream of updates and to be honest I'd started to resign myself to this all turning out badly. As I walked through the entrance gate I met a birder who confirmed my worst fears, informing me that sadly it hadn't been seen since the initial report more than three hours ago now and so it was with a heavy heart that I headed up the path to see what I could find. This disappointed birder had clearly come along way and his parting words as he was about to leave were "no doubt you'll walk straight into it now that I'm leaving". Sadly I thought that this was rather unlikely.

About fifty yards down the track I found a promising line of birders all looking intently through their scopes.


I hurried over to see what was occurring to discover that they were grilling a candidate Pipit intently trying to work out if it was the Red-throated. They'd just come to a positive conclusion on this as I reached them so in a panic I assembled my scope and tried to get on the bird. It was remarkably close and relatively easy to pick out from the three or so Meadow Pipits it was with. The birds were frequenting a large close-cropped flat grassy area bordered by bramble bushes and despite the poor light conditions it showed continuously at relatively close range as it fed contentedly

The most striking thing about the bird was the strong contrast between its paler and darker feathers compared to the Meadow Pipits. In particular the two "tram lines" down the back were very bright and really stood out in comparison to the dull "tramline-less" backs of its commoner cousins. Also the pale edges to the tertials were very striking in this respect. As far as the head was concerned, it had a pinkish blush to the lower throat area and a very strong black wedge on the side of the throat below the end of the moustachial stripe. All these subtle diagnostic clues were easy to pick out at the close range of about thirty or forty yards distance at which the bird showed. 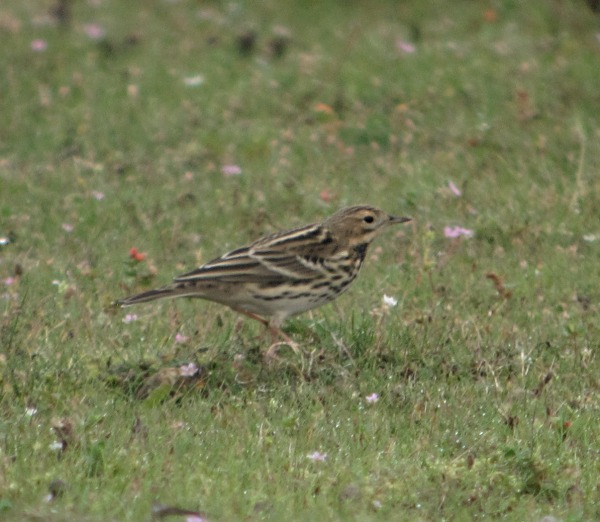 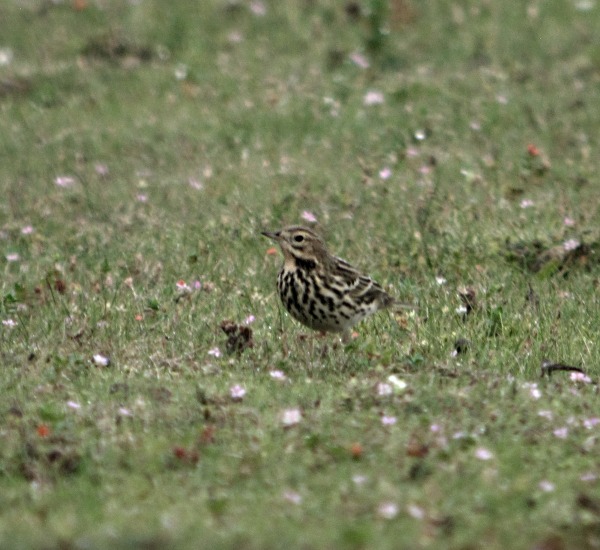 In the twitch line one person mentioned how someone else had come all the way down from County Durham to see this bird but had had to leave without seeing it. Could this have been the birder I'd met as I arrived? I thought back to his prophetic words and wondered whether he was going to turn around again now that the news was out on RBA about it being around again. There's nothing worse than dipping only for the bird to be reported as still present on the return journey.


I watched it contentedly for about twenty minutes before deciding to have an explore around. I was rather conscious of the time as I didn't want to get too caught up in the rush-hour traffic around the M25 on the return journey. However as the whole reserve looked fantastic I wanted to have a good look around whilst I was there. There was a roped off shingle area for nesting birds and to protect the plants (Yellow Horned Poppy and Sea Pea apparently) and I'm sure that had it been earlier in the year I'd be constantly distracted by all the interesting plant life there


I wandered around in a contented fashion taking it all in. I met up with another visitor who was a regular local visitor but not particularly a twitcher so he wasn't interested in seeing the Red-throated Pipit as apparently, it wasn't striking enough to look at.  Over by some houses we spotted a bird flitting on and off a wooden fence which turned out to be a rather nice male Redstart. There were at least four Wheatear knocking around, a Swallow zipped over heading south and quite a few House Sparrows and a Stonechat were hanging out by the buildings.

Someone told me that the rare Stinking Goosefoot was to be found over near the observatory so I went to see if I could find it. However, despite a good search over the entire area I couldn't turn it up - I guess it was too late in the season.


I headed back to the main Pipit area to find that it had flown a while ago and was presently not to be seen. I milled around for a bit longer before decided that it was time to hit the highway so I headed back to the Gnome mobile, quickly finished off my packed lunch and then fired up the car and headed for home. The traffic was predictably full and there was some modest stoppage on the M25 but all in all it wasn't too bad a return journey. I arrived back home at Casa Gnome just before 6 p.m. with a shiny new tick to my name and feeling pleased with the spoils from my excursion.