Red-rumped Swallow - Not So Grim Up North

Last Friday I was just gearing up for the start of the working day when news broke from the north of the county up at Grimsbury Reservoir that a Red-rumped Swallow had been found. There have only been three previous records of this national rarity with the last one being at Farmoor in May 2012 which I managed to see, so it wasn't going to be a county tick. Still it was only 30 minutes away and with only a modest amount of walking at the other end it seemed like too good an opportunity to pass up so I threw on some clothes, fired up the Gnome Mobile and headed northwards. Despite the heavy traffic coming into Oxford, going out was fine and so it was that almost exactly 30 minutes later I was pulling up at the reservoir. Given the very overcast conditions with rain threatening at any moment I wasn't too worried about the bird moving on: this was perfect weather for keeping it in one place. A quick text enquiry ascertained that the west side of the reservoir was the side to be on and I yomped off to find a small group of twitchers right at the far end so I hurried to join them. As soon as I arrived JT put me on the bird which was hawking low over the water in overcast conditions. I watched it for a few minutes before losing sight of it.


A short while later JD messaged to say that he was watching it down at the other end of the reservoir so I hurried back to that end (thank heavens Grimsbury is such a small reservoir compared to Farmoor!) to find that it was coming regularly to sit on the railings of the small pontoon that jutted out into the water, offering sitting views of no more than 25 yards or so. I waited patiently and a short time later it did indeed return. I was able to get some great shots of it with both my superzoom and my digiscoping gear. 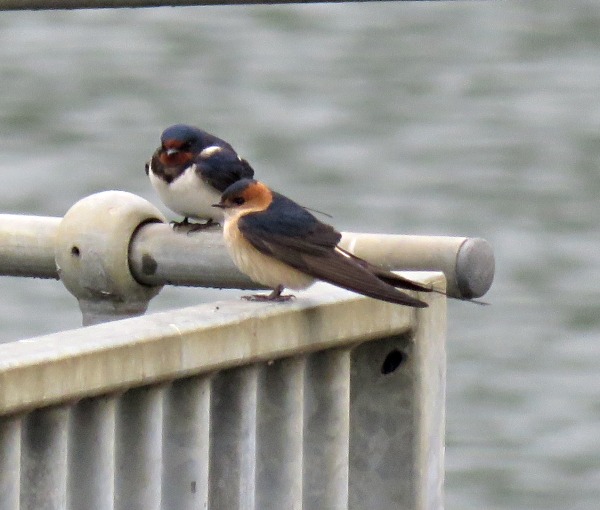 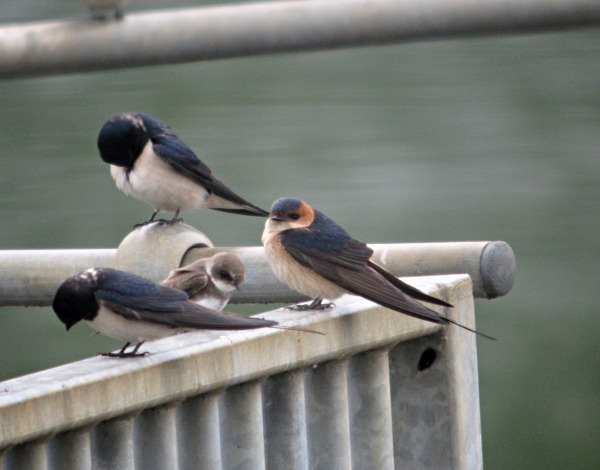 You couldn't really ask for better views of a Red-rumped Swallow - so often it's just distant in-flight views that one gets so this was something special and more than made up for the nasty dip of this same species that I'd had in Cornwall earlier in the year.


After a while as the weather lifted it moved off and restarted feeding over the reservoir. Having had such great views of this gem of a bird I felt that there wasn't any need to hang around and I headed back home, a most contented bunny. As I write this some five days later, the bird is still around, so it's turning into a bit of a long stayer. Who knows I may even go for seconds!