Any half serious birder will be aware that this year is an irruption year for Rose-coloured Starlings. This species breeds in the steppes, semi-deserts and deserts of Central Asia and Southeast Europe but is strongly migratory, overwintering in India and tropical Asia. However when there is an abundance of grasshoppers and other insects then it will irrupt far beyond its usual range which is why they are turning up in such numbers in the UK this year.
Readers might remember that back in June when I went to see the Blyth's Reed Warbler at Far Ing in Lincolnshire, I did contemplate heading a bit further north to see the then resident Rose-coloured Starling at Collingham, Yorkshire but decided in the end not to. This has meant that despite this plethora of birds across the country I'd still yet to see one this year. What's more, of the various Rose-coloured Starlings that I've seen over the years (one in Oxon at Forest Hill and at least three in Cornwall) they've all been juvenile birds. Nice enough of course but I must admit that I'd been admiring the sheer beauty and colourfulness of the adult birds in the various photos this year and had mentally pencilled in making a bit of an effort to see one should the opportunity present itself. However, with sightings now starting to dwindle nationwide I was wondering if I'd missed the boat.
Fortunately Gods Own County of Oxfordshire came to the rescue. By all accounts we're having an excellent year here with a number of goodies such as Hoopoe and Red-footed Falcon already seen. This week, as you'll probably already have guessed, someone turned up a Rose-coloured Starling here in Oxon. This was actually the third such lead that our esteemed county recorder Ian Lewington had had to chase down but the previous two had turned out just to be leucistic normal Starlings. This one however was the real deal. Apparently comging to fat balls in a garden in East Challow, the news broke on Monday evening once the ID had been confirmed. Apparently Ian rang MM who actually lives in East Challow to tell him the news, and just as they were speaking on the phone the very bird in question came down to MM's garden pond for a drink - talk about coincidence! Those quickest off the mark were able to get down there that evening where the bird was seen though it proved rather mobile and elusive. I did contemplate going myself but in the end decided that it was getting a bit late and I was rather tired so decided to leave it until the next day.
The next day, those on site at first light managed to see it on the roof tops of Hedge Hill Rd, near the garden where it was first discovered. However, after a couple of sightings, by early afternoon the trail went rather cold. I'd decided on a visit after work but with no news since 1:30 pm and several people  already on site and not connecting I did start to wonder if I was going to succeed. Still nothing ventured and quite frankly I needed an excuse to get out of the house - this lockdown malarky is starting to "do my head in". So at 5pm I fired up the Quattro and headed off.  Rather stupidly, rather than listening to my Google Maps app's pleadings to go down the Botley Rd, I instead went onto the A34 ring road, thinking that at this time of day that would be quicker only to be met with a huge traffic jam which Google helpfully told me would take at least 9 minutes to get through. Anyway, eventually I was through though it was getting on for 6pm by the time I finally arrived at East Challow and parked up in the village hall car park. There I met SNT who'd just arrived at the same time. Whilst he chose to hang around by the church where it was seen at this time of day yesterday I chose to have a wander around. To be honest I was quite relishing the challenge: Starlings are relatively easy to see when they're not in a garden as they like to sit high up where they can survey things. So it was just a matter of wandering about looking at all the high up vantage points until I spotted it. "How hard can it be?" I pondered. At least it wasn't just standing around waiting for a bird to appear - something I tend to get rather restless when doing.
Up near Hedge Hill Road I met up with SB and his wife who'd not seen any sign. I did see quite a few Starlings on the rooftops here but sadly not the bird I was looking for. I did a quick circuit around the area before heading back down the road to check up with SNT, to find that BB had now joined him as well. Still no luck so I went back up the road again for a quick look about before heading back down. At this point, like all birders I started to have a natter about this and that. I was just chatting away down near the church when I happened to turn around and look behind me where I spotted a telegraph wire with a few birds on it. A quick lift of the bins and Boom - there it was! I put the word out so that other people in the area could come and see it and then set about taking photos. Sadly by this time of the day the sun was very low and almost directly behind the bird so conditions were pretty terrible and the quality was of the "record shot" level only. 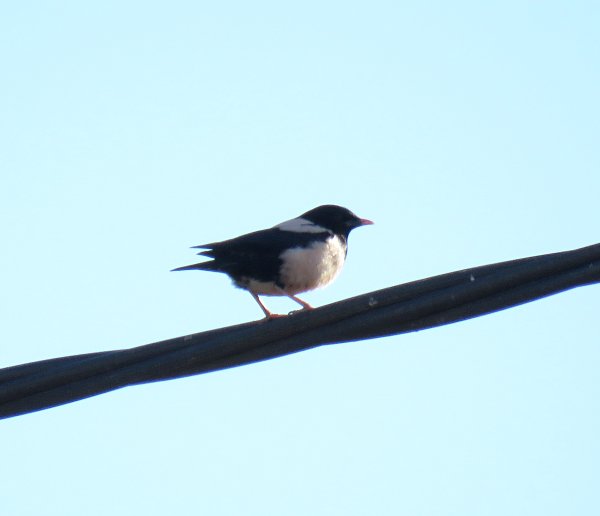 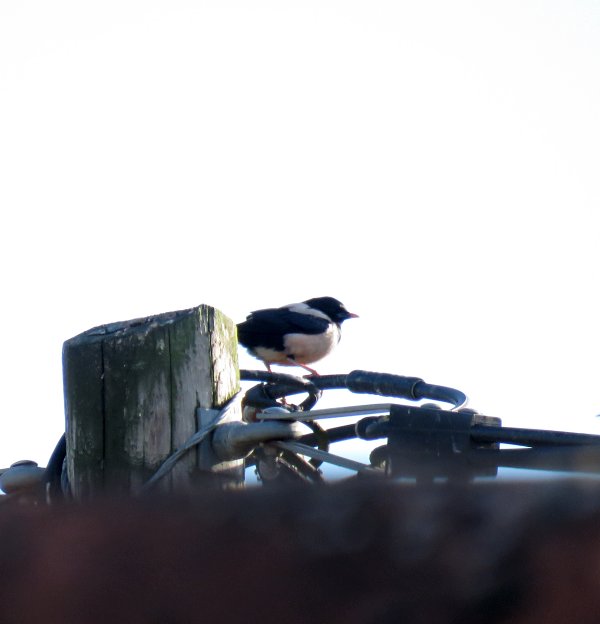 Still it was great to see my first adult Rosy Pastor. The assembled few birders all papped away as best we could though given the light it was a bit of a half-hearted effort on all our parts. After a good ten minutes of more or less sitting there and doing nothing it then flew down and out of sight into what appeared to be a small farm yard of some kind. We all set about trying to find a viewing point into this yard. Whilst the others peered down drives I elected to head up the road where there was a footpath that lead off behind the houses and across the fields. By working my way around the field I was able to get around the other side and have a peer in. I was met with the sight of BB actually in the farm yard - apparently they'd been given permission to enter by the owner whilst I'd been on my detour.
At that moment the word went up that it was in flight. I saw it in amongst a dozen or so Starlings as they flew up from some hidden location and headed towards the tallest tree near the church. I was now stuck on the wrong side of the farm yard and so gingerly picked my was through the cow slurry as quickly as I could in order to join the others who were all papping away furiously as the bird presented itself on the right side of the light, albeit rather high up in the trees. I kicked the superzoom into action and managed a few shots myself. 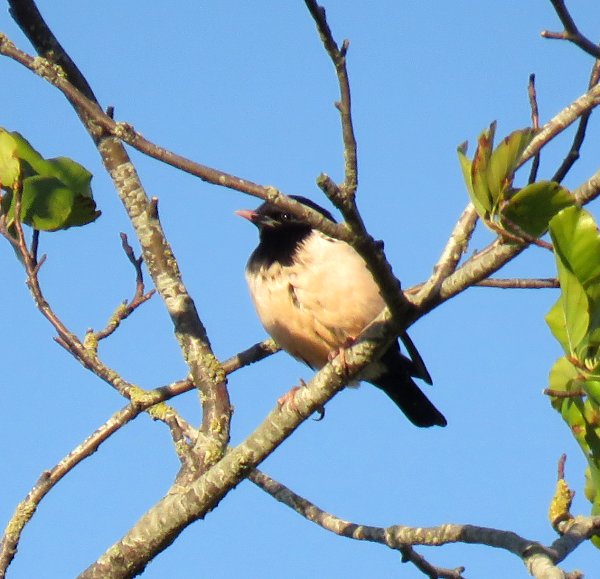 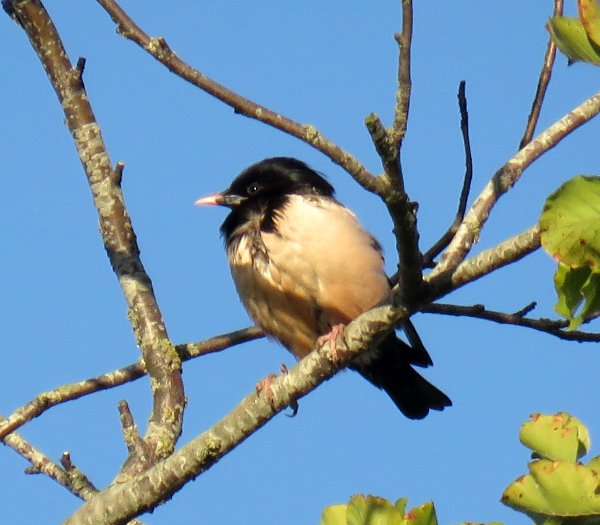 The bird sat there preening for about five minutes before a Hobby came crashing through and put up the entire flock which scattered in various locations. At this point as I'd already got about as good a photo as I was going to get and it was getting late I decided to head back to Casa Gnome, enjoying the comforting glow of a job well done.
I later learnt that the bird wasn't seen again that evening nor was it around the next day so the Hobby must have scared it off from the location altogether. Still I'd managed to see my first adult Rose-coloured Starling and my third good bird of the year in Oxon. Not too shabby!
Posted by Adam Hartley (Gnome) at 08:52