Fortunately for everyone the bird was located on the far side of a creek so was safe from flushing from over-enthusiastic photographers. Instead we were all constrained to view from a sensible distance and the bird seemed unconcerned about our presence. I subsequently have read various reports on how the bird wasn't looking that perky earlier on in the day but to me it seemed healthy enough - I guess that it must have had a chance to dry out and feed up a little. I'd also learnt that it was first found at the start of the day right back at the car park when the saltmarsh itself was still flooded by the high tide but it then relocated on the falling tide to a relatively small patch of sueda with it's creek "moat" to protect it from the marauding hoards of twitchers.The bird was appearing fairly regularly though it was somewhat skulking and after my initial video success I altogether failed to get any more footage or a photograph. Still it was very pleasant to stand there in the wonderfully remote saltmarsh scenery waiting for the bird to appear again in the late afternoon sunshine. A Lap Bunt trilled as it flew overhead. Various flocks of Brent Geese came and went, calling loudly as they did so and a few Redshank and Little Egrets were knocking about.

After a while the bird became more secretive and sightings becamse fewer with longer gaps in between. It was getting late and no doubt it was tired from its exhausting journey so was probably going to go to roost early. I found myself standing next to Penny Clark (she of the Hot Birding and Life blog) and we chatted for a while. On the other side of the bank I spotted MMcK from Cornwall though there was no one else I recognised in the crowd - I guess that the hard core twitchers from Oxon would have already been and gone by this time. A Hen Harrier flew over and headed inland - the first of this species I'd seen in quite a few years. All in all it was very pleasant and I enjoyed the large skies and emptiness of the scenery. I can see how this kind of place can get under your skin.

Eventually I decided it was time to leave and I wandered in a contented manner back along the muddy path in the evening sunlight. Back at the Gnome-mobile I de-tooled, had a very welcome celebratory cup of tea from the flask as well as a snack before firing her up and heading towards King's Lynn. I stopped off at a supermarket for some provisions and to top up the fuel before heading on to the BnB. This turned up to be basic but clean and quiet and after a long and exciting day I spent the evening unwinding before going to sleep fairly early where my dreams were filled with mud, saltmarshes and the sound of calling birds.

Having slept ok-ish, I was breakfasted and out the door a little after 7 am the next morning. My plan was first to head to Holme-next-the-Sea to see if I could catch up with one of four (!!) Red-flanked Bluetails that were persent there the previous day. I'd previously seen this species only once before with the long-staying bird in deepest Gloucestershire in 2014 but as that was a good few years ago now, it would be good to reacquaint myself with this stunning species.

I parked up at the village car park to find a number of other birders already there and searching the bushes around the grassy area that apparently was known as the village green. Having tooled up I spoke to someone who looked like he knew what was what who informed me that one of the birds was to be seen at the back of the green, another was to be found along the other side of the row of firs that bordered the green and the other two were on the golf course in amongst the Hawthorns somewhere. I initially decided to try for the one at the back of the green and duly joined the modest line of fellow birders all concentrating on this section. While we waited a few Pink-feet flew over calling loudly, always a loverly sound!

After a while of nothing happening I decided to have a wander about to see what else was about. Someone had already reported one of the other birds somewhere else so I thought I'd try my luck with one of the others. There only seemed to be a few birders working the other side of the firs so I headed off onto the scrubby area next to the golf course. I eventually came across some fellow birders who'd seen one fly across a gap in the Hawthorn a short while ago but whilst I was talking to them a couple of lady birders nearby motioned that they'd just seen one in flight so I headed over there instead. Predictably it had disappeared into the scrub and after a little while the two finders headed on and I chose to follow them a little way, partially just to get a sense of the lie of the land. I wandered along the path for a few minutes where I came upon a few birders staring intently at some bushes. "What have you got?" I enquired excitedly only for them to reply "it's just a Dunnock". Not the answer I was looking for and I decided to head back to where the Bluetail had last been seen. There I found out that I'd missed a reasonable showing and decided to stay put and stick it out in this location.

It was very birdy where I was. There were loads of thrushes flying about, mostly Fieldfares and quite regularly a Brambling or two would fly over making its wheezy call. More skeins of Pink-feet would regularly go by and various finches including some Redpolls would zip past at regular intervals. If only Oxon were this bird filled! After about three quarters of an hour of waiting the Bluetail briefly popped out onto a branch in a rather dark area under some Hawthorns before being promptly chased off by a Robin - a regular occurrence here apparently. Shortly after that it flew out and into a nearby tree where it gave partially obscured views for several minutes until once again a Robin saw it off. So no photographic opportunities but it was great to be able to reacquant myself with this blue-tailed gem and I decided that it was time to move on.

I'd just got back to the car when news came up of a Pallas's Warbler nearby at Thornham Harbout "in some bushes by the car park". Whilst this seemed like a rather unlikely location for a Pallas's it was on my list of places to visit today anyway in order to try and see some Twite so I made the short hop to Thornham and parked up at the first car park. There I met another couple of birders who were equally baffled by the RBA news. I decided to walk towards the further car park by the sluice gate and when I got there I could see a few birders standing around a modest clump of sueda. Surely this couldn't be it, could it? It turned out it was! Creeping around in this tiny area of cover was one of these stunning warblers. It was constantly on the move and you could track it by who around the bush was staring intently through their bins at the time or trying to take photos. After initially trying to follow the bird I eventually decided to stay put and let it come to me where I was eventually rewarded with some superb point-blank views though I managed to fluff the best photographic opportunity. I loved watching this stripy gem as it crept about in the sueda - it was one of the highlights of my whole weekend. 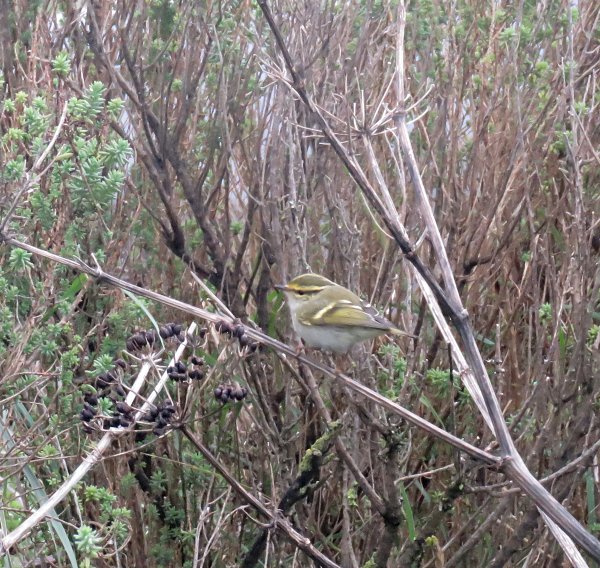 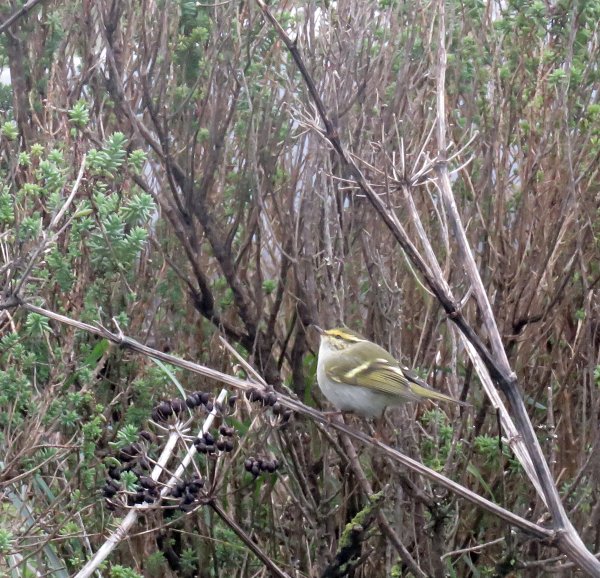 Having eventually had my fill I decided to wander along the embankment a little to see if I could find any Twite. I soon heard some calling only to find it was someone trying to lure them using playback. There wasn't much along the track apart from a large flock of Blackwits on the flooded field and a Grey Plover in flight. I eventually headed back to the car park where I found someone taking photos of a Common Redstart standing on a post.

Someone told me that the Twite had been hanging out nearby on the same posts so I decided to wait around about a bit longer. I met up with PCl and MS from Cornwall, who'd driven down overnight and having seen the star attraction at Stiffkey already were now enjoying the Pallas's as it crept about. They too were interested in the Twite and told me about a Great Grey Shrike at Warham. This species of Shrike is actually probably one of the rarest in Cornwall so it had been a top priority for them though as it's pretty much annual in Oxon I was less interested. After more wandering I heard a Twite calling and found a pair on the same rotting wooden posts. I put PCl on it and we took photos as they posed beautifully for us. I really love the understated beauty of Twite - for some reason they're one of my favourite birds. 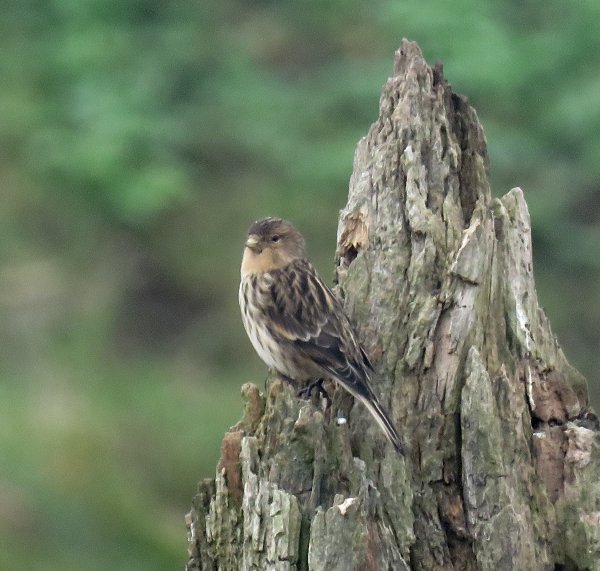 I now felt that I'd "done" Thornham and it was time to move on. The final item on my itinery for today was a return visit to Stiffkey to get second helpings of the Rufous Bush Chat. It took a surprisingly long half an hour to get from Thornham over to Stiffkey but eventually I was pulling up in Green Way again and heading across the muddy saltmarsh back to the same location as yesterday. This time I chose to go over the bridge which was the right thing to do as the bird decided to spend most of its time feeding in the area behind the main sueda clump which would have been impossible to see from the other viewpoint. 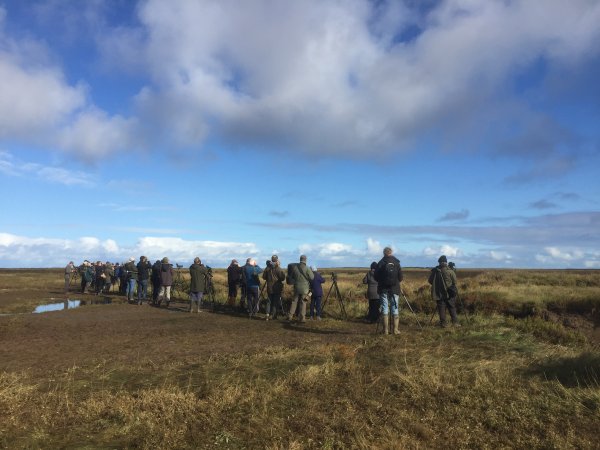 The birds was on show regularly though as it was keeping low and moving constantly it was almost impossible to photograph. In the end I gave up and just enjoyed watching the star attraction and soaking up the atmosphere of the location. A flock of six circling Red Kites passed directly overhead.

As time was marching on and I didn't want to be back too late, eventually I had to tear myself away and head back to the car where I had some much-needed lunch and tea from the thermos. Then it was time to fire up the Quattro and head off for the long slog home. I arrived back at Casa Gnome at around 5pm, tired but happy from my Norfolk birding adventure.

What a beautiful pictures!
If you want to see more photos of birds, I share you my blog.