I've been on a couple of Orchid trips over the last few weeks which I thought I'd write up in a single post here. The first was a brief spur of the moment trip down to Warburg NR in the south of the county specifically to see Lesser Butterfly Orchid which I'd not seen before. I'd recently learnt that this species could be found here so I got in touch with the warden there via e-mail and got back a reply telling me exactly where to go. So armed with this information I made the surprisingly long trip down to the reserve - the narrow winding lane at the end seems to go on for ever! In the warden's office there was a helpful map showing where various orchid species where to be found though I noticed that they hadn't actually marked up the LBO on it. I took a photo of the map on my phone for reference and then headed off to follow my e-mail instructions. It wasn't too long before I was looking at a couple of very much past their best LBO's.


The open paths of the reserve were a riot of colour everywhere and I could have spent a long time rummaging through the flowers there but I was on a bit of a tight schedule so it was just a quick whistle-stop tour of the rest of the area before I headed home.

My next trip was a long overdue one down to Noar Hill NR in Hants. This is a well known site for butterflies such as the Duke of Burgandy but is also a top site for various orchids, including Musk Orchid - the target of my visit. It was going to be another scorching hot day so set off reasonably early in order to try to avoid the worst of the heat. The journey down was uneventful and I was soon climbing the steep path up to the reserve. I'd been studying the location on various maps beforehand but it turned out to be a completely different layout to what I was expecting. It was all so compact with lots of mini hills and ridges one after another.


It was a riot of summer flowers of all sorts there including loads of Pyramidal Orchids, plenty of Chalk Fragrant Orchids though they'd almost all gone over and just a few Common Spotteds. Fortunately I'd been given some very detailed instructions by IE and soon found the Musk area where someone with a camera pointed them out to me. This species is similar to Fen Orchid in that it's a small light green orchid that you really have to look out for carefully though there was a nice clump of them close to the path which made it a lot easier to spot.


Having  quickly found my target I had a general wander around where I managed to find a few more individual Musks tucked away in the grass as well as lots of other lovely flowers. I had been told that there were some Frog Orchids nearby but couldn't find them.

On the way back home I decided to stop off to have another crack at the Burnt Tip Orchids at Ladle Hill - long-term readers may recall that last year I'd gone there but had failed to find this species. A bit of a navigational cock-up meant that I drove around in circles for a bit before eventually arriving at the familiar layby where I was soon off and yomping as fast as I dared in the heat along the path towards the ancient hill fort. Once there I scoured in minute detail the grass along the southern edge of the fort where I'd been told they were to be found but after a good three quarters of an hour I'd not managed to find a single one.


I called IE (my orchid guru guide for this site) up on my phone. He was down in a bog in Hants looking for Bog Orchids but he talked me through which areas they grew (close to the path that runs along the top of the fort on the fairly flat areas) and also what they looked like. Armed with this information I resolved to have one final look and walked slowly the entire length of the southern part without any success at all. Having got into the groove of looking I decided that I might as well push on further around the fort perimeter and finally right on the bend I found what I was looking for.

Once I'd actually seen one and noted the deep dark purple of the tip then I knew what to look for and I soon found plenty more in that general area. The colour was darker than anything else growing there and they weren't as tiny as I'd been imagining. They were such a striking species that I starting to think that this might be my new favourite orchid species. 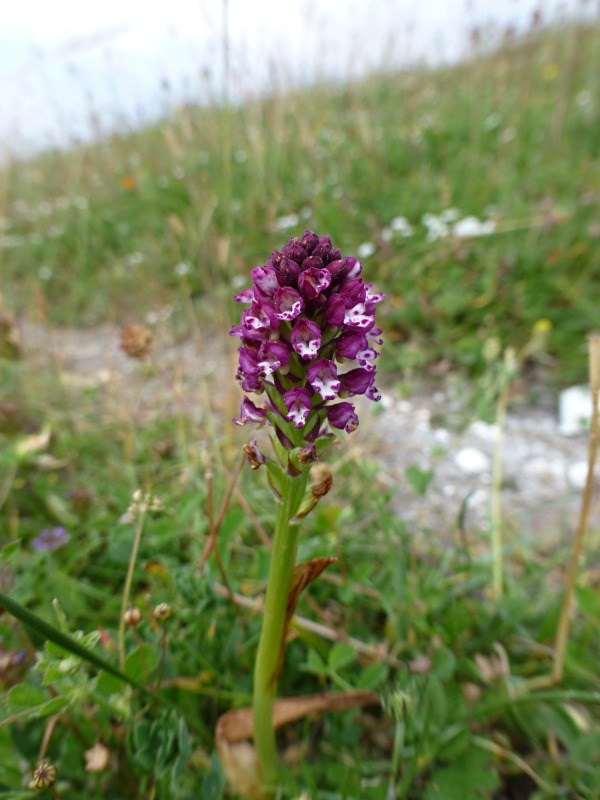 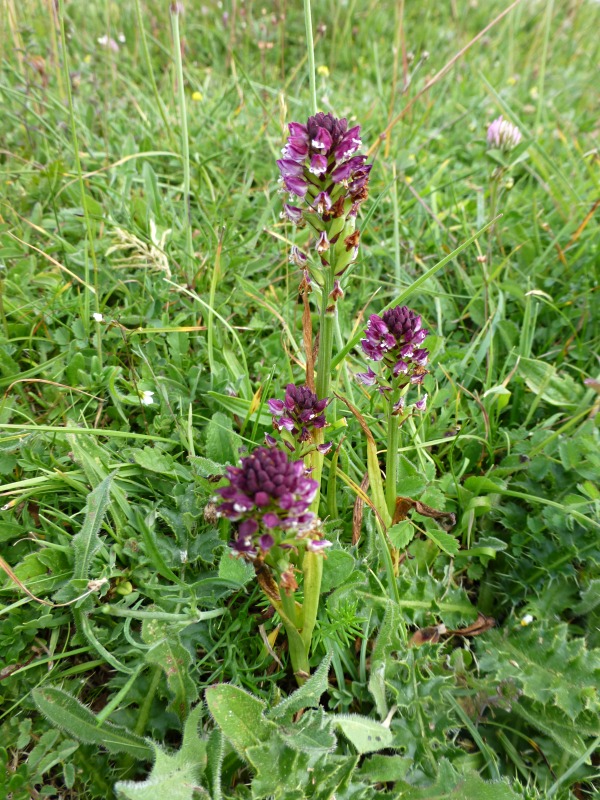 Flushed with success and now with my eye in I worked my way back along the original area that I'd been looking but still no luck -  I'd clearly just been in the wrong area to start with. I found one more clump of three or four a bit further around on the bend in the south east corner of the fort but that was it. By now I was tired and hot so I headed back to the car where I soon had the air conditioning cranked up to 11 to cool off as I headed back home. It had been a successful day out.

Thanks for your interesting blogs. I enjoy reading them