Early afternoon on Saturday news broke of an Eastern Olivaceous Warbler at Farlington Marshes down in Hampshire. Now, at only one and a half hours away this was well within my twitching distance but normally weekends are off limits due to family commitments. However on Sunday morning my VLW would be off playing tennis and with nothing else going on I decided that I would nip down on news first thing the next day. The bird was reported regularly throughout the whole of Saturday afternoon and so it was with some optimism that I went to bed, hoping for a "still present" message the next morning.


The birding gods saw fit to smile down on me and Sunday morning the bird was indeed still present so just after 8 am and with the rest of the family still asleep I was on the road and heading down the pleasantly empty A34 towards the coast. There was more traffic on the M27 heading eastwards and road work speed restrictions all along there made for frustrating progress but eventually I hit the A27 and then immediately turned off for Farlington. I'd visited here just once before way back when I'd just started birding. Indeed I think I'm right in saying that I saw my first even Bearded Tit here so it was nice to be back again. The target bird had been reported once during my journey down so it was with some optimism that I navigated my way through the overcrowded car park and hurriedly got tooled up. 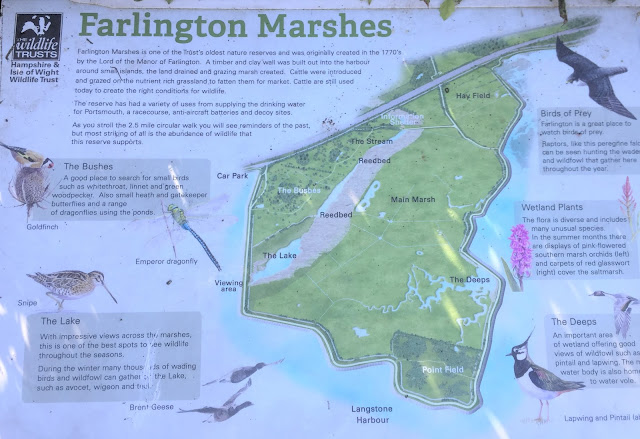 I only had the vaguest of ideas where to go but I could see a distant line of twitchers half way down the west sea wall by the Lake (see the map above) so off I yomped. I'd got no more than 40 yards or so when a birder coming the other direction but over on the other side of the ditch from me yelled out that the Warbler was actually in the opposite direction and he pointed towards the north east corner of the reserve. So I did an about turn and headed off eastwards from the car park towards roughly where it says "The Stream" on the map. Here I can across a gathering of no more than about 30 twitchers loosely spread out and looking towards a clump of bushes. My initial enquiry found that it had been seen in the last few minutes in a sort of hollow area in the centre of the bushes. After adjusting my position better to see in this area someone next to me said "it's showing now" and sure enough I immediately got my scope on it to get what turned out to be my best views of the morning of the star bird. It was feeding low down on some bramble but this particularly patch was rather empty, thereby giving better views of a large Hippolais Warbler (actually an Iduna), a pale grey brown above and off white below with a distinctive long bill, a reasonable supercilum before the eye and a slightly peaked crown. What's more it was pumping its tail regularly, which in itself is the most diagnostic feature that separates it from its confusion species of Skye's, Isabelline (formerly Western Olivaceoous) and Booted Warblers. It seemed to move more rapidly than the ponderous jizz of its Melodius and Icterine cousins and after a minute or so it was gone.


After that it was a question of hanging around waiting to see where it would show again next. Sometimes it flew over our heads into another clump of bushes behind us. Then all the twitchers would gather around waiting for it to show. It could occasionally be heard "tack"ing away hidden from view. Showings were usually rather brief affairs, often at the top of the bushes. It was constantly on the move and so it was very hard to take any decent photos with my superzoom camera which is all too slow compared to a proper one for situations like this. Still I managed three shots which actually had the bird in. 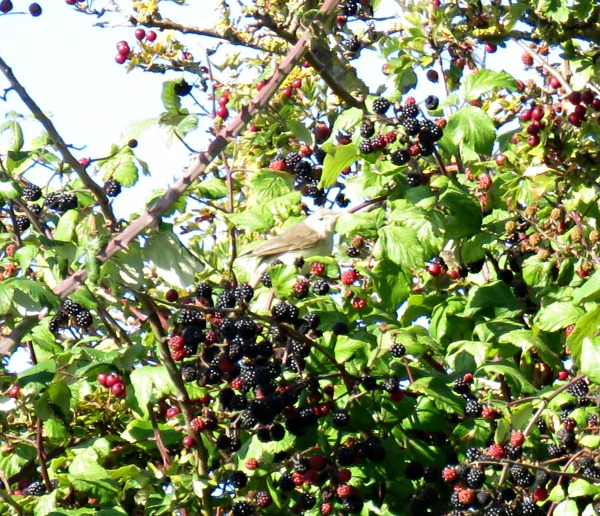 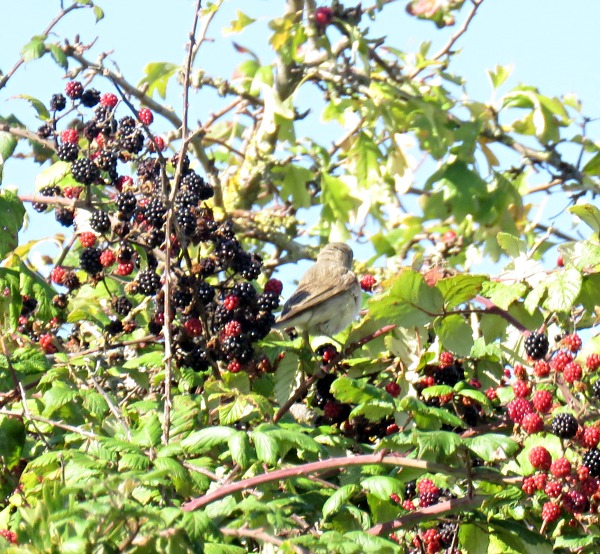 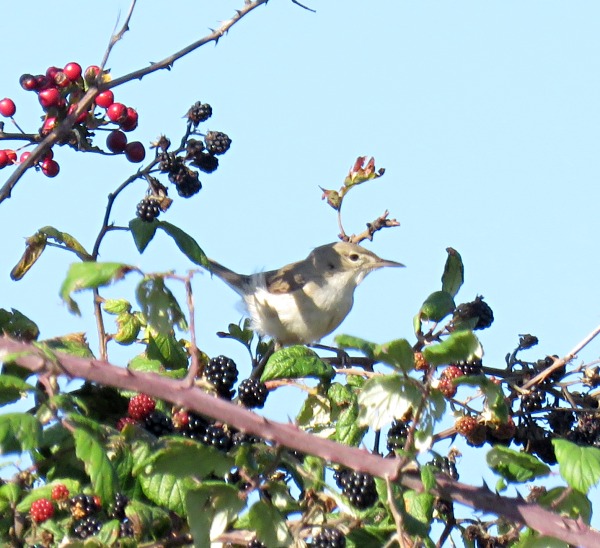 TM (a student birder who works my Port Meadow patch with me) turned up at the twitch as well. Indeed I was somewhat surprised I hadn't seen any other county birders - I would have thought that to have such a rarity relatively close to the county would have tempted quite a few others. After a while of inactivity I wandered over to another clump of bushes where a much smaller group were staking out a hidden Wryneck though on enquiry it turned out that it had not been seen in quite a while so I headed back to the main event.

Time marched on and after a while the bird flew over to a different area where it was much further away and much harder to view. With one eye on the clock this seemed like a good opportunity to head off home so I wandered back to the car in a contented frame of mind. I'd managed to put a genuine national Mega on my list, indeed after such a long dry spell this was my third lifer in 8 days. The journey back was uneventful and I arrived back at Casa Gnome at about 1pm in time for lunch.


As a post script, the next day the bird was much more elusive and indeed PL struggled for much of the day before getting a decent view (see write-up here). I was therefore very lucky that I went when I did.
Posted by Adam Hartley (Gnome) at 12:01