The Durham Run: Beating the Lockdown

As documented last month, our eldest daughter came back for Christmas (Nosterfield Lesser Yellowlegs and Snow Bunting in terms of birds seen). At the start of the new year and with Lockdown 3.0 looming on the horizon we decided that we would head back early in order to beat the Lockdown deadline. So it was that on New Year's Day we set off at around 9 a.m. to head back northwards. The roads were wonderfully empty, so much so that I trounced my previous record time for the journey - if only it was always like that!

After unloading all my daughter's stuff and grabbing some lunch and a cup of tea I found myself with an afternoon's birding ahead of me in the North East. As usual I had done my reasearch on what was about but at this time of year it was slim pickings so in the end I opted for the long staying Northern Eider (S. m. borealis) that was overwintering at Redcar. This subspecies was not one that I knew anything about or indeed even had heard of previously but it kept flashing up on my RBA app as something that I had not seen before and this had nudged me into learning more about them. It turns out that the drakes can fairly easily be distinguished from our more usual Common Eiders by a combination of a more colourful bill that was orangey rather than the "mucus green" that Common Eider typically have and more easily by the two mini "sails" that they have on their backs - see this article for more details. That seemed like a reasonable target bird to aim for, a sub-species tick no less and it would also give me an opportunity to bird the south side of the Tees estuary, somewhere I'd not hitherto visited. So it was that I set off on the three quarters of an hour journey from Durham before arriving at Redcar beach and parking up near the bandstand landmark that was often referenced in reports of the target bird.

On arrival, I found that in contrast to inland, the weather on the coast was blowing a gale and freezing cold. I donned all my outdoor gear and battled through the winds to the bandstand area. I found a sheltered spot near the bandstand where I could set up my scope without it being shaken about too much and started to scan. This afternoon the tide was in and that and the extreme wind meant that conditions were very choppy. I found the Eider flock but such was the chop that birds were on view for fractions of a second at a time before disappearing in the troughs for many seconds. This meant that picking out details like subtle bill colour or little back sails was really difficult. From where I was the birds were rather distant so I moved to another spot where I could shelter from the wind on the steps leading down from the road to the beach. Here I did my best to work through the fifty or so Eider that were spread along the shore in two or three flocks. I would sometimes get tricked into thinking I had the bird when a gust of wind would ruffle up the back feathers of one of the drakes a little - it was all most frustrating. A close-in Red-throated Diver was scant compensation for this frustrating search. After a good hour and a half of struggling like this I reckon that I'd definitely seen the bird at least once though it was a long way from a satisfactory view. As it started to get dark the flock disappeared from close in shore, presumably moving further out to roost, and I had to give up.

With a bit of light still left I chose to drive a few miles north from Redcar to South Gare, the area on the south shore of the mouth of the River Tees. This was an interesting combination of industrial wasteland, bordered by a giant chemical works to one side, with sandy dunes to the south and a small harbour and a few outbuildings along the road leading up to the breakwater. There I parked up and had a well deserved cup of tea, watching the sun set over the chemical works on the north shore (romantic or what!?). 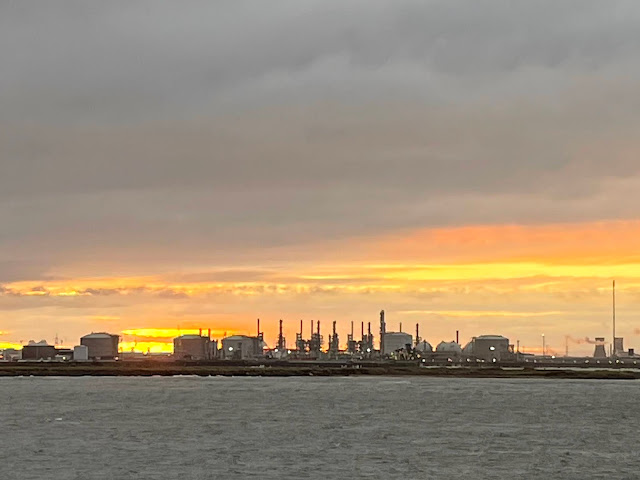 Then it was time to head back to Durham to spend the evening with my daughter in her student house. We'd deliberately chosen to come up so early as there wouldn't be any of her house mates back yet so we had the place to ourselves with no Covid concerns to worry about. We ordered a takeaway to be delivered and settled in for an evening of Netflix before turning in for the night.

With nothing else having turned up, my plan for the next day was to head back to Redcar to see if I could get better views of the Northern Eider. Aware that I had a long journey south back home still ahead of me I decided to head off early the next day. I awoke before daylight to find that it was snowing in Durham so after a hasty breakfast I fired up the Gnome mobile and set off in the darkness for Redcar once more. The snow soon stopped and with a much calmer forecast for the day I was looking forward to getting some better views of the Northern Eider. However, I was about a quarter of an hour into my trip when it started to snow again, this time much more heavily and thickly and suddenly driving conditions becamse much more treacherous. There was no going in the outside lane on dual carriage ways which was virgin snow, you had to stick to the inside lane where other cars had already driven. As I got to the Middlesborough ring road the snow was falling thick and fast and I started to see one or two cars broken down on the side of the road. I was just coming off a slip road which sloped down and to the left when I found myself skidding briefly on the bend. Fortunately the ABS kicked in and I was able to regain control. The worst that would have happened would have been I'd bumped into the side barrier but it was a scary moment. A few minutes later, approaching a roadabout (thankfully deserted) once again I skidded briefly as I tried to slow down. Again it was only a matter of a few moments and there was no danger in this instance but it was a surreal feeling of helplessness feeling the car slide with no control over it.

Thankfully there were no further incidents and by the time I reached the parking area at Redcar it had stopped snowing. Mercifully there was no wind to speak of and it was with some keen anticipation that I got tooled up and headed out to look for the Eider flock once more. A few early morning Turnstone were foraging on the beach before it got too crowded as I headed towards the bandstand area. I found the Eider flock easily enough and with the tide out and no wind the chop was much more manageble. Because of this it was only a matter of a few minutes before I found the Northern Eider, which was easy to pick out in the better conditions. I found that I was able to get reasonable close to the flock which was feeding just off shore and so had a go with my Superzoom camera to take some shots 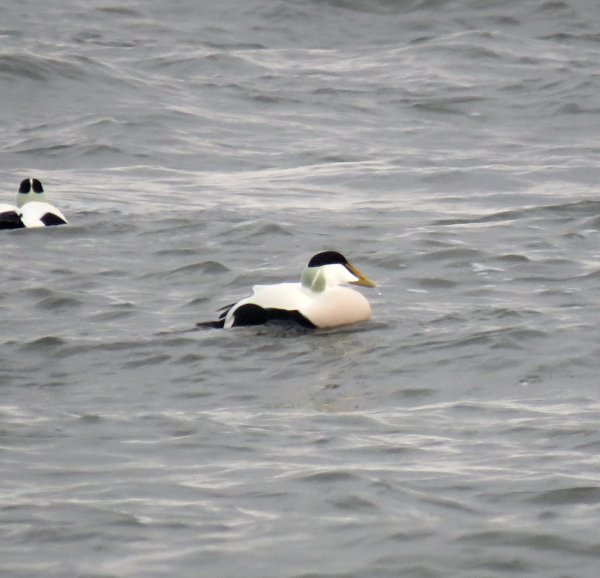 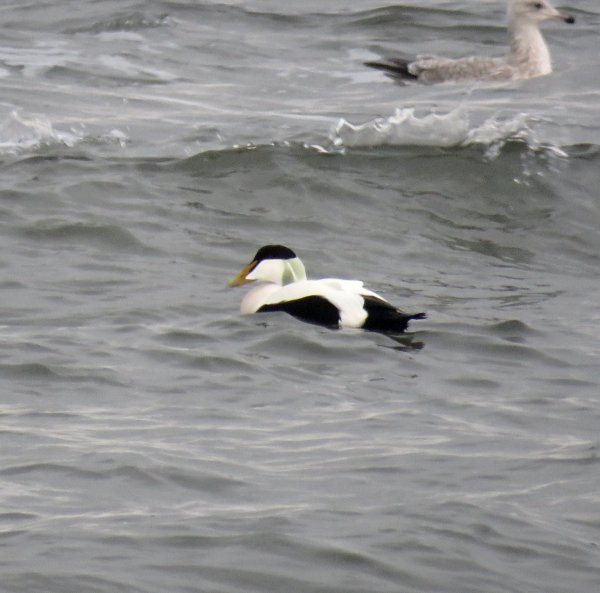 Northern Eider is one of four subspecies and encompasses the birds found in the Arctic regions of the North Atlantic from North East Canada through to Greenland, Iceland and Svalbard. Livezey (1995) suggests that the Common Eider subspecies group should actually be promoted to four separate species: Pacific Eider (S. v-nigrum ), Northern Eider (S. borealis), Canada/American Eider (S. dresseri) and European Eider (S. mollissima). Naturally I would more than happily accept an armchair tick should this happen though in the meantime I will have to settle for a subspecies (and "insurance") tick.

I passed a pleasant hour or so admiring the Northern Eider before deciding that it was time to move on. With nothing else to do I opted to head back to South Gare to see if I could find much of interest. I was just driving along the approach road when I came across a couple of birders walking the opposite way so I wound down the window and enquired as to what might be about. They filled me in, reporting a couple of divers in the estuary and some mobile Snow Buntings along the beach. Armed with this info I parked up and went out to see what I could find.

The two divers were easy enough to pick out: a Great Northern further out and a Red-throated quite close in.

There were quite a few Reed Buntings loitering in the bushes near where I parked and flying back and forth to the dunes. 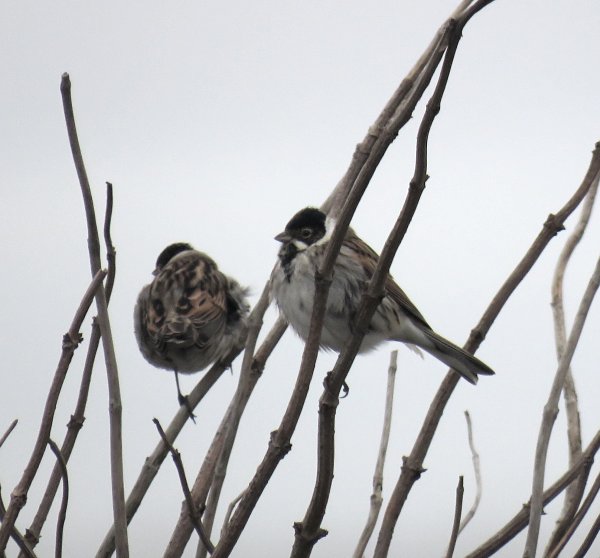 After a while of exploring the headland I decided to walk along the beach to see if I could find the Snow Bunting flock. I ended up walking quite some distance though never managed to find them but the scenery was pleasant enough and with the long journey home in mind I was pleased to get in some pre-emptive exercise.

There was nothing more of note to be seen as I retraced my steps back to the car. There I had a snack and some tea before girding my loins for the journey back. The roads were rather snow-covered to start with at least and it was slow going sticking to the nearside lane behind the lumbering lorries. As I continued south the snow gradually disappeared and the rest of the journey home was uneventful. I arrived back mid afternoon for my usual celebratory cup of tea and a catch-up with the rest of the family. It had been a surprisingly enjoyable trip up to the North East.