It's weird - last year my birding trips were few in number and modest in target but this year here I am posting about my second national sortie within a week. After my epic DIY trip down to Cornwall during the week this was a much more straight-forward affair. My attention had been caught be the long-staying White-throated Sparrow at Barcombe in Sussex. This had been around for a couple of months at least but initially the location was heavily suppressed. Gradually news has been leaking out but for a while it went quiet and we all assumed that it was gone. However on Thursday evening it was reported as still being around "recently" which must have prompted someone to go and check it out the next day. With news breaking of it still being present on Friday I decided that I would see if I could go and see it over the weekend. In the end I was too tired on Saturday after a long week so I opted for a Sunday trip.

As my journey there would take me right past my VLW's brother's place in Surrey we arranged for me to drop her off there. All her siblings were going to be there as sadly her eldest brother is very unwell so it would be a good opportunity for her to catch up with the rest of her family. This did mean that we left later than I otherwise would have done had I been flying solo and what with the detour to drop my VLW off it wasn't until midday that I finally arrived at Barcombe. Fortunately I was able to grab the last parking space in the small car park next to the recreation ground and I was soon tooled up and hurrying over to the twitch area. From reading on the internet, the bird had been giving visitors quite the run-around in previous days and was by no means guaranteed but I arrived to find that a picnic table on a small bit of decking had been well seeded up and all the twitchers were standing around it, at a reasonable distance, waiting for the bird to turn up. It all seemed very relaxed and civilised!

I asked someone how frequently the bird was showing and the answer seemed to be every 40 minutes or so. I was also told that it would not linger long on the table, perhaps a minute at most so I got my superzoom camera all primed up and ready in preparation.
Time passed, I nibbled on my packed lunch and drank my tea. There were other birds to watch with several flycatching Chiffies about, a singing Nuthatch and various miscellaneous fly-overs. It was probably a little more than 40 minutes after my arrival when someone called the bird out, sitting to the right of the decking area in a small tree. I managed to see it clearly enough for a couple of seconds before it flew off. Having now actually seen my target I felt more relaxed and I went back to waiting for better views.
A little while later I heard it singing for the first time, a thin clear whistly song. Sometime after that and it was back on the decking though again only for a matter of seconds. So now I had seen it twice but still had no photos. I waiting some more and finally it landed on the table and fed for about a minute. I papped away as best I could with my superzoom and managed to capture some reasonable record shots of this lovely looking bird. 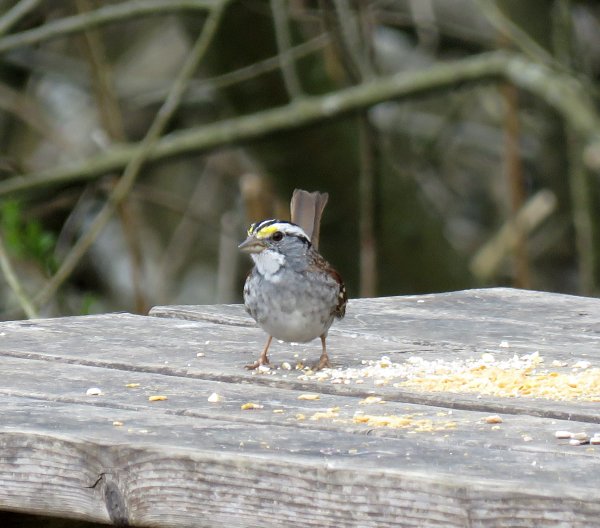 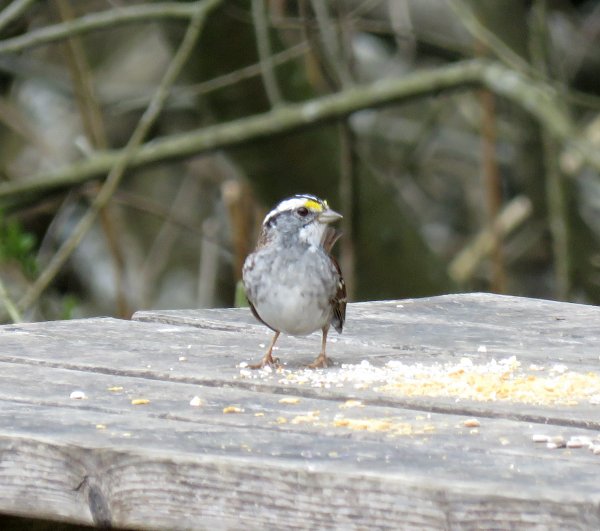 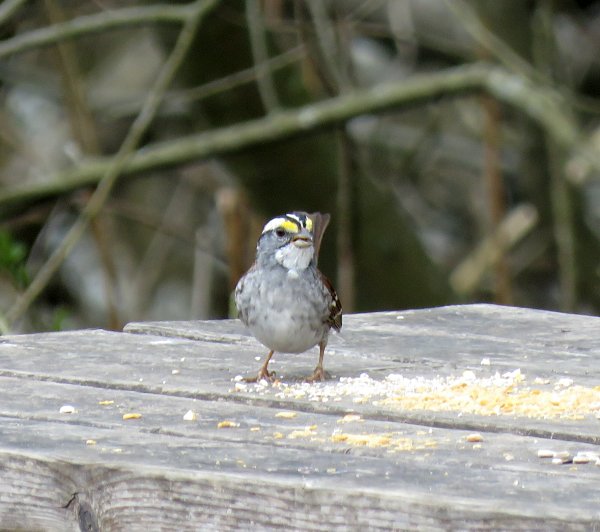 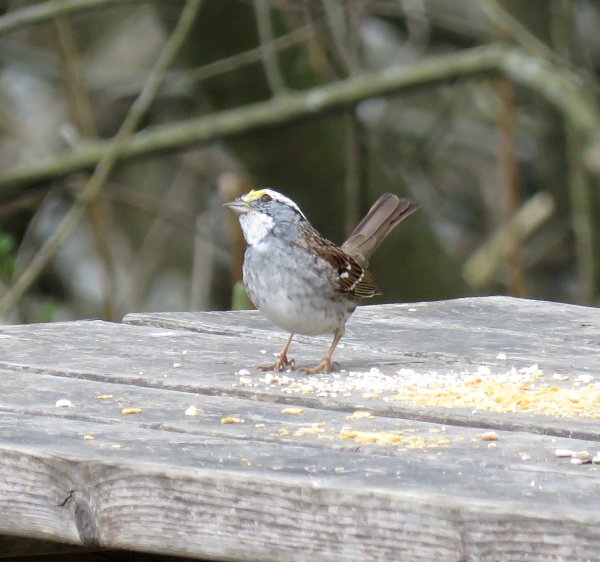 All too quickly it was off again and that was the last time I saw it. It did have an extended singing session deep in the copse, though not in any way viewable. I hung about as long as I could in case it showed again but it was not to be.

Conscious of the time and that I had to go and pick up my VLW on the way back, at around 2:30pm I was back in the Gnome mobile and heading back to Surrey and my brother-in-law's place. There I had a reviving cup of tea and a chance to catch up with the rest of my VLW's family. Then it was back on the road and back to Casa Gnome. It had been a nice straight-forward twitch, with my third Nearctic lifer within a week.