Any birder with their ear even remotely near to the twitching ground will be very aware of the ongoing presence of a Belted Kingfisher up in Lancashire for the last couple of months. With only four previous records in this country, this large American Kingfisher was a proper Mega rarity that was always going to attract a large amount of interest. It was initially found by an angler on 8th November on the River Ribble east of Preston though as there was no subsequent sign of it, the veracity of the report was initially questioned. However, on the 14th it was seen again though after that sighting it seemed to vanish. On the 25th November it was seen once more at the bottom of a treachorous and steep slope below Red Scar crematorium and so began a frenzy of twitching attempts by twitchers keen to add it to their list. By all accounts it was an uncertain venture: not only was the bird highly unpredictable as to when it might be seen but navigating the slope down to the river bank was a very hazardous matter with emergency services having to be called on at least one occasion to rescue people who had injured themselves falling down what became known as the Slope of Death. I personally knew of at least two birders who had dipped multiple times trying to see the bird at this location. For me to consider any kind of longer distance twich the odds need to be firmly in my favour and the low success rate, not to mention the risk to life and limb meant that I was not even comtemplating an attempt.

It was last seen on 30th November before a series of days of "no sign" showed that it had moved on. However, on the 9th December it was "reported" at Roach Bridge on the River Darwen and then on the 17th it spent a day on the Leeds and Liverpool Canal. In both cases these seemed to be one day reports only. Then on the 20th it was seen again at Roach Bridge and on each day following that. Arrangements started to be made about parking and the farmer whose field it was started charging a £10 entrance fee. With it finally being nailed down I started to keep a closer eye on proceedings though there was the small matter of Christmas to negotiate so it wasn't until our guests had left that I started to consider this as an actual potential sortie. It seemed that being there at first light (which fortunately isn't that early at this time of year) was the best tactic but as it was at least 3 hours from Oxford I decided that an overnighter at a nearby Air BnB would be the best tactic. And so it was that on the 29th I set off just before 4pm up the M6 for Preston, stopping in briefly at Port Meadow en route to see the Red-breasted Geese that had relocated from Otmoor to my patch. The journey northwards was uneventful though somewhat marred by news that the Belted Kingfisher had relocated back to the Leeds and Liverpool Canal that afternoon before flying off north at dusk. I mulled this over as I drove: could it have moved? It could well be that it roosted at Roach Bridge as it had been seen every day since the 20th at least in the morning but in the afternoon liked to wander further afield. I concluded that I would stick with my plan of heading to Roach Bridge at first light and then see how things unfolded. I arrived at my Air BnB after an uneventful journey and settled in for the night with a picnic supper in my room. At only £29 for the night and only 10 minutes from Roach Bridge it was pretty much an ideal location for me and I settled in for the night.

The next morning I was up and out the door before my host was even up. I arrived at Roach Bridge at around 7:30 a.m. at the same time as several other birders' cars. Fortunately there was some safe parking right on site which saved me the walk along the road in the dark (not to mention the £10 parking fee) of the official parking site. It was weird tooling up and trudging off in the dark with other  birders - a strange congregation of anonymous shadows all with one aim in mind. The footpath was indeed the slurry of mud that everyone had mentioned and I was worried about losing my footing though it was actually relatively easy to negotiate. At the top of the path we were met by the farmer collecting his £10 fee for access to the field. We then had to slog our way across the boggy field in the dark - I got so hot doing this with all my gear on that I wondered if I was going to pass out! Finally I made it to the viewing spot and picked a spot where I could look down over the steep escarpment along the length of the river.

Slowly dawn broke and we started to peer along the length of the river for any signs of our target bird. There were a couple of false alarms where first a Jay and then a Crow got people over excited before reality prevailed. Then just before 9 a.m. we all heard the distinct rattling call of the Belted Kingfisher - at least it was still about! A few minutes later it called again and then some people saw it in flight. I'd discovered in the light that my chosen viewing spot wasn't the best vantage point as there were several trees obscuring the view so whilst some people around me had brieft flight views of a couple of seconds before a Crow chased it off, I myself didn't see it at all. It has been seen in a clump of Alders on the left-hand bank of the river so further away than the nearby Willow on the right-hand bank that was its favoured perch. After having been chased off it had flown off upstream out of sight.

Time passed and I started to wonder if I was going to have to put this down as "heard only". I only have one other bird on my national list as "heard only", that being the last tickable Lady Amhurst's Pheasant which I'd never actually seen but had heard making its distintive call. There was nothing I could do now but sit it out and hope that the bird would return. After the initial sighting and the news going out, the birders who'd opted to start at the canal instead started to turn up so our numbers swelled. We all stood around, eyes trained on the two trees along the river but there was nothing to see. I started to wonder if the whole trip had been worth it if this was all I was going to get. Twitching can be a cruel game!

Suddenly at around 10:30 a.m.I was awoken from my circling thoughts of heard-only dippage when someone yelled out that he had it, right in the far distance. The usual pandemonium of trying to get everyone on it ensued but fortunately he came round and started to put people's scopes on the bird including mine. I peered through my duly aimed optics and at first I could only see the distant far river bank but as my eyes tuned it I spotted a small blue-grey blob sitting low on a branch. There it was - the Belted Kingfisher!

To start with I helped to get other people on the bird, even offering views through my scope but as the bird was very cooperative and just sat there eventually everyone managed to train their scopes on it and I could get on with taking some video footage. It was some 500m away (I measured it on Google maps) so any photography was always going to be record shot only but given stories of how hard this bird had been to connect with I was happy just to be seeing it. After about 10 minutes of watching it, it flew off.

Some video footage of the Belted Kingfisher

It was a much more relaxed atmosphere in the twitching ranks now that the bird had shown though more stragglers were still arriving who had yet to see it. I got chatting with a couple of birders next to me who knew me from Cornwall - it's a small world! At some time after 11a.m. it reappeared along this same far section where it stayed for more than half an hour, occasionally moving a few yards along the river. Whilst the views were very distant they were at least prolonged and we all watched this Mega with contentment.

Finally about about 11:45 a.m. it flew off again and I felt that I'd had enough. I slogged my way through the boggy field back to the car though, wrapped in my warm glow of success, I didn't mind the exertion. Back at the car I had a quick picnic lunch before heading the short distance to the M6 and southwards towards home. The journey back was uneventful and I arrived back in time for my customary celebratory tea in the bosom of my family. It had been a great end of year finale!

To help people who might still be contemplating a trip to see this bird, below is a map showing the key locations. The green line is the end of the muddy field where you view from. The red circle is the fallen Willow on the right-hand side, where the best photos come from. The yellow circle is the clump of Alders where it was first seen this morning. The two yellow lines are the distant views that I had today - this is about 500m from the viewing point. The red line is the fishing lake where it can also be seen. Going first thing seems to be the best tactic and wellingtons are essential. 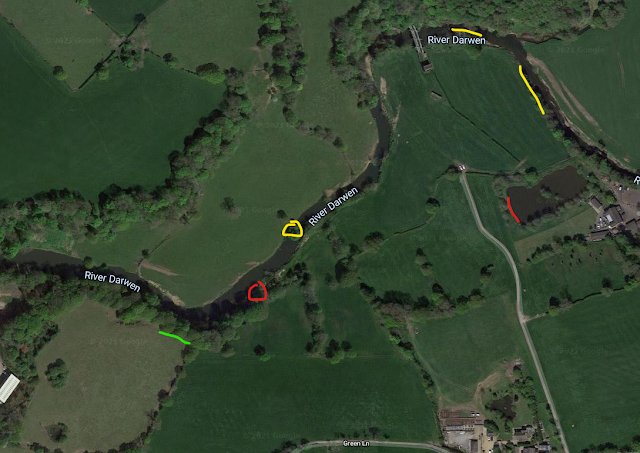