The summer months are a time when there is usually a lull in birding and, like many others, I tend to turn my attention to flowers and insects instead. I've been keeping it fairly low key so far, just visiting the Trap Grounds to look at the Odonata activity there and so far have not paid any visits away from my local patch. This all changed last week when a Scarce Chaser dragonfly was found on the river Thames at Shillingford on Tuesday by a local Odo enthusiast, JB, who regularly patrols this stretch of the river. Now Scarce Chasers are rather a localised species nationally with their main areas being either East Anglia or around the Bournemouth area. Indeed there have only previously been two or three records for the county so this was kind of a big deal in the Oxon Odo world. This would make a nice little trip out though I wasn't free the next day when it was seen again. However on Thursday morning, on what was forecast to be the hottest day of the year so far, it was reported as still present as I was just setting off to take a look for myself.

By the time I had parked up by the Shillingford hotel and run the hay fever gauntlet of the mass of uncut grass in full flower all along the river bank path, a second male had been reported in the same general area. I arrived to find three other enthusiasts who had been watching the original Chaser for quite some time. Sadly, in typical fashion, it had just flown off before I arrived! I needn't have worried though because a few minutes later it turned up again, perching on the top of a reed stem and I was able to get my first view.

Scarce Chasers are rather an obliging species in that they like to spend a lot of time perched on the top of a reed stem waiting for something to pass by, quite unlike the Emperor that was patrolling the bank in the same general area that spent almost the entire time on the wing up and down the same stretch of the river. The Scarce Chaser would go missing for periods of time, presumably sitting somewhere out of sight, before turning up again in one of the fishing bays that are regular features along the river here.

Apart from the Scarce Chaser there was a mature Club-tailed Dragonfly knocking around that I got some brief views of, the aforementioned Emperor, a Four-spotted Chaser and the usual plethora of Banded Demoiselles. On the Damselfly front there were a few Red-eyed Damselflies on the river and some White-legged Damselflies in the bankside vegetation. This latter species was of particular interest because I'd only previously ever seen it once, in a colony up near Banbury a few years back. Whilst this species is regularly sighted along the river Thames in various places in the county, it usually only occurs in small numbers and a certain amount of effort is generally required to see them. However, by standing around waiting for the Scarce Chaser to re-appear I had the time to observe the local Damsels and eventually managed to pick out a few White-legged as they went about their business.

After a period of time the Scarce Chaser reappeared, this time perched up on a much more convenient perch and at last I was able to get some reasonable photos. 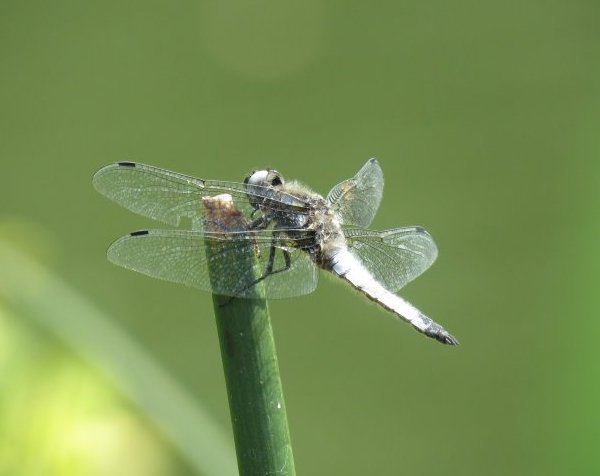 I was just watching it and enjoying it in the company of IL when the second male re-appeared and the two clashed violently. They soared vertically upwards in the air as they did battle until they disappeared from view. IL chose to leave at that point but I hung around for another half an hour without seeing either of them again. Eventually I had to concede that they weren't coming back in a hurry so I ambled back to the car, finding some more White-legged Damselflies on the way.