As I'd intimated a couple of posts ago (the clue is in the title "Waiting for Something Good") I was getting rather twitchy and there seemed to be good birds turning up everywhere apart from Oxon (except on days when I'm out of the county of course!). I'd also been rather disappointed at the elusiveness of the Marsh Baldon hoopoe so when one seemed to be lingering for some time at Clayhanger Marsh in the West Midlands I started to take note. I wasn't going to be free to venture forth until Tuesday so it was a matter of hoping that it was going to stay for a few more days but fortunately each day it was reported once again so on Tuesday morning, after dealing with a minor domestic crisis (unblocking a toilet!) I set off north just after 9am. I'd done my homework in advance, looking on Google maps so that I knew the layout of the area before hand as well as the route to take and fortunately Clayhanger Marsh was just of the T6 junction on the M6 Toll Road and would take a little over an hour to get to once out of Oxford. Sure enough shortly after 10 I parked in a convenient layby and headed towards the area the bird was known to frequent. It had been reported as being near the slag heap by the disused railway which could be seen from the Google Map images so I knew where to go. As I went I heard sedge warblers warbling away in the reed beds by a nearby pond. I got to the slag heap and started to look around: the general terrain was quite short grass with scattered hawthorn bushes and occasional clumps of gorse. There were also scattered ponds and in the distance was a larger lake. As I scanned I soon spotted a small group of birders in the distance who all seemed to be looking at something intently. Accordingly I quickly made my way over towards them. As I got closer I could see they were looking towards some gorse bushes towards which one person was creeping and there a short distance ahead of him was the hoopoe. This creeping person clearly had no consideration for the other birders who were considerately keeping their distance back on the path. Instead he beckoned to his wife who came up too and they got excellent views for about a minute before of course the bird flew away into a tree behind them and was then lost from sight. I must say that everyone was remarkably polite towards the two flushers who soon went off without any comment.

There were a couple of serious photographers there with monster lenses who decided that the thing to do was to go around to the other side of where the bird was last seen, a walk of some ten minutes, and I decided to tag along with them. As we made our way over there we saw an oystercatcher that feeding at one of the pools. We worked our way towards a copse of trees on the far side of the gorse and then started scanning and creeping slowly forwards. It wasn't long before the hoopoe was spotted again, back in the original place where it had been flushed. The three of us worked our way towards it using the gorse for cover and before long the bird worked its way into clear view about 20 yards away. We were all clicking away with our cameras like crazy though of course I was just digiscoping. The bird performed well for some five minutes before flying off towards the path and then over to the other side of the marsh. One couldn't really get better views than that and as I'd told my VLW that I'd be back for lunch I decided to head back for home. On my journey back to the car I noted several singing lesser whitethroats and a cuckoo . 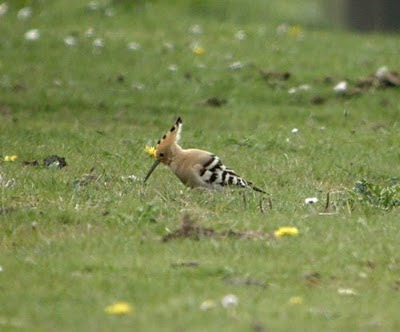 A distant approach shot of the bird... 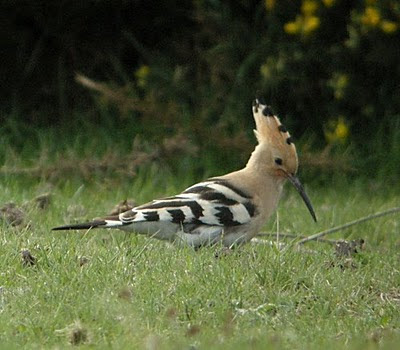 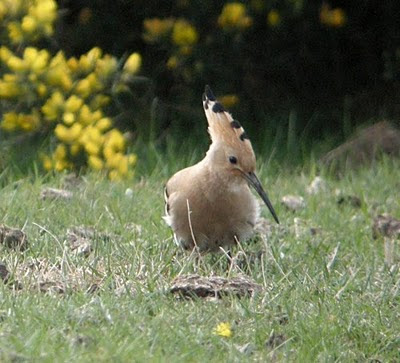 ...and a couple of close ups
One couldn't really get better views of a hoopoe and as this was my first one in this country (I'd seen them in South Africa as a boy) I was very pleased with my morning's work.

Want To Boost Your ClickBank Traffic And Commissions?