Sometimes one has to be opportunistic when it comes to seeing birds, especially when one has family obligations and can't just go and see something on a whim. I've had a college friend visiting for the last couple of days. It was great to catch up on what he's been up to even if it meant that I wasn't able to get out to see the Temminck's stint at Farmoor on Thursday evening. However when he mentioned that he was going on to Leicester next to visit his mother I remembered that this wasn't too far from Derbyshire where a great reed warbler had been in residence at Straw Bridge's NR, Ilkeston for at least a week now. As this bird fell into the category of well entrenched high probability twitches, I therefore suggested that I gave him a lift up there and since I was in the neighbourhood I could go on to the bird afterwards. This plan was acceptable to all and so it was that on Saturday morning at around 10:30 a.m. we were heading north along the motorway (having already done my weekly shopping chore first thing in the morning so as to get it out the way). It was a good chance to catch up some more with my friend and the journey there passed quickly and pleasantly. Having dropped him off it was only some half an hour or so on to Ilkeston.

Straw's Bridges NR was a rather unlikely venue: consisting of a couple of ponds with no reeds on the first one and only a rather small clump on the second pond, nevertheless this vagrant bird had chosen this tiny reeded area to set up shop. When I arrived there were perhaps a dozen birders lined up who informed me that the bird had been seen really well about twenty minutes ago. It was singing on and off the whole time so I got down to the task that seems to be quite common when twitching: staring intently at some vegetation of some kind, waiting for something to show. Reeds are probably the worse kind of vegetation to stare at because you can often fancy that you can see something deep within the reeds. Indeed periodically some of the birders next to me who had been there for a while and had already seen the bird, would claim that they could see something moving in the reeds. I don't know whether they really could: perhaps they'd agreed in advance to say this and to back each other up in order to wind up the other birders. Anyway, this staring went on for some three quarters of an hour, just long enough for me to start to wonder whether I was going to have to settle for a "heard only" tick when suddenly it popped out and showed clearly as it perched in the upper reeds singing loudly. I wasted no time and as soon as I'd found it in the scope, rattled off digiscoping shots as fast as I could before it disappeared again after about a minute. 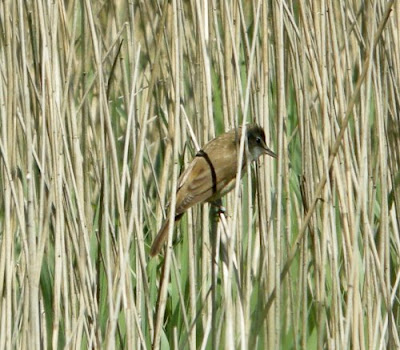 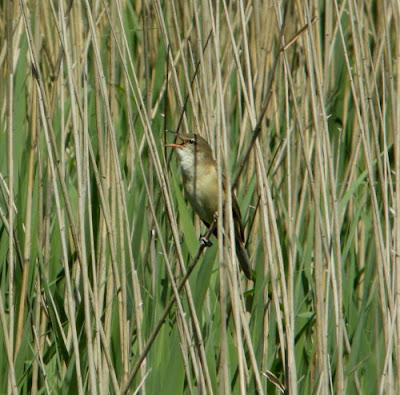 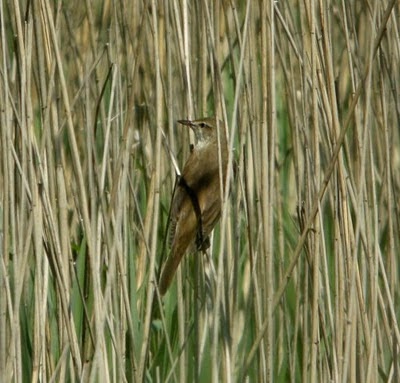 The great reed warbler
I wondered whether to leave at this point but felt I would like to get a better look so I waited for perhaps another twenty minutes before once more it showed and this time for longer, moving about to several visible locations. During this time I rattle off some more shots and also took a chance to have a good look at the bird. Not having seen one before I was amazed at just how huge it was: perhaps song thrush size with quite a chunky bill. I'd read that the song was a "scratchy reed warbler" but I don't think that this does it justice as it was surprisingly rich in tone with a great deal of repetition. It was also remarkably loud with none of the monotonous muttering of a reed warbler. I recorded some video of the reed bed so as to pick up a bit of the song.


Ignore the video and just listen to the song


After this second, more prolonged showing I felt that I should get back and duly headed for home.

I seem to be in a bit of a twitchy vein just at present, what with the Clayhanger Marshes hoopoe, the Frampton pratincole and now the great reed warbler. I must admit that I'm enjoying getting out and about seeing different birds though I still don't really consider myself to be a proper twitcher (I'm obviously just in denial!). It's partly that my life list is so low and I'd like to get it to a more respectable level though I'm still a dedicated patch worker as well. Anyway another tick to add to the national year list. The county list on the other hand is going nowhere fast and I seem to be missing all the decent county birds as they come through: as well as the Temminck's on Friday a pair turned up at Otmoor whilst I was up at Ilkeston as well as several flocks of black terns in the county so these species can be added to the growing list of stuff I've not seen in the county this year. Not that it matters of course but I am wondering whether to continue with the county list tally. We'll see.