As promised, this is when I get to bore you with my holiday snaps! Indeed there are so many of them that I'm going to have to split it up into different parts, so this is just part one. You have been warned!

Introduction
I've been thinking about this report and I'm not quite sure how to pitch it. The fact is that any birders with experience of birding Stateside are going to find my sightings laughable: I realise that I've basically managed to see a few of the commonest birds in the States and to take some rather rubbish photos of some of them. It would be the equivalent in the UK of reporting how one day I saw a blue tit and the next day a magpie and here's a blurry photo . Nevertheless, I've found it most educational learning about the differences and similarities between US and British birds and whilst my sightings are commonplace I've certainly enjoyed getting to grips with all the identification issues so I'm going to pitch this at the level of someone with only limited American birding experience in the hope that they find it at least a little educational.

This was a family holiday in the form of a road trip: starting out at Denver where we have friends we were to head north to Yellowstone NP, spend a couple of days there then head south via Salt Lake City down to Bryce and Zion Canyons and the Grand Canyon, then west to Lake Powell, west to Moab (visiting Arches and Canyonlands NP's) and then west back to Denver. I wasn't bringing my scope so just had bins, my point & shoot camera, the Sibley Field Guide to Birds of Western North America and the Audubon Birds iPhone app. We were going to be there for the last few days in July through to mid August which is not a great time to be birding inland: you've got lots of difficult juvenile birds without the benefit of getting to see any passage waders. In hindsight I discovered that the Sibley Western NA guide (there's an Eastern one as well) omitted many of the juvenile plumages in order to save space which was rather annoying and perhaps I should have gone for the full pan-American version instead. I did have one other resource at my disposal in the form of access to the Birdforum Bird Identification thread. If I was stuck I would post a photo and in a very short time one would often have back the ID. This helped tremendously with some tricky problems.

Incidentally, I'm sure that I've got a few ID's wrong on this trip and if anyone spots any howlers either in the text or with the photos please let me know and I'll correct them.

Birding In and Around Denver
I was keen to see what my first American bird would be though in the event it was an American crow at Denver airport, shortly followed by a feral pigeon. We were staying in downtown Denver where there was not much birding to be had though I did discover that although there are several dozen tricky New World sparrows to get to grips with, all I could find was our very own house sparrow over there and thriving.

I was keen to see any form of bird life so I decided to get up early and go for a run to see what I could find. Incidentally Denver is known as the mile high city as its elevation is at least 6000 feet so running at this altitude left one somewhat breathless. I managed to find a park where I soon unearthed the ubiquitous American robin which is of course dead common over there. As I'm sure readers will already know it's actually quite a large thrush rather than a robin but apparently the first settlers were keen to name birds after things they knew back home in Britain hence the rubbish name. I also found a pair of nesting mourning doves which are like small collard doves with very long tails. 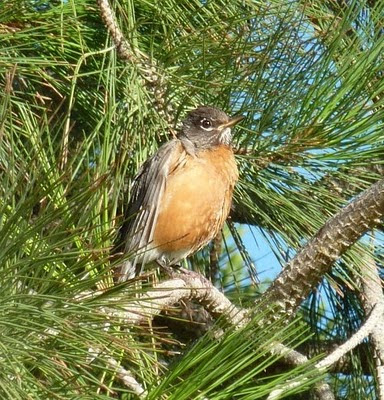 The American robin
I found a small patch of scrubby grass in which were feeding some house finches and a female American goldfinch. I was excited to see the house finch after all the hoohaa of the Prawle bird back in the UK but they are actually pretty common and I came across them everywhere. 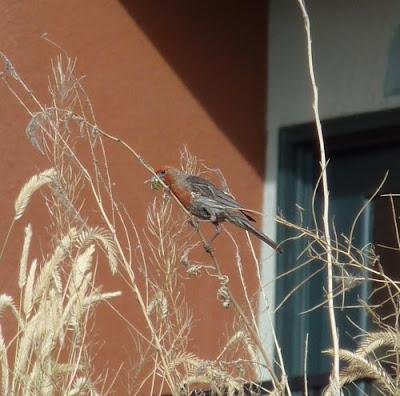 The male house finch has a red crown and breast; the female is just brown and streaky 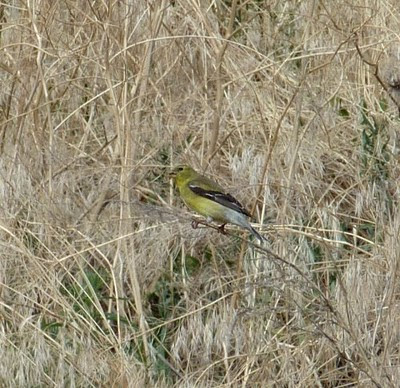 A female American Goldfinch
Further on on my run I came across a double-crested cormorant and a mallard and by a small river I found a common grackle rummaging about by the shoreline. These birds are similar to magpies or jays in their foraging habits but are all black with a long wedge-shaped tail and a thick bill. 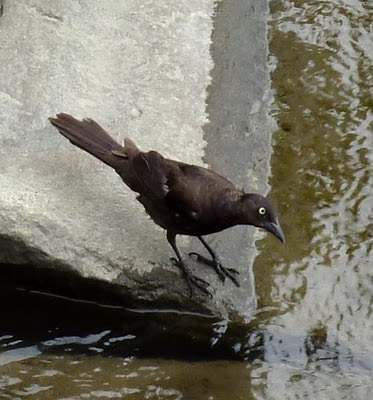 A common grackle
There was not much else to see in Denver itself though I did manage to see some swallows. In the US the only bird which is called a martin is the purple martin. Instead they have quite a few swallows some of which basically look very similar to house martins. I came across tree swallows and violet-green swallows on my travels: they differ in the extent to which the white under-tail covers wrap around to the top: tree swallows have a small white indent whereas the violet-green almost have a complete white rump and the males are an iridescent green colour. They also have our barn swallow zipping around all over the place. 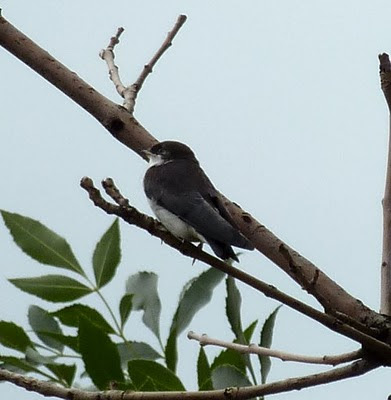 A tree swallow - basically looks like a house martin

I also added starling: a hundred of these birds were released in Central Park by a homesick settler and the population has now swollen to millions of them all across the country. (incidentally the same thing happened with house sparrows). Perhaps the most interesting bird was one I spotted on Denver Station roof. It was rather colourful and like nothing we get in the UK at all so I took some very distant photos and posted them to Birdforum where I quickly got back the reply that it was a western kingbird (a kind of large thick-billed flycatcher). By the end of the trip I was sufficiently au fait with US birds that I would have been able to identify it myself but it was nice to have a helping hand at the beginning.

The next day we went on a drive out to Mount Evans, part of the Rocky Mountains with a peak elevation of over 14,000 feet. Being America you can drive all the way up without getting out of the car if you want (apart from the last few feet). Near the top there was a fantastic lake with a glacier and perfect arctic tundra habitat. There were all sorts of amazing wild flowers and if you'd seen a photo of it you'd think you were in the tundra with small pools and short grass - I was expecting a phalarope to come swimming round the corner any minute! Apart from the plentiful ravens there were also quite a few American pipits (anthus rubescens - what we call a buff-bellied pipit in Britain) which breed in tundra habitat. You also get white-tailed ptarmingan up on Mount Evans though we didn't see any. Unfortunately the altitude got to my VLW who nearly fainted and had to be taken back down again whilst the rest of us drove up to the peak. However the weather had closed in by then and there was nothing but cloud and rain up there. 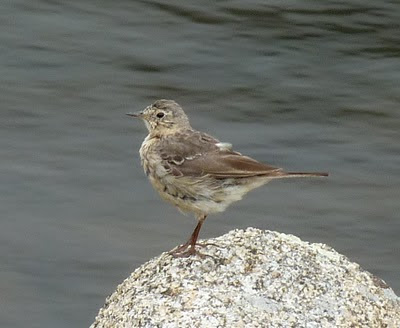 A juvenile American pipit (buff-bellied to you and me). There were quite a few colourful adults around as well. There are not actually many species of pipit in the US so identification is relatively easy.
On the journey back I was able to add black-billed magpie (not as common as over here though I saw plenty of them - they also have a yellow-billed variety in California) and red-tailed hawk. I found raptors to be a bit of a nightmare: the RT hawk is basically a buzzard which has the same bewildering array of plumage variations as ours do. Whilst driving along we'd see loads of buzzard-type birds and in the end I gave up and called them all red-tailed hawks. This is probably not too far off though I reckon that I must have missed quite a few more interesting ones in amongst them.

That about wraps up the first stage. The next leg of the journey was going to be an all-day drive north towards Yellowstone.
Posted by Adam Hartley (Gnome) at 19:55