Well, I'm back from my hols. We all had a very nice time in the USA and I've got lots of crappy bird photos to wade through before I bore you all rigid with my holiday snaps.

In the mean time I thought that I would do a quick county birding post. It appears that the really duff year in the county is continuing and despite being away for three weeks I've managed to dodge the grip-off bullet with the only bird of note whilst I was away being an adult Sabine's gull at Farmoor for just a few minutes which was only seen by the finder, Dai John. The morning of the day that I flew back in he also found a juvenile kittiwake which is a bit of a county bogey bird for me. When we landed at mid-day I got a text saying about it so I made enquiries and was told that it was still around at Farmoor. Feeling rather tired and jet-lagged, I felt that a walk in the wind and drizzle at Farmoor would be ideal to keep me awake so that evening I nipped up there with Farmoor expert Tom Wickens. I was anticipating having to trawl through distant gull flocks to find the bird but in the end Tom picked it out hovering in the wind a few metres above our heads at the east end of the causeway. On our return from a stroll along the causeway it was still there a few metres from the shore and I was able to take an acceptable shot with my point and shoot camera. Other birds of note were a couple of ruff and a ringed plover. It was good to be back in the grey weather and drab birds of the UK after the heat and brightly coloured birds of the USA! 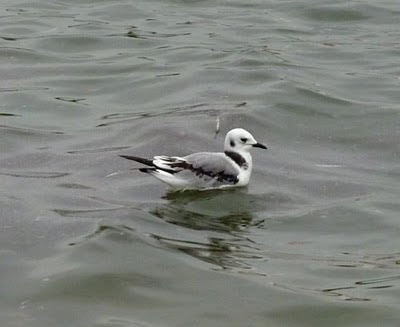 I've more or less given up on my Oxon year list which has never been more than an exercise in book keeping this year anyway but for the record: