I'd come back from the USA (I'm going to publish the account soon, honest) to find my patch, Port Meadow, still as dry as a bone and largely birdless. However this week we've had quite a bit of rain and on Wednesday I went out for a very late evening walk on the Meadow (it was actually basically dark) where I found it to be rather pleasantly boggy. It was also interesting to see what birds were roosting on the Meadow and I was amazed to find several hundred mallard all hanging out and feeding away in the twilight. It was sufficiently boggy for me to think of visiting the next day to see if I couldn't find at least something of interest. Low and behold the next morning the floods were back! I don't quite know how this happened as there'd not been much additional rain overnight but there quite a good amount of water, certainly sufficient to be attractive to a passing passage wader. I can only think that there is either some sort of draining affect whereby water from the surrounding land drains down to the low area where the floods are or alternatively there must be some sort of underground water movement whereby water runs along an underground level and then seeps up in certain areas. This latter theory is not as far fetched as it might sound: someone who knew what they were talking about was explaining it to me a while ago, how there is this subterranean water table which runs along the Meadow and how there is a layer of impermeable rock which holds the water in its place or something. Anyway, I wasn't complaining and immediately decided to switch back into "check the Meadow every day" mode.

The next day (Friday) I'd mentally decided to head out late there afternoon but a text from Bird Guides reporting an avocet on the Meadow at around 2pm had me quickly changing plans and heading straight down there. From the Burgess Field gate I soon found the bird, asleep on the north shore, and I also spotted an unidentified birder watching it from a distance, presumably the finder. At this point a couple of walkers who were heading south across the Meadow towards the gate found that they couldn't get through because of the deep flood water there (this often catches people out) and so decided to circumnavigate the flood water by walking right along the shoreline! Of course everything flushed including the avocet but fortunately a few minutes later it was back in its spot so I decided to head to the other side to see if I could get some photos. On the way I caught up with the other birder: a county birder called Peter Stronach with whom I had a pleasant chat. I managed to take some photos and sent a few texts out to local birders who might be interested though unfortunately it didn't stay too long and was reportedly no longer around an hour later so not many other people were able to catch up with this elegant wader. 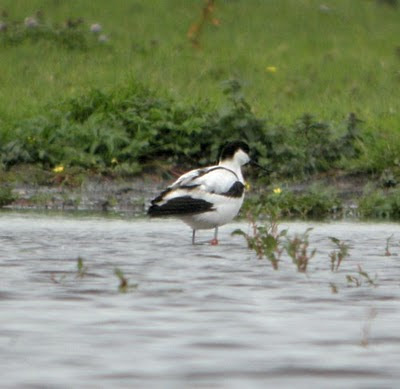 This was the best I could manage for the avocet: the usual excuses of the distance, the difficulty of focusing on a black and white bird and the fact that it was either asleep or moving around rapidly.


Here's some video footage of it having a wash and preen.

The next day I checked the Meadow as usual though there were no passage waders and the highlight was a passing wheatear. Back home, my daughters had been pestering me for a Morton's sandwich for lunch (a treat we sometimes indulge in for Saturday lunch) and I'd agreed to go and get them in. I'd just stepped out of the house when I heard the mewing call of a buzzard and looked up to see four birds circling really high over the house. I nipped back in and got my bins and gave them a good grilling: one of them caught my attention so that I stayed there watching them for as long as they were in sight. I even managed to get my scope out and on the bird for a minute or so. Here's what I saw: the buzzard in question had a noticably longer tail than I'd expect for a common, a small sticking-out head, more rounded wings (more like a hawk than a buzzard) and what looked like a much more rounded tail: indeed the outer tail feathers were very short compared to the others which gave the rounded effect. When I got the scope on it I couldn't see any distinguishing marks other than some dark areas on the wings, it otherwise being a rather pale bird. This bird was being harassed occasionally by one of the other birds so that it would tumble to get out of its way. They were circling over the house for a few minutes before drifting off to the west, perhaps to Wytham Hill to gain height. After I'd done my lunch run (and eaten it) I called our esteemed county recorder, Ian Lewington and told him what I'd seen. I carefully didn't look in any books before calling him as I didn't want to influence what I'd seen. He said that it all sounded spot on for honey buzzard (which is obviously what I'd been thinking) and the fact that the outer tail feathers were much shorter apparently is a honey characteristic (which I'd not known). Juveniles often don't have the diagnostic three tail stripes and the markings can be very variable. There have been quite a few reports of honeys the previous few days going over west London so the time of year was spot on though not many of them ever get as far west as God's own county and they're really hard county birds to get (I know of quite a few seasoned Oxon birders who still need it for the county).

These birds are hard to identify correctly and I don't have a vast amount of experience other than some brief views in the New Forest and quite a few hours spent pouring over books and photos in preparation and anticipation for the day when one might fly over but it ticked all the right boxes. In the space of a few days I'd gone from "patchless of Oxford" to "patch-rich and tick happy" or whatever the opposite of gripped should be - "crippled" perhaps? 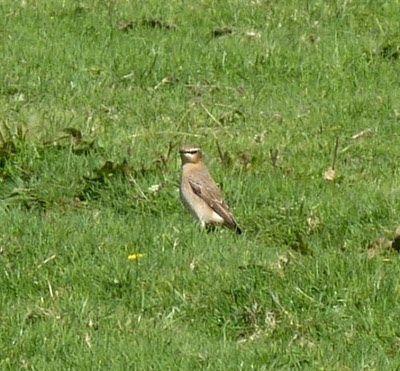 I didn't get any photos of the buzzard so instead here's a poor photo of a lovely autumn wheatear. I love these birds though I don't often find them on the Meadow so I always get excited when I find one
Anyway, now that I've got the patch back my target for the autumn is to find an American peep on the Meadow. Not that impossible as we had a pair of pec. sands there in '07. One of these years I'll find one.

Earn free bitcoins over at Easy Bitcoin Faucet. Up to 33 satoshis every 10 minutes.