I'm afraid that there's yet more USA birding to report. In this section we're heading south towards canyon country, stopping off at various locations. It was very much a case of snatching a few moments birding when one could but I managed to see a few interesting birds en route. The main bird that I would see whilst driving was the red-tailed hawk which was pretty common place. However, as we were travelling south through Idaho I started to spot some birds with long necks and down-curved bills which took me a little while to place until I got a close enough view to realise that they were white-faced ibises. They seemed to be quite at home in the big open fields, sometimes congregating near the giant watering machines where the ground was softer. Once we got too far south I stopped seeing them but for a while they were quite frequent.

We had plenty of time as we headed south so we would often look out for somewhere interesting to spend some time before heading on to our accommodation for the evening and State Parks were often sought out. They cost a few dollars to enter and usually have sheltered picnic spots where we could have our sandwiches. The first one we went to was Bear Lake SP which consisted of a very large lake with a reedbed nature reserve next to it. A very brief stop at the NR found a couple of white pelicans cruising around at a close distance which all the family enjoyed seeing. There was also a pie-billed grebe at close quarters with its unmistakable bill and a more distant western grebe. 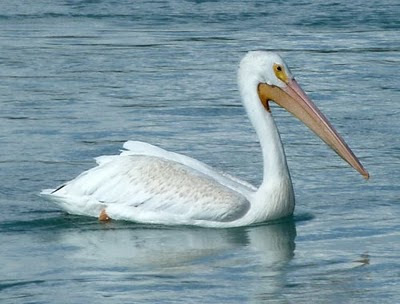 White pelican at Bear Lake NR
As we drove around the side of Bear Lake we came across a Bullock's oriole busily going back and forth with insects in its beak, obviously feeding a family. 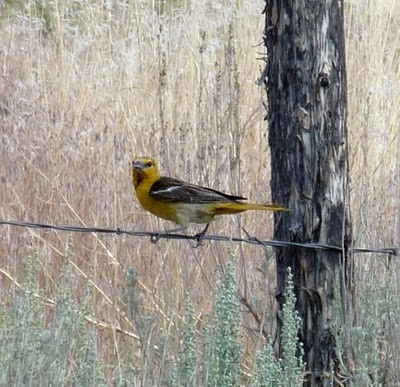 Bullock's oriole
At the lake iteself an unidentified shore bird flew by and there was a large gull which I looked like a herring gull to me though according to my field guide these aren't too common inland. I also came across a norther flicker feeding on the grass nearby. We stayed the night at a town called Logan which was largely birdless apart from a fly-over house finch.

The next day we spent a very pleasant half day at the Great Salt Lake at Willard Lake SP. There were very few people here, plenty of shade, a nice picnic area and some warm salty water to swim in. What's more there were a few birds to look at including some gulls. On the shore I found several ring-billed gulls and also some California gulls: about herring gull sized though with a mantle colour that was a shade darker. 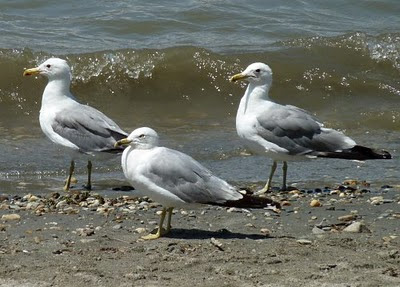 A ring-billed gull flanked by two California gulls.
There were several common grackles around, calling noisily from the trees and also some American goldfinches, including some bright golden males. 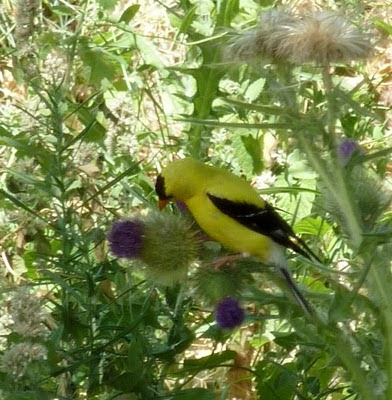 A male American goldfinch
On the lake itself were some more western grebes and I even managed to find a Clark's grebe in amongst them. 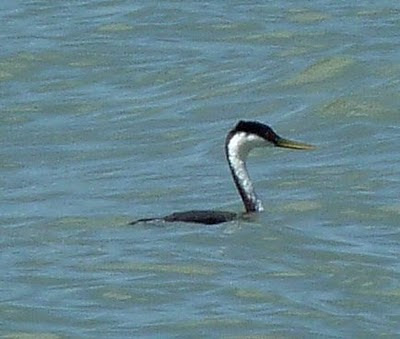 This western grebe got reasonably close... 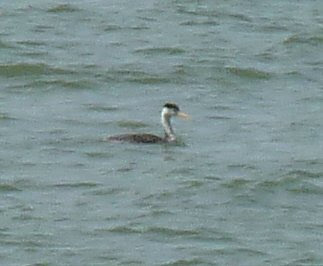 ...whereas this Clark's grebe was much more distant. Note the yellower bill and that the area around the eye is white rather than black (c.f. previous photo).
As we sat and munched our sandwiches I would keep an eye on what was flying around on the lake: a bit like sea watching though with much warmer temperatures! As well as spotting a flock of white-faced ibises I also saw some distant small gulls with black-heads and a dark grey mantle colour and a noticable white trailing edge to the wing which I deduced could only be Franklin's gulls. From the maps in my field guide I later found out that there seems to be definite colony of these gulls on the Great Salt Lake so I was pleased that my identification skills had been backed up.

I went for a little wander around the area whilst the rest of the family chilled out and I found a calling Eastern kingbird. I then discovered that it had a newly fledged chick which was sitting right in the middle of the grassy area. Fortunately there weren't many other people or predators around so it might have managed to get to some cover eventually. 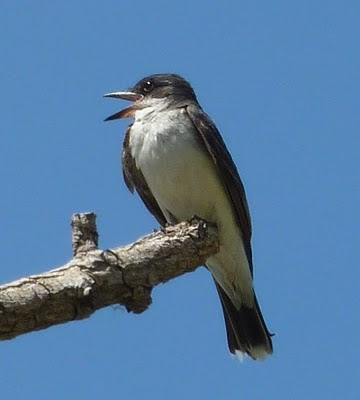 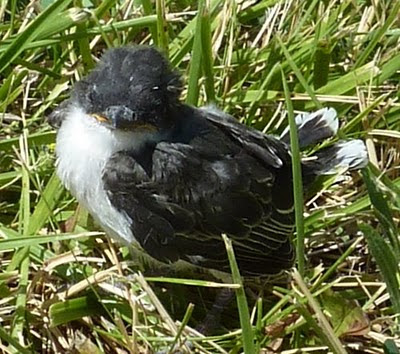 ...and it's newly fledged chick, rather vulnerable on the grass
That evening we stayed at Park City, which once hosted the winter Olympics. It turned out that our hotel was right next to a very nice path which ran alongside a stream and some scrub area which was full of birds. There was a large roost of thrushes and on an evening stroll I saw literally hundreds of thrushes (mostly American robins) flying in to the bushes. The next morning I was out again early and I found: several song sparrows singing away, some lazuli buntings (very colourful blue and orange buntings), a black-headed grosbeak (large finch-like birds which have huge bills as suggested by their name), broad-tailed and black-chinned humming birds and quite a few cedar waxwings, which looked very out of place in the summer time, since I always associate waxwings with the winter. 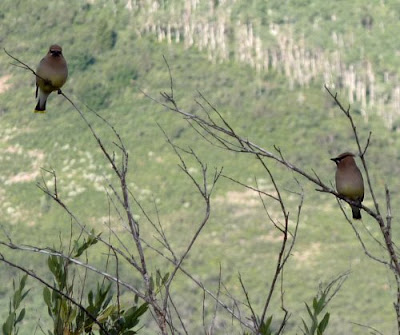 A pair of cedar waxwings
The next stop-over was a real one-horse town called Beaver which had very little going for it. I went for my usual morning walk around the back of the hotel which was basically scrub land and which was quite close to the I-70 road so rather noisy. To my surprise I managed to find a few interesting birds. Firstly I came across a small flock of what looked like shore larks to me but which are called horned larks over there and which over there hang out in a wide variety of grassy areas rather than just along the coast as our birds do. I also saw some meadow larks, which are very large yellow-fronted larks with a flutey song. Another Bullock's oriole was also seen and along the fence posts I came across a flock of juvenile lark sparrows. Finally as I was walking back to the hotel I heard a familiar piping call and looked up to see what looked like a green sandpiper flying overhead though no doubt it was actually the American equivalent a solitary sandpiper. It was strange to see a wader flying over what was basically a scrub/desert habitat though there are quite a few lakes along the way for it to re-fuel at. 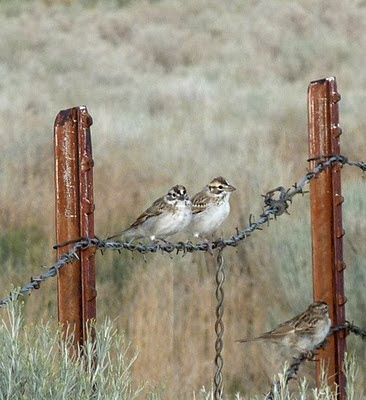 Juvenile lark sparrows
I'm afraid that there's still more to come so watch out for part IV.
Posted by Adam Hartley (Gnome) at 18:41