The first Friday of the month is Non-Farm Payrolls day. I suspect that for most of you this won't mean much but it's the most important economic news release of the month and there are often extreme reactions to the news in the financial markets as it comes out. As someone who works with the markets I was keyed up to see what the new number was going to be and how the market would react. The news was to be released at 1:30 pm as usual and with 10 minutes to go my business partner had phoned up to discuss the pending number. Five minutes to go and I'm all action stations, ready to follow the volatility of the market. Then with four minutes to go I get a call from "Badger" saying that there's a spotted crake at Radley. What to do? Actually it was a pretty easy decision: the NFP will be there again next month but the spotted crake won't so a few minutes later I was bundling my gear into the car and heading off to Abingdon. Of course there's a slow tractor crawling along the road on the outskirts of Abingdon and of course it turns off at the Radley exit but eventually I arrived at Thrupp Lane, parked up and hot footed it down to the Small Ash Pit. Knowing how elusive crakes are I was expecting to hear that after having been seen initially it would be back skulking in the reeds and that I would have to spend the next five hours staring at the reedbed waiting for it to show but uncharacteristically it was remarkably showy and was on view practically all the time. It was rather distant as it was in the far corner of the pit but it was continually venturing out onto the mud (or ash actually) and even saw off a green sandpiper that got too close. The pit is looking rather good at present and in addition to the star crake there were three greenshank, three green sandpiper, one yellow-legged gull amonst the commoner loafers and overhead was a red kite and a couple of common buzzards. I took my usual record shots of the bird and spent some time chatting with the other birders present before making my way back home to review the carnage of the financial markets retrospectively. 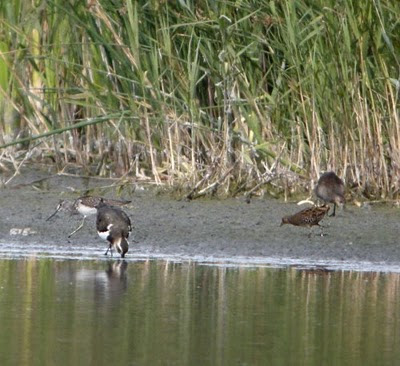 A distant still photo, showing a greenshank and a lapwing as well.... 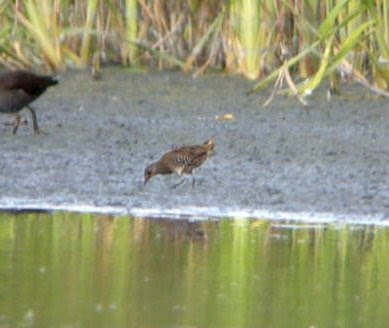 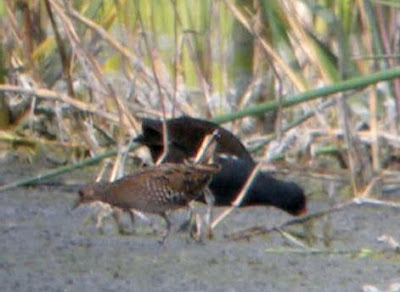 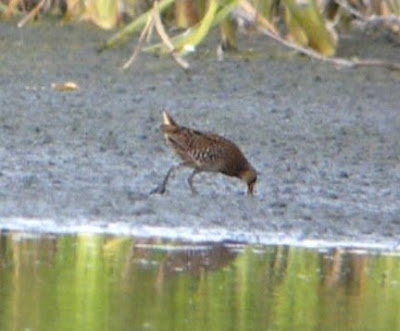 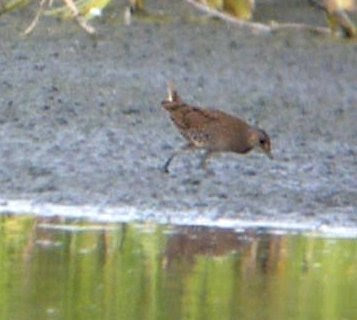 ...and some digiscoped record shots which were rather spoilt by the heat haze
Spotted crake is one of those birds that show up each autumn and which I've been meaning to go and see for a couple of years now but haven't yet got round to it so to have one fall into my lap like this was great and meant that I could get it for both the county and life list simultaneously. To get such great views was also really fantastic and has saved me many hours that I was going to have to spend staring at a reedbed which is much appreciated.

By the way, I've been thinking more about my honey buzzard sighting from last week and whilst I was fairly happy with what I saw at the time, with hindsight I'm not sure enough to have it as a county tick and I am therefore downgrading my sighting to a "probable" (and reducing the various list totals by one as well). I've also decided not to bother with keeping my year lists on the blog for the time being as certainly this year, listing is not something that I'm focusing on at all. I may change my mind at some point, we'll see how it goes.
Posted by Adam Hartley (Gnome) at 17:12

eToro is the #1 forex trading platform for beginning and advanced traders.