With Christmas safely out of the way and having decided that I wasn't going to restart work until next week, I found myself with a quiet and mercifully empty week in my diary. The whole maelstrom of over-indulgence, visiting relatives and having people come to our place had rather taken its toll and I was looking forward to some quiet time: there was a wholesome New Year's Day walk booked up but apart from that this week was all free. Naturally I thought that one final outing to round off the year would be a good way to unwind and there seemed to be some interesting things happening down on the south coast so I decided on a New Year's Eve sortie. I spoke to my VLW who said that she needed some items from Ikea so I hatched a plan that would involve the Southampton branch of this store. I then phoned up the Wickster who confessed that he still needed Ikea on his life list (the Southampton store would just be a year tick for me) and he was therefore keen to come along. In order to pad out the day we looked around for something else to visit en route and it turned out that Portland was on the way (certainly by my way of reckoning) so we might as well have a look in there where apparently there was some rare auk about. I suggested that we might also pop into Gosport to see the Ring-billed Gull there as that was quite close to Southampton as well. With the weather forecast for howling gales at Portland first thing but easing off later in the day we decided to eschew an early start and thus it was that I picked Tom up at the relatively civilised time of 8:15 a.m. and we headed off to get him his Ikea life tick.


The roads were wonderfully empty as we sped southwards in the Gnome mobile. I'd set up my RBA account to receive bird news of the Portland Brunnich's Guillemot but my phone was ominously silent as we travelled along. We hypothesised that the bad weather probably meant that it was sheltering in amongst the boats out of sight though with the Ikea twitch the main event of the day we were fairly relaxed about the lack of news of course. After a while we hit a wall of torrential rain and strong wind - clearly the bad weather that had now moved on from the coast. With it also came a "still present" text message, backing up my theory on the bird, and we both relaxed and enjoyed the rest of the journey.


After a quick pit stop at Ferrybridge to use the facilities it was straight on to the huge (and free!) car park by Portland Castle at the south end of Portland Harbour. The car park was literally just a few yards from the water's edge where we soon found a relatively modest count of a few dozen birders tracking the movements of the target auk. When we arrived it was over to our left by the marina and as we hurried over we could see the bird in the distance porning it a few yards from the bank. We got there just as the bird started to move off along the bank and we tracked it as it swam quite large distances underwater before bobbing up, always close in to the bank. It turned out that it had a regular circuit that it would take, starting on the far west side of the marina (where it was basically out of sight) and working its way eastwards through the marina, out of the inner sea wall of the marina towards the castle and towards the Aqua Hotel. It was often really close to the bank, too close for scoping, and I set about photographing it with my superzoom camera. It was a cute little thing, looking very much like a Guillemot though of course without the extensive white on the cheeks and throat. In fact this bird hardly had any white about the head, lacking most of the white throat area of a winter plumaged bird apart from a small area beneath the bill. The white gape line was noticeable and it had darker (more Razorbill-like) colouring than the brown of a Guillemot. The bill was also shorter and stubbier than its commoner cousin. At close quarters auks always look somewhat comical as they float around on their tummies. To me they look like a fat man laying face down on a lilo who hasn't got the strength to lift his head up but just paddles around with his feet which are dangling down in the water. Of course once they dive down its a different matter and they are transformed in to sleek fast hunters of small fish. 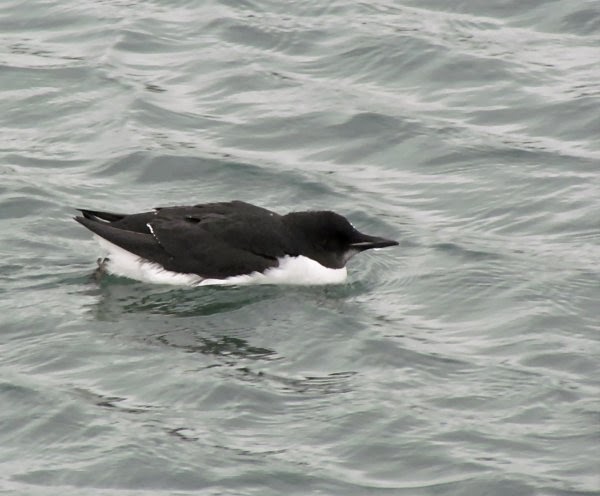 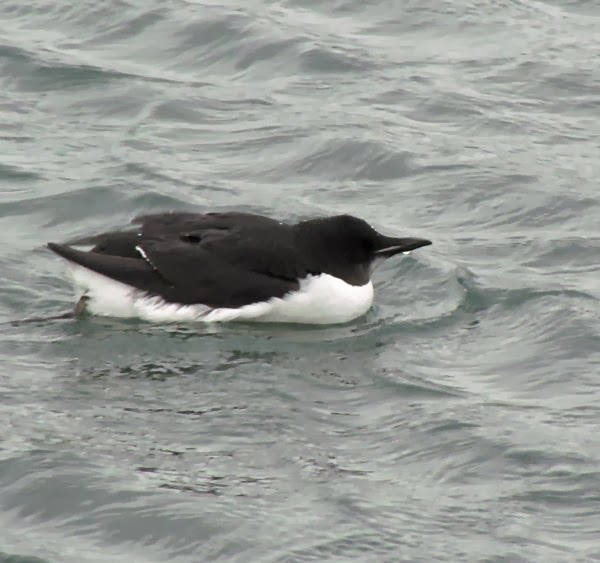 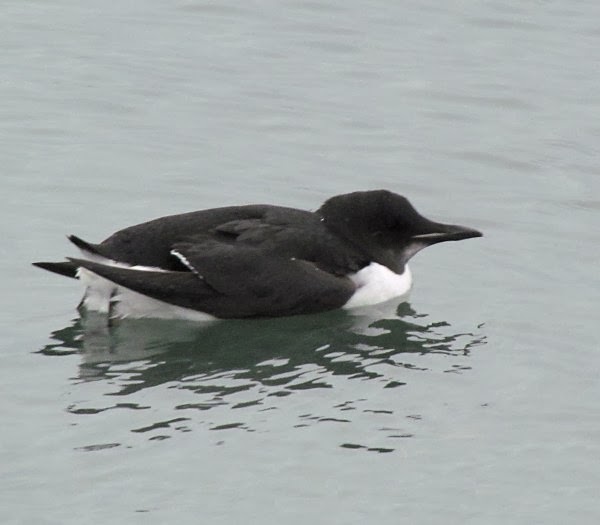 One couldn't ask for better views of the Brunnich's Guillemot


Some video, thankfully stabilised by youTube as I didn't use a tripod


After a while the bird moved out a bit to negotiate a pipe that was extending out into the water so we took the opportunity to scan the open harbour from here. Now the Wickster, is a hardcore county birder and does a county year list each year. This year he came top in the county with a creditable 185 from what has been a rather poor year county-wise. This does tend to mean that he doesn't get out of the county much otherwise and that therefore his national year list was rather low. He reckoned that he was still a few short of the 200 mark and was keen to mop up a few year ticks so he was giving the harbour a thorough grilling. We managed to turn up all three Diver species, the resident Black Guillemot (which was quite close in), quite a few Razorbills, lots of Red-breasted Mergansers and a single female Eider duck. Tom also managed to winkle out a Common Guillemot in the distance which he also needed. Including the Brunnich's he managed eight year ticks in total.


After a while with a rain shower threatening I went back to the car for some shelter and a snack whilst Tom continued to scour the harbour. On my return I wandered over to the marina where the Brunnich's had last been seen. There I met up with Wayne Bull, Phil Brown and another county birder (who's name I don't know) who'd all come down to pay homage to the auk. The star bird was on the far side of the marina but after a while worked its way back to our side where once again it gave crippling close-in views. Tom and I followed it for a while until it moved further out to shelter from the weather behind a boat. We both agreed that we'd had our fill and after another brief scan of the harbour by the castle we headed back to the car.


The next stop was a brief tick and run for a first winter Glossy Ibis which had taken up residence nearby on the east side of the Radipole marshes. Neither of us wanted to spend much time with this bird and we couldn't be bothered to put on our boots so we stood at the end of the asphalt and scoped it distantly. We could seen Wayne Bull in the distance who had got much closer where he was rewarded with some decent photos (see here) though I was content with a distant record shot and Tom was happy to add another bird to his year list total. 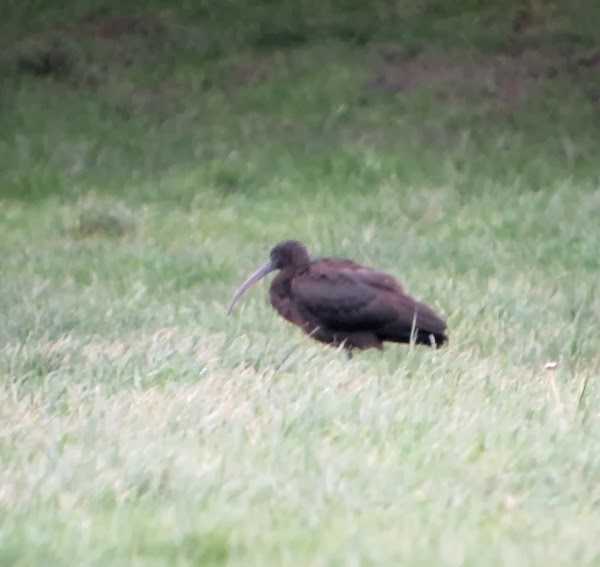 A distant record shot of the Glossy Ibis


Then it was back to the car for the long slog back to Southampton and the superstore highlight of the day. As mentioned above, I was keen to do a modest detour for the wintering Ring-billed Gull at Walpole boating lake in Gosport. I'd seen the same bird a few years ago but now as a more experienced laridophile I was keen to re-visit it. Just as we pulled up all the gulls seem to fly up into the air and to circle around overhead. We couldn't work out what had put them up but we couldn't see the target Gull anywhere so realised that we'd have to look for it and headed over to the tidal creek at the back of the park. Tom confessed that he was actually glad to have to look for a bird and that he'd been finding it a bit dull to have the Brunnich's and the Ibis so easy to find. I don't know - you give someone a Mega on a plate and all they do is complain! Over by the creek we found a Redshank, a Little Grebe, lots of Black-headed Gulls, a Med Gull and quite a few Brent Geese. There were a couple of Gulls of about the right size for Ring-billed though without scopes it was hard to tell so we decided to head back to car via the ponds and to get the scopes if necessary. Fortunately, on the way back Tom picked out the Ring-billed Gull back in the middle of the boating lake, no doubt refreshed from having had a little fly-around. 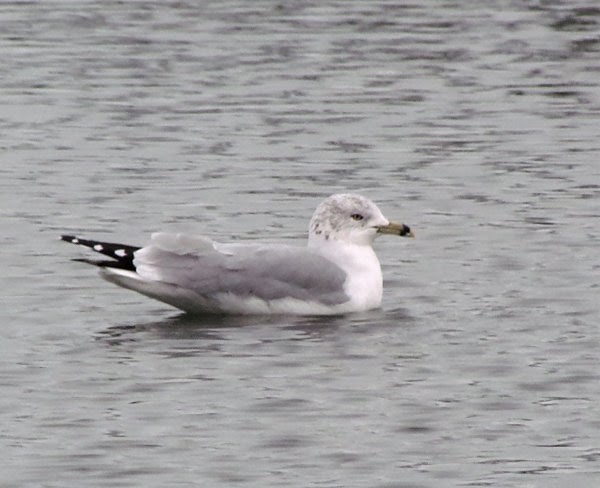 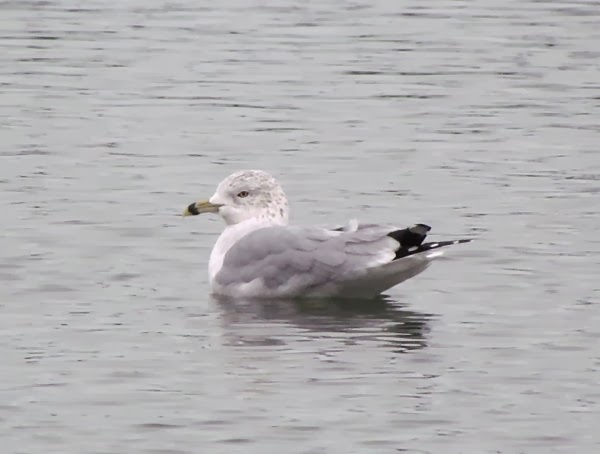 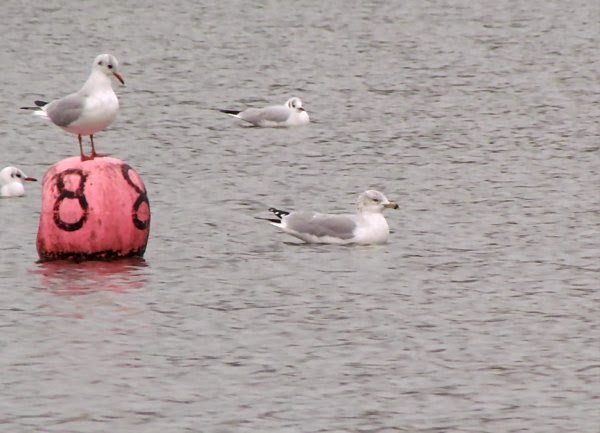 I was keen to study it closely in order to aid with one of my ambitions of finding one on Port Meadow in amongst the gull roost. The first thing that I noticed was that the mantle shade was a bit darker than I expected. It was certainly darker than the Black-headed Gulls next to it though not as dark as the Common Gulls that were also present. However, whilst these latter species were dainty and cute, there was nothing cute about the Ring-billed, with its thick chunky bill and strikingly pale eye (a diagnostic feature) it had a rather menacing look about it. It had a large white mirror on the underside of the primaries and what was a fairly pronounced white tertial crescent for this species - usually this feature is rather muted. All in all it was great to have an opportunity to get a feel for the jizz of this species at such close quarters.


Finally, it was on to the main event. A half hour drive saw us on the main through-road in down town Southampton where we soon spied the blue and gold colouring that instantly identifies an Ikea store. Tom had texted his girl friend asking if she wanted anything from Ikea and she'd sent back a large list of unpronounceable Swedish words. Tom certainly got an opportunity to earn his tick for this visit with lots of searching involved trying to track down the items on his list, none of which were keen to give themselves up too easily. By contrast my list was relatively simple and I soon managed to get all my ticks. Having finally found everything, we had a reviving cup of tea before loading up the boot with our booty and climbing back into the Gnome mobile. On the way back we basked in the warm glow of a successful outing: we had a boot full of Swedish storage solutions, and more importantly we'd both loaded up on that most valuable of commodities namely Brownie Points. Oh, and we had seen some nice birds today as well. Tom had managed to add 10 year ticks to take him easily over the 200 mark and I'd enjoyed some mega auk porn and some good Gull jizz. What more could you ask for to round off the year?