This is turning out to be a very promising yet strangely frustrating spring here in Oxon. Yet another Code Red scramble occurred yesterday with yet another county Mega after the recent Whiskered Tern but once again the bird proved elusive and once more many county birders were left frustratingly high and dry.


It was proving to be a rather dull Wednesday morning with my work. Once again the markets were lifeless and I was casting around for something to do. My business partner called up and we started to chat when suddenly my mobile rang (always an exciting sound at this time of year). I cut short my conversation and turned my attention to the mobile.  It was Dai John - could he have found something at Farmoor? It turned out that he had, a Spotted Sandpiper no less! This was a county Mega: only two previous records, one in 1989 and another the following year, both at Farmoor which seems to hold the monopoly on this species.


I hurriedly posted something on the Oxon Bird Log and started to get my gear together. At that moment Dave Lowe called - he was stranded in south Oxford without a car so I agreed to pick him up en route. The traffic was surprisingly bad all down the Abingdon Road and much of the ring road and we seemed to crawl along for ages. Finally though we were heading out towards Farmoor and as we neared we could see a group of three birders standing on the embankment of F2 (the larger of the two concrete bowls that make up Farmoor) by the car park - that looked promising and also made for only a very short walk from parking the car!


We finally arrived, got our gear together and hurried up the embankment to join the birders which turned out to be Wayne Bull and Barry Batchelor, with Roger Wyatt having walked off. The news wasn't good: the bird was flushing every time a car or walker passed by and in fact only Roger and Dai had managed to see it. The good news was that it seemed to be favouring the south east corner so we decided to hang around here. I called Roger who was by now half way along the south shore to check how he was getting on but he'd had no sign. The weather was incredibly windy and the strong westerly was whipping up waves as it blasted into our faces. It was also very changeable, with squalls of rain interspersed with periods of bright sun so the light was constantly changing. Swifts and hirundines were battling against the conditions and a few Common Terns were zooming around. All in all it had an exciting and yet somehow very chaotic feel to it - no wonder the bird was so flighty. I started to get calls from various birders wanting to know what was going on so spent quite a while on the phone. Whilst talking I picked out a Sandpiper flying low over the water towards us and put Dave onto it. It landed about 150 yards from us though turned out to be a Common.


We decided to spread out a little to increase the chance of finding it. So leaving Wayne Bull staking out the south east corner we wandered back towards the tower by the car park. At that moment a couple of Sandpipers flew in front of us, flying just above the waves. The weather was very dull at this moment but we could all pick out the two birds and excitedly noted that one of them had much reduced wing bars compared to the other which had a strong bar all the way across the wing. It looked promising! The birds flew in to the south east corner and as soon as they landed Wayne started waving at us! We ran towards him and there then ensued a scramble to get on the birds. I hadn't even assembled my scope yet so hurried to do this. At this point the inevitable happened: one of the Thames Water white vans came round to the corner and of course the birds flushed, flying out past Roger Wyatt who managed to get some flight shots before he lost sight of them as they headed towards the causeway. 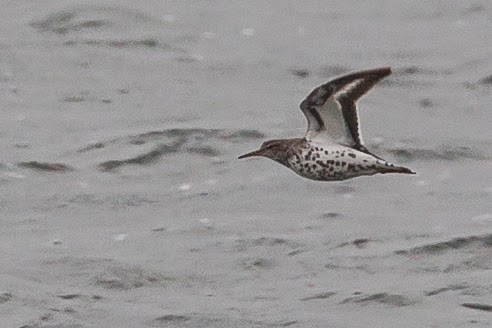 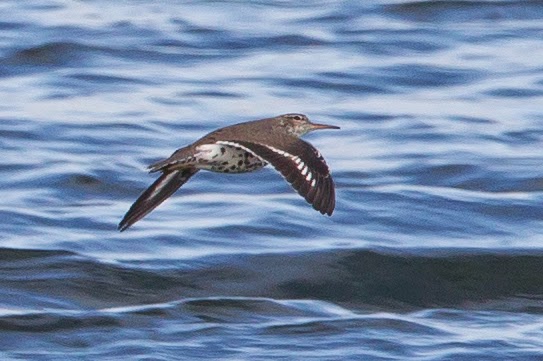 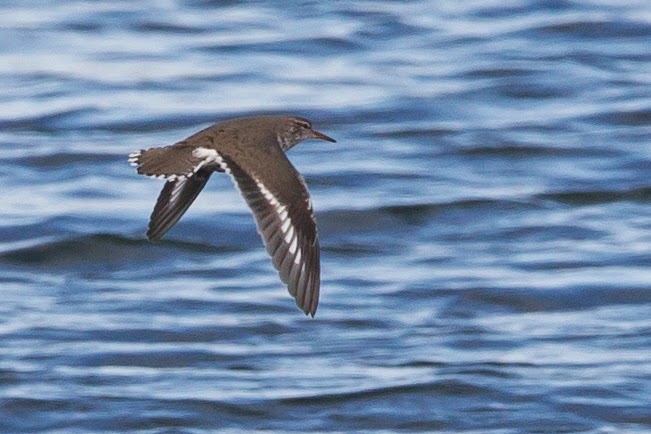 At this point Ewan Urquhart turned up and gradually all the local birders who were in the county (a few are away at present) arrived. However sadly the bird was never seen again despite some heroic searching from people like the Wickster who'd jumped on a bus from Wallingford when the news broke and subsequently walked the entire perimeter of both reservoirs all to no avail. We did find a few Common Sandpipers along the north shore of F1 where it was quieter as F1 had been closed for works there but sadly no sign of its rarer cousin. News broke on RBA about a Spotted Sandpiper which had turned up at Draycote Water in Warwickshire, some fifty miles away though it seemed unlikely that the bird could have made it that far in such a short period of time since it was last seen.


So in the end it all turned out to be very frustrating. Only six of us got to see the bird and for most of us the views were very brief either in flight or on the deck for a matter of moments. Congratulations should of course go to Dai for finding such a rarity but for most us (even those of use who saw it), it was ultimately a very frustrating experience. Let's hope that it gets refound and lingers long enough for us all to enjoy it properly.