On Sunday I was checking out my Port Meadow patch once more. It was late afternoon, nice and sunny with just a gentle breeze. The Meadow floods have been rather empty of late - all the winter birds have cleared off and we've had surprisingly few spring passage waders so far by way of compensation. I was heading north between the river and the floods to my usual scanning point in the "elbow" of the L-shaped flood waters when up ahead I happened to notice a large bird fly in and land on the flood waters. A quick look through the scope immediately identified it as a Spoonbill. Now from past experience I know not to hang around when one lands on the floods. The first one that I ever found on Port Meadow was back in the day when they were still something of a rarity and it would have been an Oxon county tick for quite a few people. However that one had immediately flown off before I could take any kind of record shot. I've subsequently had a pair of Meadow Spoonbill fly off on me before I could take a photo so I didn't hang around and immediately took some digiscoped video footage. I then set about putting the word out. As I said, it's not the county rarity that it once was but I thought that some people might be interested so I sent a few texts to local birders and county year listers and put it out on RBA. I'd just finished doing that and looked up to find that all the gulls and also the Spoonbill had been spooked by something (I think it was a deflating helium party balloon coming in to land). Anyway, the bird didn't linger but flew off south roughly following the river. As it flew I could see the black tips to its wings which made it a 1st winter bird. A nice bird - shame it didn't stay around for others to enjoy. At least I'd not dallied and had consequently got some sort of record footage of it for posterity. 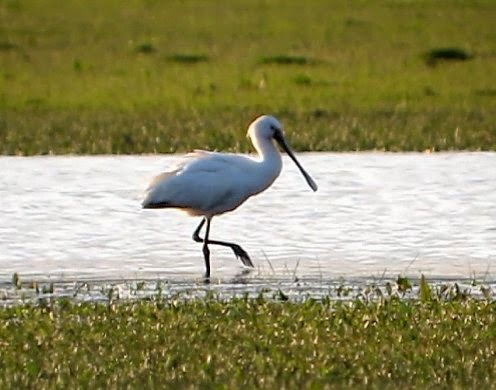 A grab of the Spoonbill...


...and the video it came from


The next day on the Meadow I met Matthew Foster who birds there regularly. He's a very interesting chap who's birded locally for decades and can tell you about how many hundreds of Lapwing there used to be on the Meadow in the 70's etc. and how there used to be Tree Sparrows nesting in the trees around the edge of the Meadow. He doesn't seem to have a mobile phone, nor access to the internet at all so is completely off the birding grid, just quietly going around and taking handwritten notes in his notepad. Anyway, having in the past lived up in Wolvercote (which is why he knows so much about Meadow birding) he now lives in Kennington. He told me that he'd heard a Spotted Crake singing away in Kennginton by the river yesterday evening. I diplomatically asked him about the call and his description was spot on (he's quite good with bird calls). I put the word out on the Oxon Bird Log and the next night someone else checked it out and confirmed that it was indeed a singing Spotted Crake.


Having never actually heard one sing before I decided I'd go to check it out for myself so at around 8:30 pm yesterday evening I set off in the Gnome Mobile and parked down the end of Heyford Hill Lane (about here) which by studying the map I reckoned would put me right next to the Crake field. According to Google maps this contained a nice looking small pond surrounded by lots of reeds and scrub. Sure enough as soon as I arrived I could hear it calling intermittently though it would stop for periods; however once it got properly dark its singing became stronger and more regular. There was no chance of seeing it of course but I passed a very enjoyable three quarters of an hour watching the night fall whilst listening to the call of a hidden Spotted Crake.

Some video footage of it calling 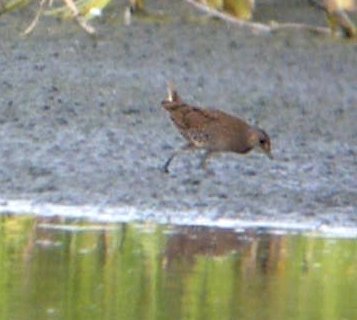 Here's a reminder of the very showy bird from September 2010 at Radley which was uncharacteristically quite happy out in the open. See here for write-up