Today was my VLW's birthday. She's now in her very very very late thirties (or so she likes to tell me and who am I to argue). The only problem was that she was feeling rather under the weather today so it was a rather low key affair. She opened her cards in bed with her usual cup of tea and we had a nice roast lamb for lunch. We were just settling down for our post-lunch hot drink when my mobile rang: it was Justin Taylor calling to say that the warden at the Bicester Wetlands reserve had managed to find a Red-necked Phalarope! Normally Badger, who's very much the central hub of county birding information, would handle such a call but for some reason he wasn't answering so Justin had stepped into the breach and started calling around. I took down the details carefully in order to blog it but on this day of all days what my VLW wanted was going to be what we did and I didn't think that seeing a Phalarope would rate too highly on her birthday wish list. I went back to her to see what she wanted to do and the birding gods must have been smiling on me because miraculously she wanted to take a nap in order to try and recuperate so I had our two children for the afternoon. A quick consult on the map and I realised that Blenheim Palace wasn't a million miles from Bicester so quickly I hatched a plan: my VLW would go for her nap and I'd take the kids for a blitzkreig twitch of the Phalarope before we would head over to Blenheim where our younger daughter wanted to visit the Butterfly House and our son wanted to go on the little train there. I ran up to my office in order quickly to post the news on the Oxon Birding Blog (though I later realised that in my haste I forgot actually to save it) and I sent out a few texts to local birders. Then we hurriedly got our stuff together and it was off up the A34 towards Bicester.


I'd only been to the Bicester Wetlands Reserve once before (for the Glossy Ibis last year) but I managed to remember where it was. I pulled in the car park right by the Tower Hide, got my gear together and run up the steps to the hide whilst the children amused themselves in the car. Inside I found the warden and also Justin, who was busy putting the news out and updating the blog. The bird was on view constantly though rather distant, busily feeding away like a little clockwork toy, pecking at countless insects on the water's surface. As I had only very limited time I hastily set about taking some digiscoped shots and a bit of video though back home I later discovered that much of it was too out of focus to use - had I had more time I could probably done it more justice. It was a very smart bird in full summer plumage - I'd only ever seen one once before in Gloucestershire in transitional plumage to winter so this was a real treat for me. 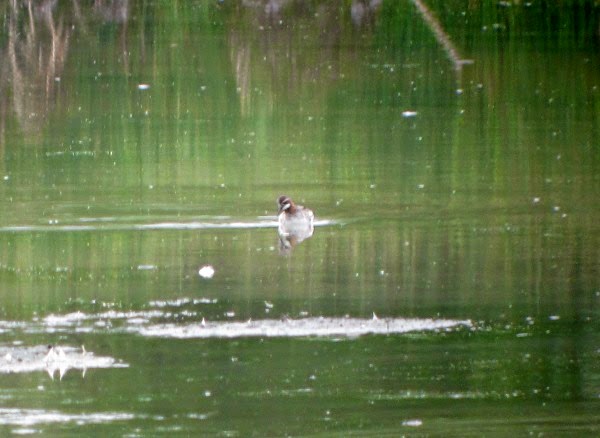 I'd have loved to have stayed longer to admire the bird in more detail but with two restless children in the car I stayed no more than about five minutes before hurrying back down to them and setting back off on the road. We then cut across country towards Woodstock where, because it was rather late in the day, I bit the bullet and actually paid the entrance ticket (rather than parking in town and walking in the townie's gate) in order to maximise our time there. Still it was definitely worth it for having been allowed to nip in to see the bird. We then passed a very pleasant afternoon together, first having a spot of tea, then the kids went on the adventure playground whilst I took a call from Badger: he'd apparently had such an epic night on Saturday drinking that he'd only just got up, staggered along half dressed to the Phalarope, ticked it and then staggered back home to bed. I'm glad to see that married life hadn't dulled his spirit! After that we went in the maze, then the Butterfly House and finally the train. All in all a very nice afternoon indeed which everyone enjoyed. We arrived back to find that my VLW had had a nice nap and was feeling much better.

What a great treat it was to have such a county rarity drop in like that - the only one in the last fifteen years apart from the untwitchable "probable" June last year. A great time to get a county tick just before the summer doldrums kick in.