Given that May is one of the best months of the year for birding, you'd think that I'd be zipping all around the country at the moment, picking up ticks left right and centre. Not so, gentle reader, not so - in fact it's all been rather quiet. I went to Farmoor to see the gorgeous summer plumaged Black-throated Diver on the day that it arrived though by the time that I'd got there it was rather distant so I didn't bother with any photographs. Even then I thought that it looked rather unwell: it spent a lot of time floating on its side with its belly out of the water and photos on subsequent days have shown that it has a wound there. Let's hope that it doesn't get infected and that the bird manages to heal properly and to move on north to its breeding grounds in due course.


Apart from this diver-sion (see what I did there?), I've been stuck at home helping my VLW with her Art Weeks showing. This meant that when news of the continued presence of the Greater Yellowlegs down at Titchfield Haven came up this week, I was unable to do anything about it. This bird has been rather frustrating: it first appeared back in January of this year but has never been seen more than one day at a time before it disappears for days or even initially weeks on end - where it goes to nobody knows. It seemed that the only tactics for it are to go for it on the day that it's reported and to hope that it sticks around long enough on the day for you to get to see it. Also, very often it seemed to be reported on a Saturday which is about the worst day for twitching for me so I've been "frustrated of Oxford" for many weeks now. When it turned up on Friday I was all set to go until my VLW reminded me that she'd be out that afternoon so I had to mind the art shop. Grrrr! Actually it turned out well because it flew off about half an hour after the initial report and wasn't seen again that day so I inadvertently dodged a dip there.


This weekend, for the first time it was reported on both days though of course I still couldn't go. Was it changing its habits though and sticking to the reserve? Finally today (Monday) I was free to have a crack at it. Given that Titchfield Haven is relatively close to Oxford I decided that despite this potential change of habits I would still wait on news and then chance that it stuck around long enough for me to get it though it was clearly going to be a bit of a gamble. That was the plan anyway but Monday morning found much of the southern half of the country under heavy rain and strong winds and I wondered whether anyone would actually be out on the reserve looking for it. At around 9:45 a.m. with no news so far I put out a tentative "RFI" on RBA and within half an hour I was rewarded with a "still present on the scrapes" message. Game on! I knocked up a quick packed lunch, bundled my gear into the Gnome mobile and headed off down the A34 in the torrential rain. Gradually as I sped southwards the weather started to lift a little so by the time I pulled up on the shores of the Solent by the reserve it was just the strong wind that had to be contended with. As I'd been starting my final descent into Titchfield Haven a new RBA text had come through so I hurriedly scanned through it: "still present and showing well from the Spurgin hide". Woo hoo! There was no time to go and get a ticket for the reserve, I hurried into my waterproofs, slung my gear over my shoulder and hot-footed it along the path. A helpful sign told me that the Spurgin hide was the furthest away at 950 metres distance. I hurried on, starting to feel rather hot and sweaty in all my waterproof gear. Finally I made it to the hide and entered to find just two birders there. Fortunately one of them had the Greater Yellowlegs in his scope and with a quick peek I could relax.


The bird turned out to be tucked right in the corner to the right of the hide, nice and close but partially obscured by some reeds and a bush that were both being blown all over the place and continually getting into the field of view. I peeled off several layers to cool off, set up my scope and tried to take some photos. It was hanging out with a flock of some thirty odd Black-tailed Godwits and gradually this flock moved out from its corner into a more open space where I was able to take some shots of it. 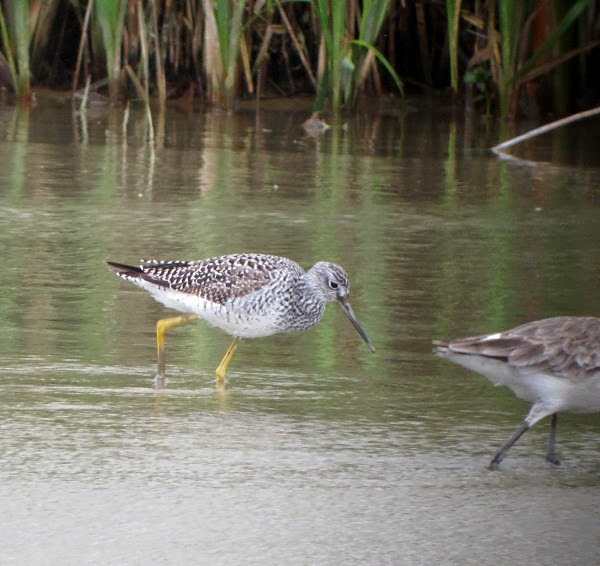 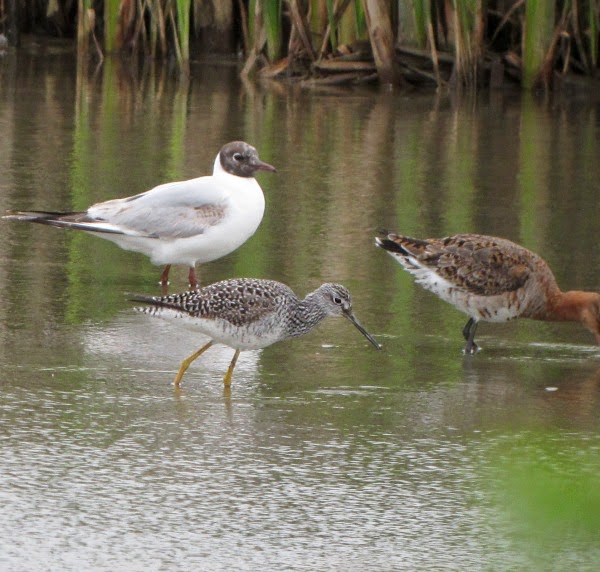 It was a very smart bird and I thanked the stars that I was able to enjoy such close views of it. From following things on the internet I appreciated that very often views were distant and hazy so to be treated to such grandstand views was a real treat. It looked just like it was supposed to: a larger and less delicate version of a Lesser Yellowlegs, a species that is forever ingrained in my mind thanks to the bird I found on Port Meadow back in October 2010. The bill wasn't as sharp as the Lesser and it had the barring down its flank and a general chunkier jizz to it. This very much made up for "Greenshank-gate" - the fiasco which saw a group of Oxon's finest twitchers (and me) bombing over to the Midlands to take a look at a "Greater Yellowlegs" that turned out to be a Greenshank. That had been really gutting, having wasted all that time and effort only to be disappointed. This on the other hand was definitely the real deal, and a very smart bird to boot. 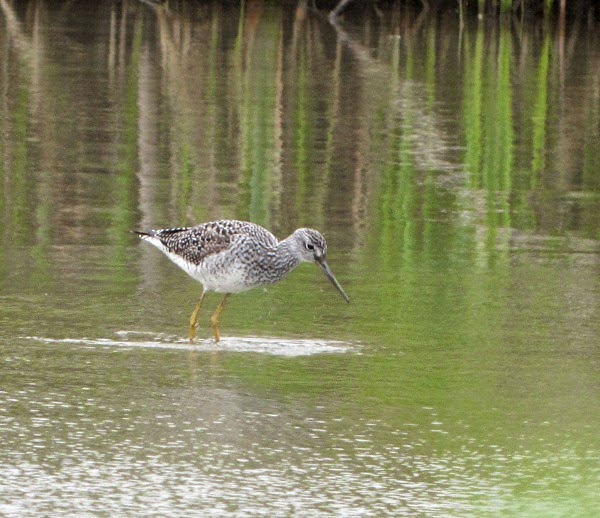 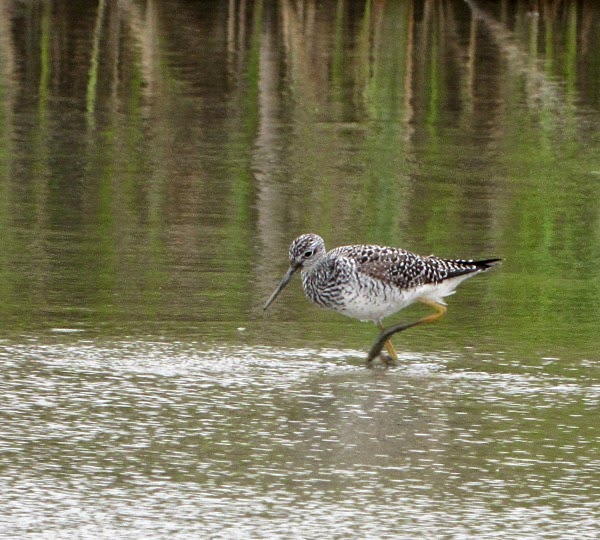 Gradually a few other people started arriving though there were never more than a mere eight people in the hide at most, a very modest showing for such a rarity though I supposed many had already seen it by now. After a while I decided that I'd taken enough photos of it and had a look around at the rest of the area from the hide: there were loads of Black-headed Gulls everywhere you looked on the scrape, a few distant Avocets and Shelduck and the odd Common Tern. A few Swallows and a single Swift were zipping around in the wind, hawking for insects over the water. It was all wonderfully birdy and I gazed out of the window at it contentedly whilst I munched on my packed lunch. Then it was time for another quick gander at the Yellowlegs which had slunk back towards the corner again.

After that I decided to head back towards the car, stopping in at all the intervening hides en route to see what I could see. These hides offered various views of the North and South Scrapes which again was mostly covered in breeding Black-headed Gulls though with a few Mediterranean Gulls in amongst them. There were more Blackwits and Avocets, a flock of Oystercatchers and the odd Redshank.


As I walked it seemed that every few yards along the reed-lined path there was a Cetti's Warbler, belting out its strident song from the hidden depths. Reed Warblers were chugging away relentlessly with their songs and Reed Buntings called to each other as they bombed about in the wind. I listened out carefully for the pinging of Bearded Tits but didn't manage to hear any. As I wandered, I stopped to look at the various plants with one of the Comfreys flowering along the path and loads of (the highly poisonous) Hemlock Water Dropwort everywhere I looked, just starting to flower.


Finally I was back at the car where I de-tooled and then drove the short distance round to the visitor centre. Here I belatedly paid for my entrance ticket and then went to the café for a celebratory cup of tea and a cake whilst I gazed out across the windswept Solent towards the Isle of Wight. Then it was back to the car and back off home, arriving back to the bosom of my family mid afternoon, just in time for yet another cup of tea. Why not - after all it had a been a very successful day out. I later learnt that the bird had stayed put until around 2:30 p.m. that afternoon when it had flown off, not to be seen again that day. So it had been on show for a total of four hours. Long enough for me to get down there and see it though, which was all that matters. Clearly, "he who dares, ticks the Mega Yank".

About time too Mr Hartley! Consider yourself ungripped

Thanks Peter, I was very pleased finally to catch up with it