As May draws to a close it signals the start of the summer doldrums when the birding gets hard. In fact things had been positively dire on my local patch at Port Meadow for about a month now with the floods now dried up and the year list stalled at a very paltry total of 113. Because of this lull in the birding action it's at about this time of year that my thoughts start to turn to insects. Indeed, I've been mothing away like a good 'un for a while now in the garden but so far it's been a very poor season with the clear cold nights and cooler days making for dismal catches. Still, there are Butterflies and Odanata to hunt with several species that I've yet to see relatively close by. One of these is Common Club-tailed, which is a very local and hard to come by species though we're lucky to have a hot spot within the county on the Thames between Goring and Pangbourne. I'd only ever once previously tried to see them but had failed dismally so when Steve Burch managed to photograph an emerging Club-tailed at Goring about a week ago I resolved that this year I'd make more of a concerted effort. I did some reading up about them and it seemed that they were well known for emerging right by the railway bridge where it crosses the Thames at Goring. According to my field guide (Brooks and Lewington) the peak time for emergence was between 1:30 pm and 3:30 pm. However, apparently once they had emerged they usually fly off to nearby woodland as their preferred habitat so it was a matter of catching them shortly after this emergence that appeared to be the  key.


Armed with this knowledge it was just a matter of getting some decent weather so that I could have a go. However, finding a decent weather window has been no easy matter this spring and with the forecast for deteriorating conditions over the next few days in the end I decided to have a punt today late morning before the forecast cloud set in for the afternoon - at the very least it would be a reconnaissance trip for a site I'd not visited previously. Thus it was that at around 11 a.m. I set off in the Gnome mobile heading southwards towards Goring. I parked up at the end of Manor Road in Goring (as per Paul Ritchie's Hampshire Dragonflies web-site) and walked along the track, under the railway and down the farm track to the river. Here I found the old brick railway bridge that I recognised from photos.


A quick scan all along the concrete embankment under the bridge revealed plenty of Banded Demoiselles though predictably no emerging Club-tails. Well it wouldn't be that easy now, would it? I started to explore along the river bank, nipping into each clearing by the river to see if I could spot any emerging dragonflies anywhere. Along the bank were singing Garden Warblers, a Whitethroat feeding a young fledgling and a singing Sedge Warbler. There were loads of wild flowers about and it was all very pretty. I came to an overgrown area and started to explore, looking for any Odonata that I could find. At this point a fellow Dragon hunter turned up. He'd been up and down the bank for some distance but had found nothing. We worked our way back towards the bridge together but to no avail. We bumped into another couple on the same mission who'd had no luck either but they soon left.


On the other side of the bridge was a lovely overgrown flower meadow which we spent some time exploring though the only Odonata action was from Banded D's. I did find a teneral Damsel though it flew off before I could get an ID or a photo. My companion, who lived locally, wandered back off home and I wondered what to do. I decided to give Peter Law, a keen Odonata'er a quick ring to see if he had any advice. It turned out that he was at Aston Rowant photographing Adonis Blues. He said that he didn't know the Goring site as he usually went to Pangbourne instead but he hadn't seen any there over the last couple of years. I was starting to appreciate just how hard it was to see this species. He suggested that we rendezvous'd there to try together and I agreed. I decided to have a last quick look around at Goring before heading off and did a quick circuit of the surrounding bushes and the bridge embankment. It was at the embankment when I stumbled upon the heart quickening sight of a dragonfly crawling up the side of the concrete. A freshly emerged Club-tailed was walking unsteadily up the side of the bridge right by my feet. Get in! What a last-gasp stroke of luck! 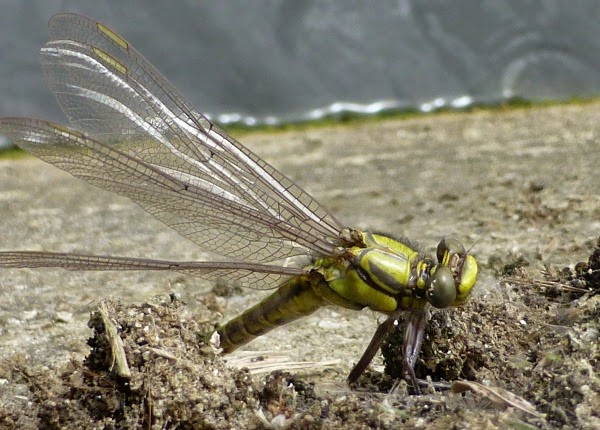 It was looking rather precarious and I was just wondering whether it might need a helping hand when suddenly it flew over my head and landed in a nearby small conifer right next to the bridge. There it sat at just about head height whilst it dried out its wings. I gave Peter a quick call saying that I was going to stay here instead and suggesting that he might like to come over. I don't know how long it takes for a freshly-emerged dragonfly's wings to harden but I imagined that it would be some time so Peter could probably get to see it. 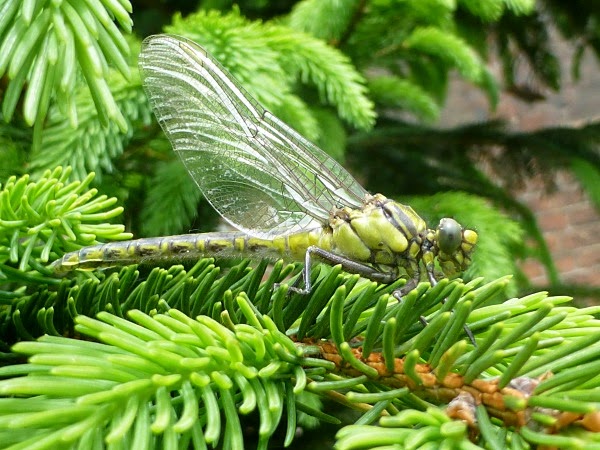 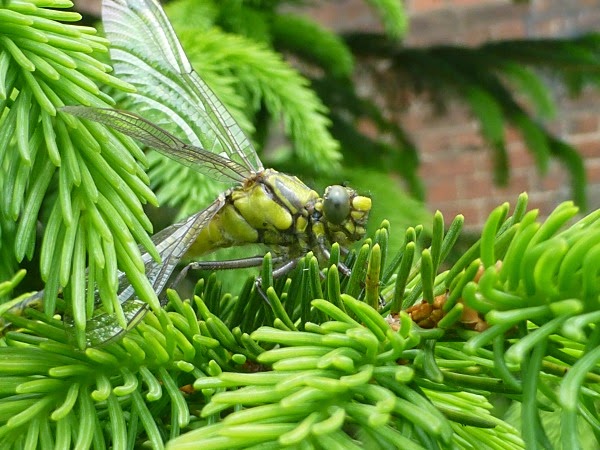 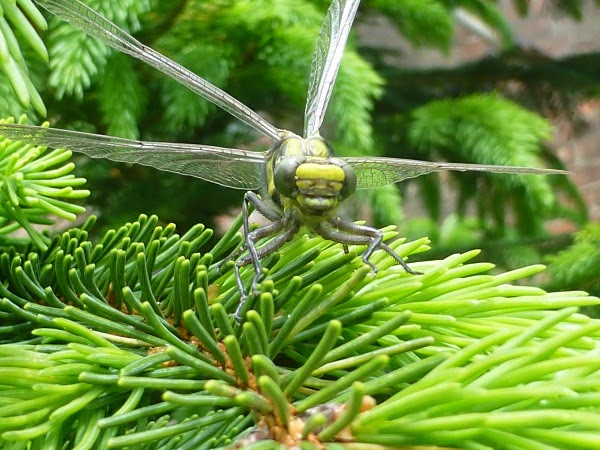 How wrong I was! Five minutes later suddenly it took off and disappeared never to be seen again. I waited around until Peter arrived and meanwhile another hopeful hunter turned up. I explained to Peter exactly where I'd seen it and suggested that the best tactics might be simply to wait to see if any more emerge from by the bridge. However, the weather seemed to be deteriorating and whilst I wished him luck I did wonder how successful he might be as it became cloudier and cooler (sadly I later learnt that he drew a blank). Meanwhile I made my way back to the car and headed home to Oxford for my usual celebratory cup of tea.


I still don't really know whether I was just extremely lucky or whether on a good day at the right time of year it's fairly likely to see several emerge by the bridge. Reading Paul Ritchie's recent blog entry it looks like he prefers the Pangbourne site and that he had good success there last weekend. All I know is that I was extremely happy to have seen my first ever Common Club-tailed at such close quarters.
Posted by Adam Hartley (Gnome) at 19:44