I had rather been assuming that June would be dominated by insects and flowers, seeing as how its traditionally a very quiet month on the birding front. But somehow nationally there seems to be a lot of bird activity. There's been a moderate invasion of Bee Eaters along the coast, a Black Stork or two have been seen, there are White-rumped and Broad-billed Sandpipers in Lincolnshire and the Greater Yellowlegs is still down at Titchfield. All none too shabby! But what really caught my eye was when on Tuesday a Hudsonian Whimbrel came on the information services mid afternoon down in West Sussex at Church Norton. This was within my two hour travel guideline and I rather felt like another outing anyway. I must admit that it doesn't excite me the way some bird species might, after all it's just a Whimbrel without the white rump, but having been recently granted full species status, it would be an opportunity to complete the Hudsonian double in one year as well as a chance to visit the Church Norton/Pagham site which I'd not previously had the opportunity to do.

Thus it was that, having been on show constantly for the rest of the day since its discovery yesterday, when it came up as still present the next morning I decided to go for it. I had a few work things to complete first thing so it wasn't until about 9:30 in the morning that I finally set off, only almost immediately to hit a big traffic jam getting out of Oxford that took at least twenty minutes to clear. Finally I was on the A34 and heading south though yet another jam where that road met up with the M3 meant that what should have taken about two hours ended up taking more like two and a half and thus it was at almost midday that I turned in to Rectory Lane that leads up to the rather small car park by the church at Church Norton. There were cars parked in every small space on the road leading up to the church but I reasoned that by now people would have come and gone already so there might well be some space in the car park itself and so indeed it turned out. I parked up, tooled up and headed along the footpath that lead to the estuary shoreline.


I recognised the area from photos a few years back when a Western Bonelli's had turned up there - at the time I'd hummed and hawed about going for it but in the end had decided not to. I'd just come out onto the shoreline where one could look out over the estuary towards Pagham on the other side when whom should I bump into but Peter Law, just returning from paying homage to the Hudbrel. We had a chat and he said that he was off to Bournemouth to look for Scarce Chasers. I was tempted to join him (after seeing the bird of course) but decided in the end that I ought to get back to do some work this afternoon so I wished him luck and went on my way. I followed the path north along the estuary shoreline to the group of twitchers standing around and scoping the mudflats. After getting directions from someone there I got my scope out and found the five "Whimbrel". From this vantage point they were very distant and it was very hazy but one could make out the much more cinnamon tones of the Hudbrel compared to the darker hues of its European cousins.

The birds were some way off so I decided to head further along the path to get a bit closer. This turned out to be a good idea as I was able to get much closer and what had been a rather hazy blob now resolved itself into proper decent views of the bird. 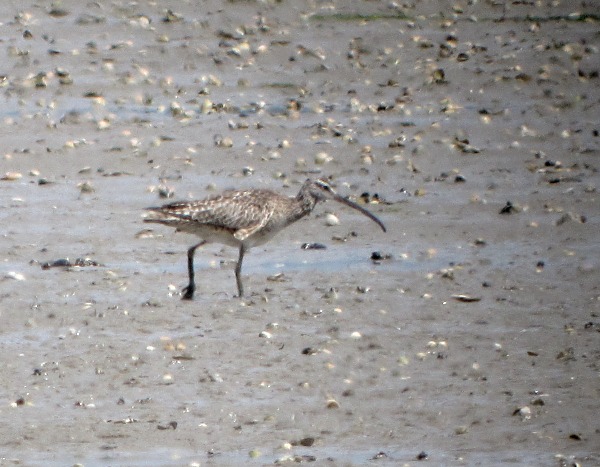 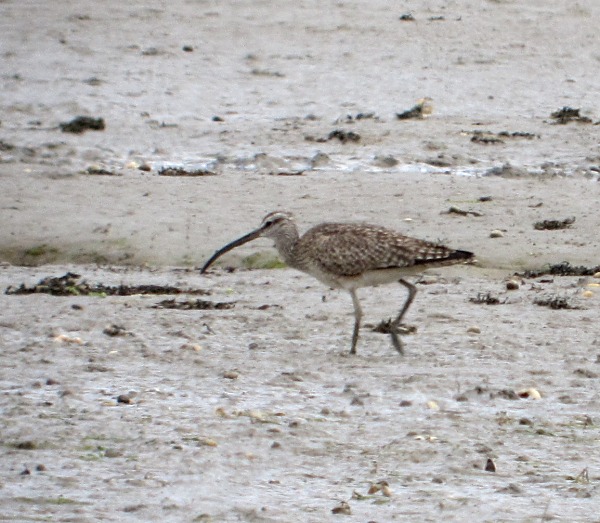 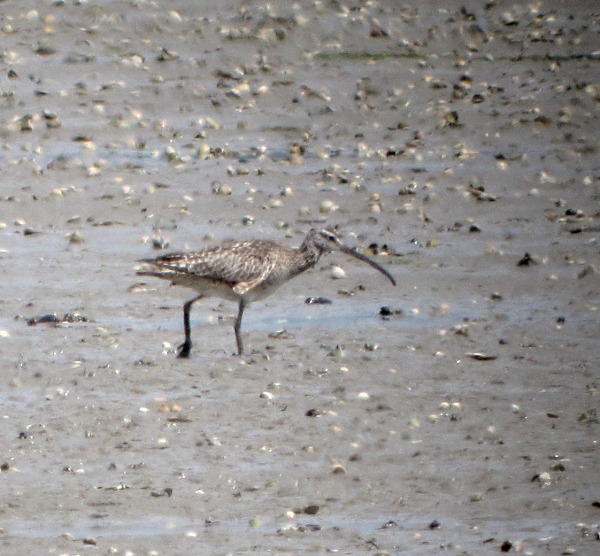 The difference in colouring were most noticeable when the sun was fully out - this brought out the cinnamon tones to the bird and made it very distinguishable. It also seemed to have a slightly longer and leaner jizz to it. It seemed to be very settled and finding plenty of food (mostly crabs from what I could make out). I spent my time alternating between trying to photograph it and just watching it feed. Occasionally it would have a wing stretch so I was able to see the diagnostic dark back and rump that marks this species out from our ones.


Some video footage of the bird


After about an hour a plane flew over rather low and suddenly all five birds were in the air and flying directly away from us. This gave an absolutely perfect view of the back and rumps and the bird really stood out now. As the sun was fully out at this moment it really lit it up, making it look remarkably pale and cinnamony compared to the other birds. They all landed again some distance away down in the main channel. Too far to get decent views and I couldn't really be bothered to slog further around the estuary to try and get closer. After all I'd seen it well and had got great flight views so I was pretty much done. Instead I started to wander back to the car, pausing to take photos of the interesting coastal flora that I came across along the way.


Back at the car I de-tooled, had a bite to eat and then headed back home with Radio 4 to keep me company. Thankfully this time there were no jams and it took only one hour and fifty minutes to get back home again for my celebratory cup of tea. Another successful trip for my third American Mega Shorebird of the year already.
Posted by Adam Hartley (Gnome) at 14:38