After a long and tiring weekend up in deepest darkest Shropshire for a wedding and with a trip scheduled at the end of the week back up north to fetch Daughter 1 down from Durham for the end of her first year at Uni (already??) I wasn't feeling up to any long distance outings this week. Instead my interest was piqued when news broke over the weekend of some Variable Damselflies that had been seen in Abingdon at Barton Field NR. They were first found on the 17th May by Martin Wackenier though it appeared that the record had only just been reported. Over the last few days Richard Lewington and Steve Burch had both managed to find them so they were still around which was encouraging. On Sunday evening I e-mailed both of them to make doubly sure of where exactly they were located - good pre-trip research is worth hours of blundering around on site in my opinion. This was a perfect Monday morning trip: nice and close and with good weather forecast all day so I got in touch with fellow insect-enthusiast Peter Law to see if he'd be interested in meeting me there. He was and so at around 10 a.m. we rendezvous'd on Barton Lane and set off the short distance to the hot spot.


The hot spot turned out to be more of a wet spot - far wetter than we were anticipating and Peter went back to the car to change into his wellies. As I only had my walking boots I decided to soldier on in water that was more than half way up my boots. In the time it took Peter to get to the car and back I managed to find several Variable Damselflies and even managed a few photos though as usual my combination of Point and Shoot and Super-zoom bridge camera meant that all my shots were fairly rubbish. Once Peter returned we managed to find some more to the point where we were keen to see how many we could amass in total. We worked our way along the shady path fringed with Nettles on either side, sifting through the blue jewels of darting Damselflies, homing in on the ante-humeral stripes and looking for the broken blue lines that are diagnostic of our target species. After a thorough search we managed about eight in total with a few Common Blues thrown in as well. 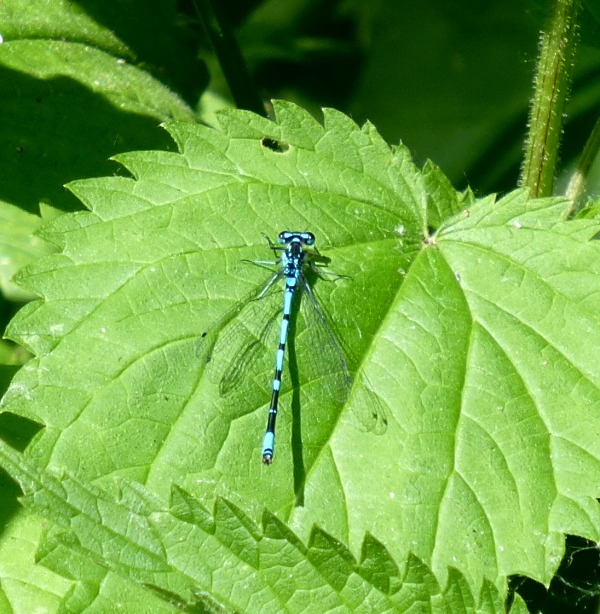 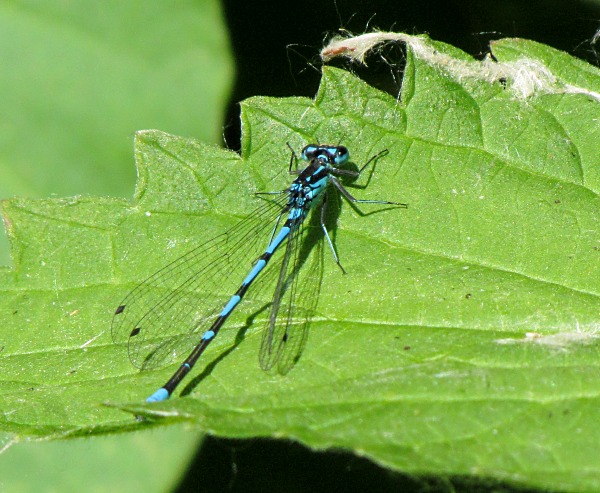 We found that the Variables were located in a very small area between the main path and the small tree-lined lake next to the river. Once we'd got to the lake the species started to change and we were getting more Blue-tailed and Azures and still plenty of Common's but no more Variables. On the lake itself there were several Red-eyed Damsels flitting around and settling on the lilly pads.


After a while we decided to head on to another spot where Mr. Wackenier had reported a White-legged Damselfly about a week ago. En route we managed to find another male Variable along the main path by a small stream. This was a fair distance from the main hot spot so it's possible that they may be more widely spread out than we first though or perhaps there is a second hot spot. Anyway, arriving at the clearing between the trees by the river, where we'd been told the White-legged had been found, we spent some time scouring the area but couldn't turn up any of them. Still it was a lovely morning, a few Banded Demoiselles were flitting around and I saw my first Large Skipper of the year so I was contented enough.


After a while of fruitless searching we had to admit defeat and wandered back to the car. I was very pleased finally to have caught up with the elusive Variable Damselfly. In past years I've spent many fruitless hours on several trips searching another site just north of Oxford with no luck at all so to see them so easily this time was very satisfying. I wonder how long this colony has been there - I've no idea how frequently this site is checked. Anyway, let's hope they become well established there and become a regular species in the county.
Posted by Adam Hartley (Gnome) at 20:07

At least 4 years, but on private land, as an odd individual sighting and just not pinned down. Good to hear they are getting better established or perhaps just more predictable in location for a change. A species that still defies proper understanding of its habitat at a national level.