With the June doldrums now upon us I was very much in insects and flowers mode now. To that end I'd mentally made a note to make a try for some of the butterfly species that I'd yet to see though some of these, such as the Glanville Fritillary, were out rather early in the season. In past years I've often found that by the time I've got around to thinking about them they're already gone. So this year I'd resolved to make a concerted effort to see them. As far as Glanville Fritillary is concerned, effort it very much the operative word here as the only place to see them is on the Isle of Wight which is a bit of a faff, what with catching the ferry and and then driving all the way down to the southern tip of the island. In fact I worked out that it would take the best part of four hours to get from Oxford down to Ventor which is a long time. So when, whilst browsing on the Bug Alert web-site, I came across postings for Glanvilles at a mainland Surrey site I was very interested. After a bit of research I learned that they had been officially reintroduced at Hutchinson's Bank, near Croydon in 2011 though word wasn't put out for a few years to allow time for the colony to establish itself. Now that the word was out it seemed like a much easier option than slogging all the way over to the Isle of Wight so I started to put together a trip. The main consideration was going to be the weather but there was the added complication that my VLW was away this week leaving me to man Fort Gnome on my own. This involved taking our son to and from school so any trip would have to fit around that. Added to that was the complication of my work schedule which was rather full this week. In the end I decided on Thursday as the best option: after a very unsettled start to the week, the weather was forecast to be full-on Scorchio though it would mean that I was missing what was normally a very productive day in the foreign exchange markets. Still, one can't have everything. Thus it was that on Thursday morning I dropped our son off at pre-school club then set off in the Gnome mobile on the rather busy motorway around to the M25 and then Croydon. Because of the traffic what should have taken a little over an hour and a half took more than two hours but I arrived safely at the site, tooled up, grabbed something to eat and set off.


Hutchinson's Bank is a rather strange site, consisting of a network of small fields on some south facing chalkhill habitat, bordered by a road at the bottom and woodland at the top of the hill. There a couple of main paths: one along the bottom by the road and one half way along, a continuation of Farleigh Dean Crescent (where one parks). I'd tried to get an idea of the best places to look on a butterfly forum before hand but in the end I realised that I'd just have to work it out for myself.

I started off on the lower path and walked along until I came to a large fenced off field which looked promising. I went through the gate and walked the length of it slowly but didn't see anything apart from a few Brimstones and some Common Blues. I did another transect back but with the same results. I knew from the forum that some had been seen in this field previously but so far it didn't look very promising so I decided to explore and headed up the hill to the upper path. Here I saw another chap in the distance looking at some shots on the back of his camera - that looked more promising. I headed over to where he was along a wide grassy track with a steep slope on one side and long grass and a hedge on the other. The chap had moved on but just where he'd been standing I came across a Glanville Fritillary basking in the sun on a patch of bare earth. Delighted at having found one I set about taking some photos. 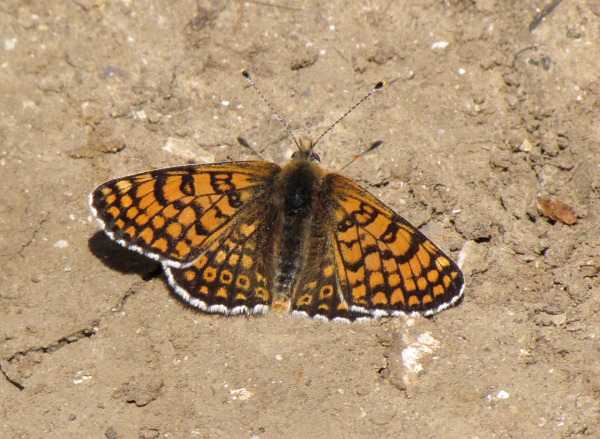 After a little while it flew off and I decided to carry on with my exploration. Just by where I'd been standing I found another target of my visit, namely Greater Yellow Rattle. This is a nationally scarce plant which is only found in a few places. It looks  very similar to Common Yellow Rattle though there were a couple of diagnostics on the flower head, though it was still rather early for them and most of them weren't out. I managed to find one that was out and had the necessary features.


That was both my targets achieved already so anything else was a bonus now. I decided to head on to the end of the path and to explore the next field there. This had a different mix of flowers growing there including Wild Strawberries and loads of common grassland species. I busied myself with taking photos of the ones that I didn't recognise in order to identify them back home.


At the top of the hill I met another chap who was asking about whether I knew the site as he'd been wandering further east but hadn't seen anything. We got chatting and I told him where I'd seen the Glanville earlier and we started to head back to that spot. On the way back I found a nice Green Hairstreak on the path - always a delight to see.

Back at the Glanville spot there were a couple of other people now, taking photos of the butterfly which had come back again. It was very obliging and allowed point-blank approach with the camera. More people gradually arrived until there were at least half a dozen gathered around, taking shots and chatting. I met a couple of people from Hampshire who'd decided that it was still easier to come here than to go to the Isle of Wight.

After a while I wandered off to see what else I could find. I came across a battered Painted Lady and a very dingy Dingy Skipper.


One of the other chaps stationed himself on a small ridge and managed to see several fly-by sightings of Glanvilles bombing along the top of the hedgerow though they never settled. Meanwhile I decided to have another explore of the lower half of the reserve again. I wandered around taking photos of the plants though I didn't manage to see any more butterflies.

Gradually with time marching on I gravitated back to the bottom path and started to head towards the car. Just where the field narrowed down to the path I came across several Small Blues, basking in the sun and flitting around near a muddy puddle.


I was just wandering contentedly along the path towards the car when I came across another Glanville basking in the sun, though this one was rather flighty and wouldn't allow close approach. Still it was a lovely way to round off my visit. 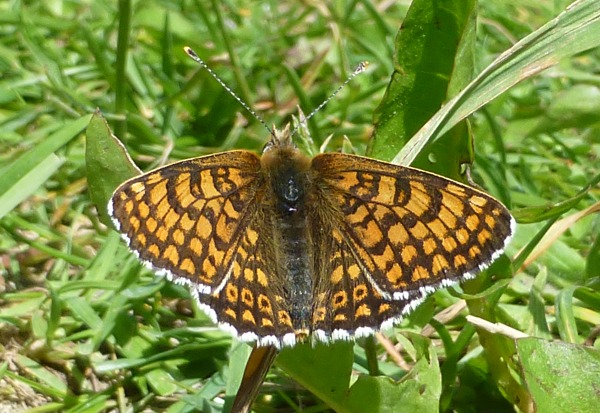 Back at the car I de-tooled and decided to go back the scenic route to the motorway so headed off in the opposite direction to the way the Sat Nav had taken me - I knew that it was possible to go that way. After protesting for a while and asking me to do a U turn, it eventually acquiesced and navigated me along leafy Surrey back-lanes until I got back on the A22 which took me to the M25. My journey back was much faster and I arrived back in good time to pick my son up from school. Then it was back home for my customary celebratory cup of tea and to bask in the warm glow of another successful outing.

eToro is the ultimate forex broker for beginning and advanced traders.