I've had a couple of  relatively local tripettes recently which I thought I'd combine into a single write-up.
Part I
The first one was last week when a singing male Wood Warbler was found at Spiceball Park in Banbury on the day that I was due to take Daughter II back to Swansea University (I'll write that trip up separately in due course). Fortunately this wasn't a county tick for me so I could watch from afar as things unfolded during the day. This species is seen annually in the county, often as a singing male found by a single observer as it passes through relatively quickly. Over the last few years however there have been more birds which have lingered long enough for them to be twitchable so it's definitely not the county rarity that it once was. Still it's a nice bird to see and given the dearth of decent local birds recently I did decide that should it stay a second day then I would pop over to take a look. The bird duly obliged and I kept true to my word, arriving at around 9 a.m. to park up in the familiar car park that I normally associate with visits to Grimsbury Reservoir just to the north of the park. In fact I'd not actually visited the park itself before and was pleasantly surprised to find a nice wildlife-friendly area with a river running through it and areas of grass left long to encourage wild flowers etc. The only fly in the ointment was the proximity to the motorway and the constant roar of traffic added a rather undesirable backtrack to the location. Anyway, I followed the path southwards along the river until I came to the first footbridge where I crossed over and entered the small copse with a wood-chip trail running through the centre of it.


There I met a couple of birders who said that the bird itself had not actually been seen or heard during the twenty or so minutes that they'd been there though as I'd met some birders back at the car park who'd seen it well I wasn't too worried. I wandered around in the general area and after about 10 minutes I heard it singing well enough to home in on the general area where it was though I couldn't actually see it before it went quiet again. Another ten minutes passed before someone else spotted it up in the canopy and after that we were able to follow its rather sedate progress through the tree tops. Whilst Wood Warblers are superficially similar to Willow Warblers and Chiffchaffs, when studied at close quarters I was really struck by how different the shape was of this species. It was larger and rather rotund in appearance and it's very long primary projection meant that the tail looked short and stunted. The lemon yellow upper breast and supercilium were also quite distinctive compared to its commoner leaf warbler cousins. Altogether it was a very distinctive and smart bird.

I watched it for some twenty minutes before it was lost to view and I decided that it was time to head home. I had a brief look at the flora on offer as I headed back but there was nothing of particular note, not that it stopped me taking a few photos.


On bank holiday Monday, I was just getting my head together at the start of the day when news broke on RBA of a Kentish Plover in Buckinghamshire. Now, regular readers will know that this is a bogey bird for me and  it was only recently that I'd dipped the bird at Pennington Marshes.The problem with this species is that it often doesn't linger very long. Time and time again one is found first thing in the morning only for it to move on a few hours later. Sometimes they can stay longer and indeed there have been a couple already this year in what seems like a good year for them, with one in Norfolk and another in Cornwall which both stayed several days. This is however very much against the norm and I realised that my best chance of seeing one was going to be if an inland bird turned up somewhere fairly nearby which I could get to relatively quickly. So when this news came up on the pager it was all systems go. I quickly got ready and within twenty minutes I was out the door and heading off towards Bucks in the Gnome-mobile. The bird was reported at Pitstone Reservoir which I'd not previously visited though I'd been to Wilstone Reservoir before and I knew that it was in that same general area. I'd looked up where it was before leaving and had programmed it into my Sat Nav and with the ETA showing as one hour after my departure I nervously negotiated the relatively slow roads that lead to Aylesbury and then onwards towards Tring.


I arrived at what was obviously the right place judging by the numerous cars all parked up everywhere along the verge. I added mine to the collection, quickly got tooled up and hurried off along the path. I soon met some birders coming the other way who confirmed the bird's continued presence and told me that it was no more than a couple of hundred yards along the woodland path. I soon covered the distance where a quick hop over the fence revealed at least two dozen birders standing on a trampled area of nettles and looking down from what turned out to be a cliff-like vantage point towards the quarry lake and a large area of mud beyond that. 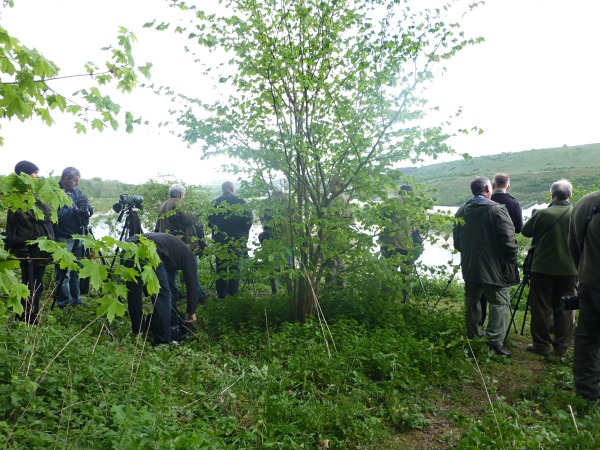 The bird was surprisingly difficult to locate and in the end I resorted to a quick peep through someone's scope to calm my nerves and secure the tick. After that I was able to find the bird in my own scope at my leisure myself and to set about taking some digiscoped shots though at this distance they were never going to be more than record shots. 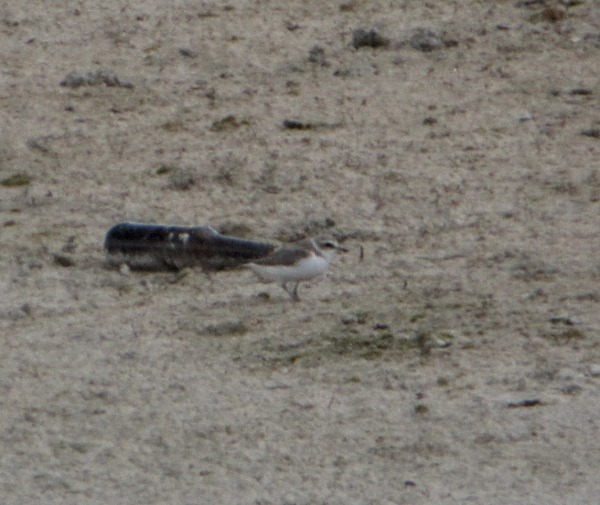 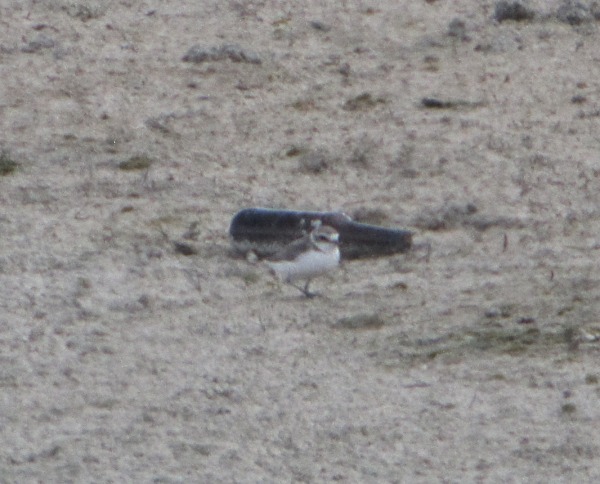 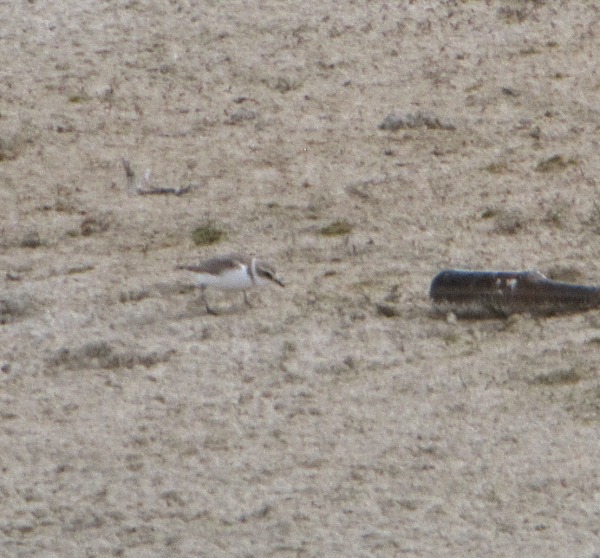 The bird was in a large open area of sand which it wandered over freely, periodically picking off some insect or other. There was also a Little Ringed Plover which occasionally would pick a fight with the Kentish though the latter never went far and just found a different area of sand to feed on. Most of the birders present there were locals judging by the main topic of conversation, namely which side of the Bucks, Herts county boundary the bird was on: apparently the boundary line went through the middle of the area where it was located so it wasn't at all easy to tell, though I personally didn't care either way.


As my VLW and I had discussed an outing that afternoon I didn't linger long and having secured my tick and taken a few photos, within about twenty five minutes of first arriving I was heading back to the car and then retracing my way back home to Oxford where I arrived at a little after 11 a.m. As a point of interest, just over three hours after first having been reported the bird flew off not to be seen again, so once more confirming the typically hard-to-twitch nature of this species. It had well and truly been a Blitzkrieg twitch but thanks to my quick actions I'd finally got to see a Kentish Plover.