An Elegant Tern of Events

Anyone who is remotely connected with the UK twitching scene will know of the discovery of an Elegant Tern down in West Sussex recently. It was first discovered on Wednesday last week at Hayling Island in Hants. though it only stayed for about an hour before flying off. "That's was that" we all thought, but we were wrong! Two days later it was seen again off Hayling Island though once again it didn't linger. On Saturday morning however, it was relocated at Church Norton in West Sussex, loitering at the local Tern colony there and this time it hung around. In fact in all probability this is where it had been all along and it had been seen at Hayling on one of its periodic feeding trips. Through most of Saturday and Sunday it was reported on RBA regularly though it did seem to go missing for up to three hours at a time when it went off on a feeding trip. Now the thing about Elegant Terns, which should normally be on the west coast of the American continent, is that they hybridise with various other species so that whilst various good candidates have been seen in this country over the years, it's always very difficult to know if they're genuine Elegants rather than some mongrel hybrid. However, this particular bird had been ringed in France where it had been loitering earlier on in the year and what's more it had been DNA tested and confirmed to be 100% pure Elegant Tern. This bird basically came with its own certificate of authenticity!


Of course I was stuck at home with our son L as my VLW (as I reported in my previous posting) was away so there was no possibility of my making a trip to see it. However, with it still being around on Sunday evening I made tentative plans to go and see it the next day. It seemed to me that unless one was prepared to be there at first light (which was pretty early at this time of year and not really my thing) then there was always the possibility of it being out feeding on arrival so I decided to head over fairly promptly as long as there was news of it still being present, aiming to arrive around mid morning and being prepared if necessary to hang around for a while if it was out.


This was the plan and so it was that some time after 8 a.m. the next day I set off, fighting my way through the maelstrom of Oxford commuters before heading south along the A34 on the familiar route towards Church Norton. I'd visited this location once before for the Hudsonian Whimbrel so it was a fairly straight-forward trip right up until the end where I had to make a decision about where to park. RBA were giving the RSPB visitor centre as the official location but that would involve a long old slog around the estuary to the twitch location so in the end I gambled on being able to find somewhere to park at Church Norton itself. There were some places along the lane towards then end but I decided to stick it out until the very end of the road. I found the car park predictably jam packed but managed to squeeze the Gnome mobile into a dodgy space in front of a barrier gate - result! I quickly got my stuff together and hurried along the familiar path to the estuary where I was greeted with a line of birders who all seemed to be looking at something rather intently.


I hurried up to find that the bird was indeed on show on the mud flats in front of us so I quickly got set up and started to take some video.


The Elegant Turn having a wash and brush up


I then decided to take a few still photos though at that point a Sandwich Tern plonked itself down right in front of the star of the show which was somewhat annoying! 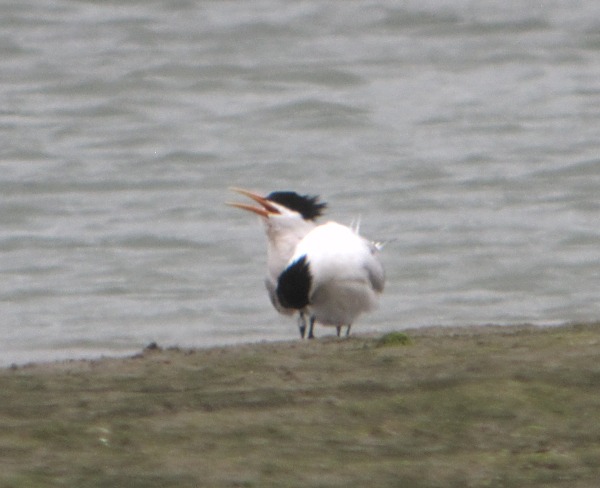 After about five or so minutes of watching it, it flew up, made a circuit and then landed right on the top of Tern Island out of sight in amongst the rather tall grasses there. On enquiry of my birding neighbours in the twitch line it turned out that this had actually been the best view of the morning and that most of the time it stayed in its preferred hidden spot on top of the island, only making occasional sorties out around the harbour before returning to the same spot. This had been the first time that day that it had come out into the open so I'd been extremely lucky to have arrived when I did. In order to wind down after all that excitement I had a general scan around which revealed a surprisingly large number of Med Gulls, plus Sandwich, Common and Little Terns, all which were breeding on the island but there was little else of note. After this great showing of the star attraction there was a modest exodus from some of the twitchers who'd been there a while and had finally got a decent view so I took advantage of this to head back to the car park and park up in a more legitimate spot as well as to get something to eat.


When I returned back to the estuary I debated whether to go back in line to wait for another fly-by or to have a bit of a botanical explore. To be honest it was no contest really as I was keen to rummage around on the shingle beach by the estuary mouth. So I headed off towards the beach and soon came across a wonderful area of shingle which was surprisingly packed with various plants of all sorts of different species. As this wasn't a habitat that I'd explored much in the past I had a good wander around, taking snaps of anything of interest though sadly I later realised that I'd left the camera exposure two notches down so everything has come out a bit weird.


Over towards the estuary mouth I found a couple of birders camped out surveying Tern Island from this higher vantage point though even here they couldn't see the bird whilst it was ensconced in its hiding place. Whilst I was chatting to them the bird took flight and flew all the way out to sea and looked set to head off into the distance on a feeding trip until abruptly it turned around again and headed back to the estuary and back to its favoured spot.

I decided to head back to the main viewing area where I spent a bit of time watching the island and was treated to a couple more fly-out sorties. At this point I'd felt that I'd seen the bird well enough and my thoughts started to turn to home so I wandered back to the car, fired up the Gnome mobile and headed off. I was feeling quite tired now after all the excitement was over so I had to concentrate hard on my driving. Thankfully the traffic was fairly light and I arrived home at around 2 p.m. for my usual celebratory cup of tea.
Posted by Adam Hartley (Gnome) at 19:26