My VLW had been away all last week, taking her turn at looking after her now rather elderly mother and this had meant our son L and I had been left to fend for ourselves all week. We enjoyed a somewhat slovenly bachelor-like existence all week, eating less than healthily and not doing much exercise though the lack of excursions was also partly down to the weather which was very unsettled all week. Finally, come the weekend, I'd had enough and needed to get out so I proposed a walk to the Sydlings Copse, a BBOWT reserve that I'd only visited for the first time earlier this year. Still, it wasn't too far away, there was a nice straight-forward walk across fields to get to it and there was a variety of different habitats to explore and L seemed amenable enough so off we went.

Whereas last time I'd dawdled in the farm fields, looking at all the arable weeds, this time with L in tow I didn't want to get him bored right at the start of the walk so we yomped across the two fields to the turn off for the copse. Once inside we headed over to the open grassland area where the Early Purple Orchids had been on my last visit. Entering the grassy area I was immediately struck by the contrast with the previous visit. Whilst there had been some wild flowers about then, this time there was a veritable riot of colour with flowers everywhere. It was all the usual stuff with Yellow Rattle, Salad Burnett, Rough Hawkbit, various Knapweeds and Field Scabious etc. but it was just great to see it all there in such profusion. In years gone by I'd have been rather dismissive of reserves such as this as they didn't seem to have much in the way of bird action, but now with my expanded interests I'm really coming to appreciate the habitats and flora.


Over in the second, larger field area I immediately came upon a clump of (Chalk) Fragrant Orchids which I really wasn't expecting. There was no mention of this species on the BBOWT reserve website and in my general orchid enquiries from other locals I'd not been told about them. Not that I was complaining as this saved me a much longer excursion to catch up this species which was very much on my "hit-list" for this year. There were about twenty spikes of this delightful orchid all in one small area. 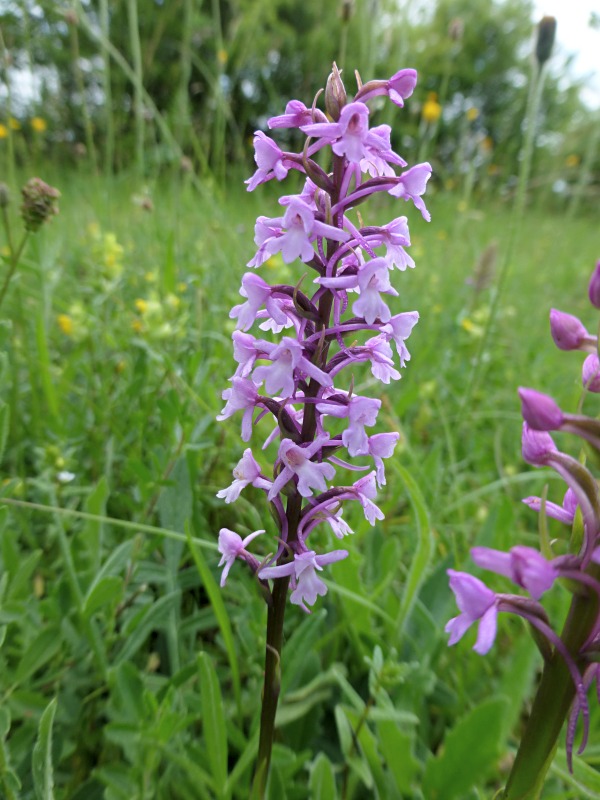 What I had been expecting at this site were Bee Orchids but after looking over in the area where I was expecting them I couldn't find them so I gave my local go-to orchid expert Wayne a quick call only to be told that there weren't any this year. Oh well, at least that meant I wasn't just being useless in not being able to find them! He did tell me that there was a Lizard Orchid flowering around there and gave me instructions on where to look though it did take a second call before I managed to home in on what was a very well-hidden flower. It was only partially out but still nice to see.


I spent some time taking photos of all the abundance of wild flowers until with L getting restless we headed back across the fields and then home for a well-earned cup of tea.

Lizard orchid?! No way! I know Sydling's Copse quite well but last I heard it hadn't been seen in years. It must be in full flower now after all this heat. Where about is it?