My apologies for the title of this post, but quite frankly it had to be done. After my resolve to return to birding now that autumn is upon us, the most obvious target in the county was the unprecedented number of juvenile Shags that had turned up at Farmoor reservoir last week. The highest total there was 13 at the start of the week and though numbers had been decreasing ever since, still there were quite a few on offer by Thursday when I decided to pay a visit (since my work was so slow).


I arrived mid morning and decided to take things at quite a leisurely pace. At first I could only see Cormorants on the floating pontoons on Farmoor 1 so I set off along the causeway with a single Dunlin and the obligatory Yellow-legged Gull on a buoy for my troubles. However, at the far end of the causeway by a small outlet there was a single juvenile Shag, completely unperturbed by the close proximity of myself and one other photographer.


I decided to wander over towards the "bus stop" area, as I'd read that some of the Shags liked to hang out at the pontoon there. On the way I came across a pair of Egyptian Geese and an obliging Wheatear on a fence. There were Chiffies absolutely everywhere in the hedgerows and trees, calling constantly. 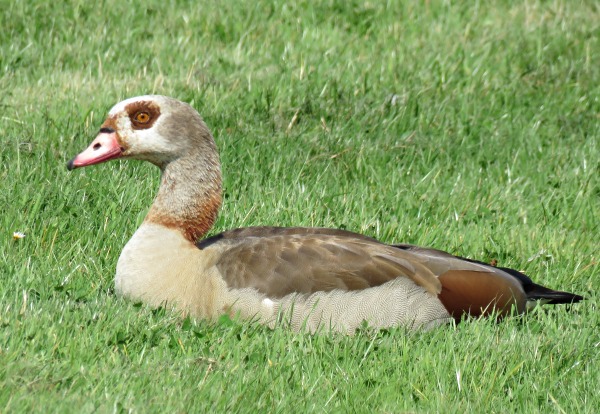 I was about half way to the pontoon (about in the "Red-necked Grebe" area) when I spotted a gull on the shoreline. Now I'd been paying close attention to the gulls, picking out the Yellow-legged from the Herrings etc. but this one caught my eye though unfortunately it flew out about forty yard as I approached so I took some video. To my eye it looked very much like a juvenile Caspian Gull with the classic long parallel-sided beak, not at all like the relatively brutish Yellow-leggeds.

Fortunately, when I got back home and posted it for Ian Lewington to take a look at, he agreed with me. I was most chuffed as it was my first juvenile Caspian that I'd seen. It quite made my day!


Over at the pontoon there were three more Shaglets, looking very petite compared to the hulking Cormorants though they were all rather distant.


I then retraced my steps and headed back along the causeway where there was nothing new and back towards the car par where I found one more Shag sitting on a pontoon outside the café and looking very cute.

So, my first birding outing in a while and one which I thoroughly enjoyed. It's rather telling of course that whilst the various coastal areas are enjoying Pectoral Sandpipers and all sorts of hot drift migrant action, here in Oxon we're left with juvenile Shags to get the juices going. Still, beggars can't be choosers.