As regular readers will know, I've been trying to catch up with some of the rarer Odonata within the county. With Club-tailed Dragonfly and Variable Damselfly already under my belt my attention had now turned to reports of a colony of White-legged Damselflies that had been found in the north of the county by Gareth Blockley on his local patch at Grimsbury Reservoir in Banbury.  I've been trying for a few years now to see this species, making occasional trips to the Thames in summer months where they are supposed to be found but so far to no avail. So when Gareth's find was backed up by Peter Law who managed to find ten of them I knew that a trip to see them was in order.


This week had been rather busy for me at the start of the week and I wasn't able to head out on my usual Monday trip, partly of course because of problems with the Gnome mobile from the trip up to Durham which I reported last time. Still these were sorted out on Tuesday where it turned out to be a faulty soot filter. For some reason the computer seems to think that with a faulty soot filter you shouldn't be able to drive fast at all so "helpfully" limits your speed. Anyway, that was all sorted and thankfully it hadn't cost too much to put right. Come Thursday and things had slowed down at work, the markets were completely dead and the sun was shining. What more excuse did I need? I was soon heading up the M40 towards Banbury.


I'd been to Grimsbury Reservoir a few times, to see the Willow Tits there - the last "stronghold" in the county though there's only one or two birds present. I wandered along the path by the reservoir enjoying the summer sunshine, looking at all the plants and listening to the birds. To get to the Damsel hot-spot I went under the railway bridge by the river and then followed the path alongside the Cherwell through a wonderfully overgrown Meadow towards the roaring traffic of the M40 which crossed over the river at the end of the field. Peter Law had found a few White-legged Damsels in the Meadow itself so I kept a keen look out though I only saw one possible that flew away too quickly for me to be sure. There were loads of birds singing here with Bullfinches, Reed Buntings, Whitethroat, Lesser Whitethroat, Blackcap, Garden Warbler, Chiffchaff and Sedge Warbler all heard singing away. I couldn't help but contrast this with Burgess Field on my patch at Port Meadow which is all too quiet now.

In the far corner I started to look more intently though for a while I couldn't see any Damsels at all. Then I found a Common Blue and finally a nice male White-legged. After that I found quite a few more - they all seemed concentrated in one area very close to the end of the field. There was also a pair of Beautiful Demoiselles in amongst the smattering of more common Bandeds. I busied myself with taking lots of snaps as well as looking out for any flowers that I didn't recognise. 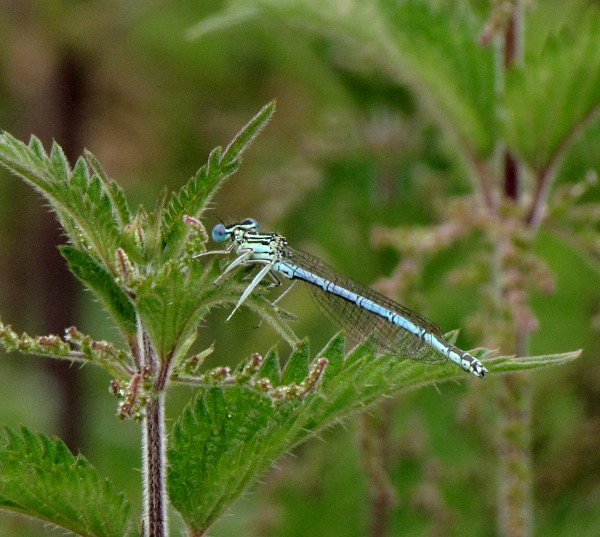 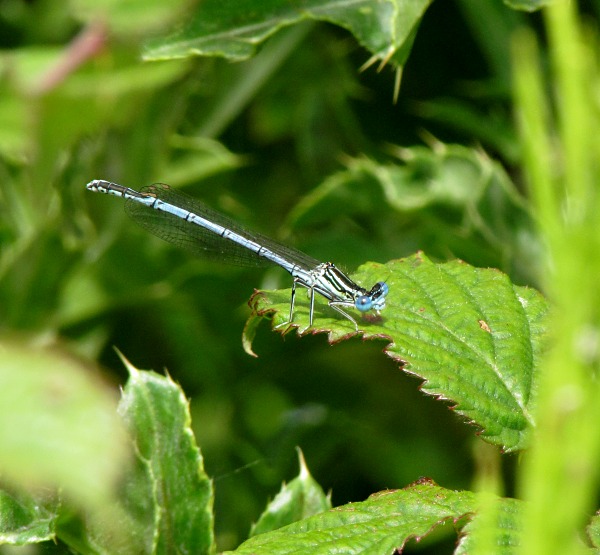 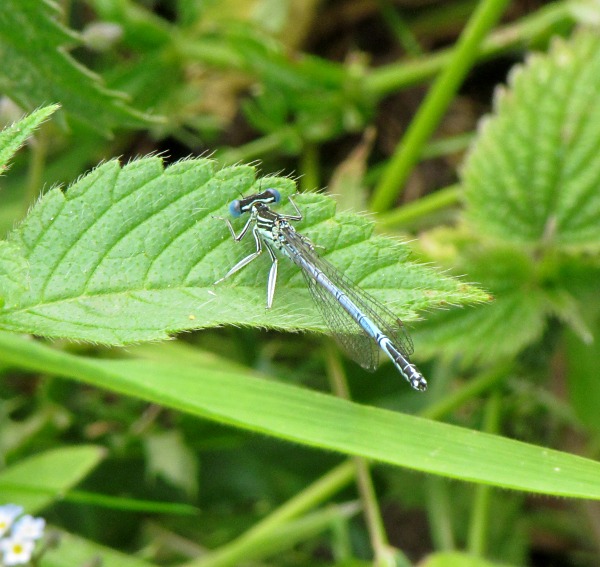 I used to suffer from hay fever though over the years I've more or less grown out of it. However I found myself sneezing away like an idiot whilst I was wandering about the tall vegetation. It wasn't really surprising, there were so many grasses about in full flower and it was June after all. As a former hypnotherapist I find that I can often turn down the symptoms through positive thinking but this time it wasn't working so I had to do full-on hypno zap to myself in the field. Two minutes later and I completely stopped sneezing. Despite using it for years on clients it always amazes me how well hypnosis can work. So fortified I carried on with my searching in the hot sunshine gradually winkling out some more White-leggeds.

In all I counted three males and six female White-legged Damsels during my time there, including one mating pair which was a nice total. After a while I felt that I'd covered all the ground in that area thoroughly and so started to head back to the car. This time I was lucky enough to find another male on the way back to add to the tally.


On the way back I noticed the they were busy cutting the grass around the reservoir. It was a real shame as there were all these wonderful plants and flowers growing there in the long grass that were just being mowed down for no reason at all. Back near the car park I came across a newly mowed area that I had just walked through a couple of hours earlier, all the flowers now hacked down senselessly. Quite why people feel the need to sanitise these places is beyond me - it's almost as if they want to purge all the nature from the area if they can. Anyway, it was back to the car and home along the M40 noticing with relief that I'd managed to miss the huge traffic jam that was building up the other way on the motorway. I arrived back at Casa Gnome in time for lunch very pleased with my bijou tripette and that at last I'd got to see some White-legged Damselflies.

Thanks for your great pics and story. I have also seen the White-legged damselfly a little further up the Cherwell, great to find them well established so close to Banbury. BOS and others are hoping to improve the management of this area for wildlife in the long term, you never know, we might be able to influence the mowing regime!
Best wishes Mike Pollard

eToro is the ultimate forex trading platform for newbie and established traders.