There's a lot to cram in to the summer season if one is serious about one's butterflies and dragonflies! Whilst birds are my main thing and I don't personally have a great inclination to go around seeing the same insects year in year out, I'm still keen to see the various species at least once. This means that at some point I was going to have to go to somewhere like Whixmall Moss, a floating peat bog habitat on the Welsh Borders, in order to catch up with acidic pool specialists like White-faced Darter and also the Large Heath butterfly. This was by far the nearest location to Oxford for these species which otherwise are to be found much further north. A couple of weeks ago on the Variable Damselfly trip, whilst Peter Law and I were discussing places we were wanting to visit we found a common interest in visiting this reserve and so a plan had been hatched. When Peter suggested a Monday visit I was happy to accept (this being the least productive work day for me) so it was that around 8 a.m. we rendezvous'd under the A34 flyover by the the Pear Tree Park & Ride and set off in the Gnome mobile for our destination some two and half hours away. It's always nice to be heading away from Oxford at this time in the morning whilst huge jams are piling up going the other way. The M42 was it's usual busy self but I treated myself to the M6 Toll as usual (one of my driving indulgences) and after a hectic one-junction hop on the M6 we were onto the relative quiet of the A5 and A41. As we sped along Peter would fret about the weather from time to time which, whilst still bright, was rather cloudy and not ideal for butterfly hunting. The journey was uneventful until right at the end when we got stuck behind a herd of cows and then had to decide whether the Sat Nav knew what she was talking about when she suggested an unmarked track heading along the side of the canal. We took a punt and it turned out that she was right as we soon found ourselves parking up at Roundthorn Bridge, one of the two ways into the reserve. Fortunately the weather appeared to be on our side and the cloud was lifting as we arrived with warm bright conditions and even patches of clear blue sky. According to Peter poor weather can often be a problem at this reserve which seems to attract the cloud so we were lucky today. As we got ready a Sedge Warbler flitted about in the ditch opposite us.


As far as reserve amenities were concerned it was fairly minimalist with there being nothing more than a layby and a few maps to help you. To be honest the maps were fairly useless as well as they didn't seem to include half the tracks that criss-crossed the reserve. We wandered along the path through a grove of Silver Birch where I found a clump of Climbing Corydalis nestled in amongst the bracken - a species that one doesn't tend to find back in Oxon.

Then suddenly we were out in the reserve proper. It's interesting because at first sight it just looked like some open heathland though with fewer scrubby bushes than one might expect. It was only when one looked more closely that one could see that between the paths it was in many places made up of bogs populated by Sphagnum Moss and very treacherous underfoot. This was the acid floating peak bog habitat that makes Whixall Moss unique.

It wasn't long before we found our first target when a butterfly flitted by with a rather floppy but surprisingly fast flight. Peter immediately recognised it as one of our target species, the Large Heath butterfly, a new species for me. After I got my eye in I found that it was relatively straight-forward to differentiate them from the Meadow Browns and Ringlets with the colouring of lower underwing giving it a more pale sandy impression in flight and of course when viewed closely one could often pick out the large spots on the underwing as well. I soon learnt though that whilst this butterfly was very numerous it was also very hard to pin down. They rarely seemed to settle and when they did so they were easily spooked so photos were hard to come by.


Please at having at least seen our first target so quickly we wandered on up the track where we soon discovered a small pond on our right. This turned out to be occupied by several bully-boy Four-spotted Chasers who were harassing a couple of much smaller White-faced Darters. So that was both our targets achieved pretty quickly - very satisfying!

Now it was just a question of getting some photos. We spent a while trying to photograph them though there were on the far side of the pool so it wasn't so easy. All the while Large Heaths flitted about - tantalisingly close but never settling.

After a while we decided to try to find the big pool that Peter remembered from last time though he wasn't sure exactly where it was. Having done my usual pre-trip research, I'd come to the conclusion from the map that it was located to the north west of the reserve not far from where we were, where the large "White-faced Darter" logo was on the map. A reasonable enough conclusion you'd think though Peter wasn't so sure. In the end he humoured me and we wandered down a track which was clearly heading away from the right habitat: you could tell because the Large Heaths were being replaced with Meadow Browns, Ringlets and Speckled Woods. We didn't find the pool though we did come across another small one, in the typical rectangular shape for the reserve since they were formed from old peat cutting trenches. This one looked great but had little more that a couple of Four-spots and a few damselflies. We did however find a nice little patch of heather where we managed at last to score a settled and nicely posing Large Heath.


Having realised that the map was useless I let Peter get on with the task of finding the other pool which he duly did. This was still small though certainly larger than the one's we'd seen so far and had several Four-spots but also several White-faced Darters as well. What's more there were some nice boardwalks around the edge on which the Darters would occasionally settle, offering some better photographic opportunities. We both set about taking some photos. 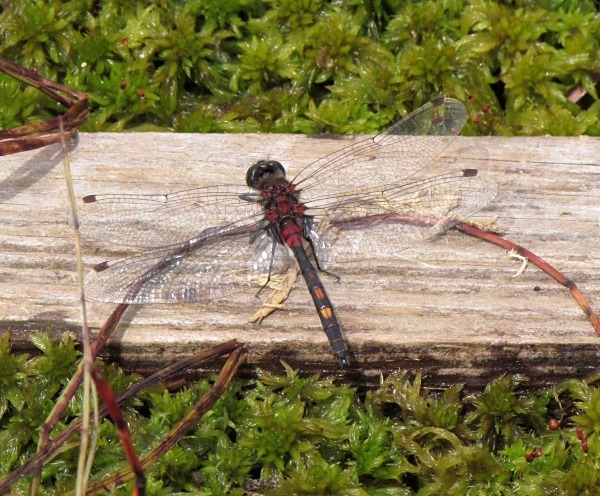 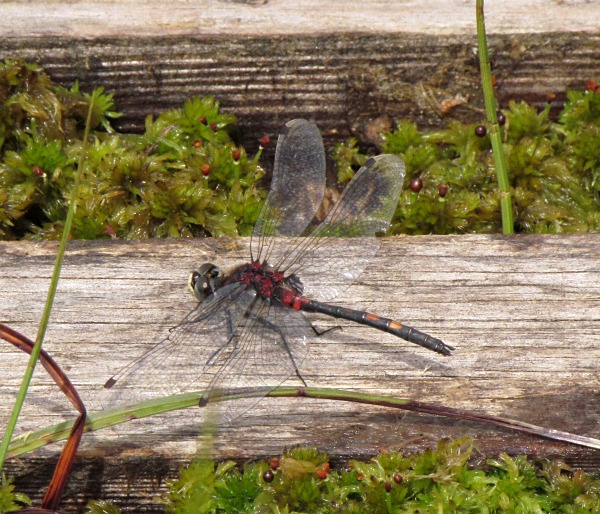 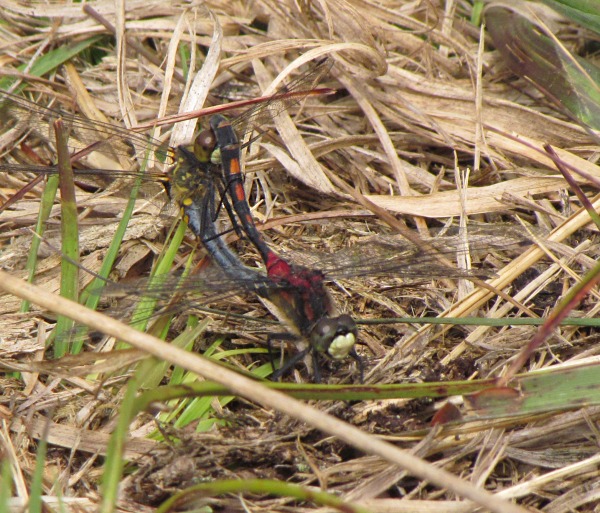 After a while I'd had my fill though Peter seemed keen on taking more shots. Given the poor quality of my camera for dragonflies (as you can see from above) I knew that there wasn't much point in trying too hard so I wandered off to a much larger looking pond that we'd come across on the way to this one. The reason for this was that I was quite keen to see if I could find a bonus Common Hawker, not one of the key species here but it was the sort of acid moorland habitat in which they could be found. The large lake had rather treacherous hidden mossy bits around the edge so I soon learnt to keep to the main path and scan with my bins. The main inhabitants seemed to be blue Damselflies though there were one or two Four-spotted Chasers and some Blue-tailed Skimmers to be seen but certainly no Hawkers. I wandered further along the path and came across a small yellow Darter, which turned out to be a female Black Darter. 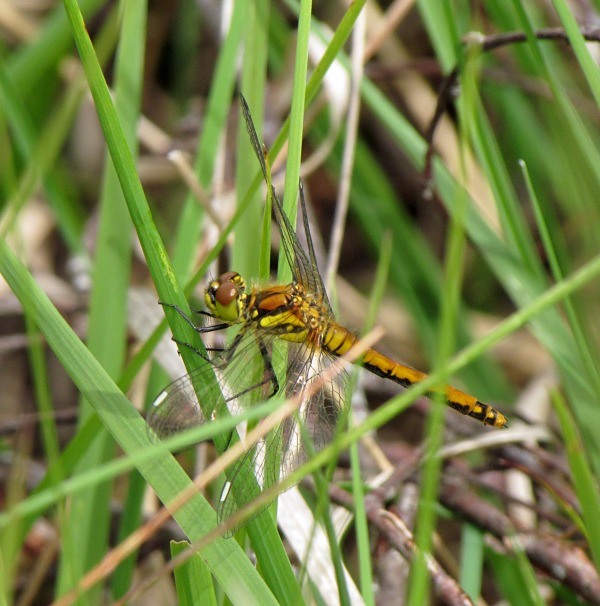 Pleased with this success I wandered on and found some more peat cutting trench pools with mostly just Four-spotted Chasers in though I did find one White-faced Darter. I wandered about contentedly, listening to the calling Curlews and Reed Buntings. A Teal flew in and landed on the large pool and I spotted a young Canada Goose lurking at the back. I was starting to feel peckish now having foolishly left my lunch back in the car so I started to head back to Peter whom I met coming to find me. We both agreed that we'd more or less had our fill so we wandered back, stopping again at both pools briefly for some final snaps. We managed to score another settled Large Heath on the way back though it was typically obscured.


We ambled slowly and contently back to the car, with me taking shots of flowers and Peter of butterflies as we went. Back at the car we de-tooled and I ate my lunch and had a welcome cup of tea from the flask.


By now it was mid afternoon and it was time to head home. However, I'd noticed on RBA that the long-staying Melodius Warbler near Hampton-in-Arden was still about and as it was just a five minute diversion from our route I suggested that we might wish to pop in to pay our respects. Peter was agreeable so that's what we did. The journey back was fine though I soon noticed that I'd left the boot wide open whilst driving off (what am I like?) and I also managed to get lost on the back roads by the reserve and had to resort to the Sat Nav to get us back on the A41 though after that it was plain sailing. After the M6 Toll I put the Sat Nav back on and she guided us flawlessly on the few minutes it took to arrive at the turn-off for the Warbler. This was opposite the entrance to Marsh Lane, where I'd come a few years ago for the Dusky Warbler but this time we needed to head off in the opposite direction along a farm track. It just took five minutes to walk along in what by now had become quite hot weather. Skylarks were singing overhead and there were a few farmland flowers to take snaps of en route.


As we approached the location we could hear the warbler singing away and we arrived to find one other person there who had it in his scope. It was doing a circuit, singing in its favourite tree for a few minutes and then flitting off somewhere else for a few minutes before coming back. We had pretty good views almost immediately and I even managed some snaps with my super-zoom camera. 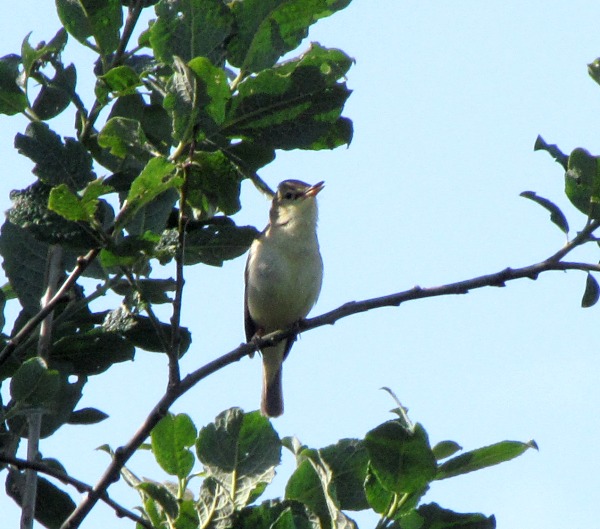 Pleased at having seen the bird so well and with time marching on we didn't hang around but soon headed to car, stopping only to photograph a rather battered Painted Lady on the way back


Then it was back into the car and back home to Oxford where I dropped Peter off at the Park & Ride. I arrived back into the bosom of my family home shortly after 6 pm to find that Daughter 1 had made us all some yummy Gumbo, her signature dish, which we all tucked in to whilst watching Wimbledon on the telly. It had been a very productive day, connecting with all our target species very quickly and the weather and traffic had both been kind to us. What more could you want?
Posted by Adam Hartley (Gnome) at 19:38