This Sunday just gone I'd got up with no real plans. My VLW was going off to play tennis as usual and I lounged about in bed nursing my second cup of tea and wondering what to do with the day. At shortly after 9 a.m. news broke on RBA of a Wryneck at Lark Hill near Wantage in Oxfordshire. Now Wryneck at Lark Hill had rather bitter memories for me: back when I still needed it for the county one had turned up there on a Saturday when I was out all day on a family trip. This bird had cooperated enough to provide quite a few of the lower county listers with their county tick though I could only follow the various county updates throughout the day from a far through gritted teeth. Fortunately I was able to get this difficult county species on my county list a little while later with one at Otmoor so there were no lasting hard feelings about it. Still, with nothing else to do that morning, I quite fancied the idea of trying to get what would be only my second ever county Wryneck so after a hurried breakfast off I set.

Lark Hill is a deceptively ordinary bit of downland habit with just a single chalk track heading southwards between rolling fields of crops which at the moment were just stubble. There is very little cover apart from a few Hawthorns and Elders along the track and a couple of side hedgerows that mark the field boundaries. This uninspiring area is the patch of LB in Oxon and despite its sparseness over the years he has found three Wrynecks in this area - this would be the fourth. Having previously spent a fruitless Sunday looking for the Wryneck that I'd missed the last time round I knew of a sneaky little parking spot quite close by and was soon tooled up and yomping across the fields towards the area where it had been reported. There on the main track I found SJ, PJ and SB all peering back towards me down in a dip along the main track. I worked my way around to join them to get the gen on the bird. It turned out that it had been SJ and PJ (so not LB) who had found the bird this time: in a small clump of half a dozen trees along the track just as it started to slope down the hill. They had been seeing it every 5 or 10 minutes for a couple of seconds at a time as it crossed the path. However things had started to go a bit quiet by the time SB had turned up and he'd only seen it once.

There was no further sign of the bird in the next half an hour. JC turned up and the two original finders left to see what else they could find. We moved around to view from the top of the hill again and were joined by another birder and his son. From my own personal experience having an impatient child in tow is never going to work out especially when staking out a skulking Wryneck. After half an hour after they had just left I spotted something drop down onto the track. From my bins I could see the head of the Wryneck in amongst the grass. I called it out and SB got onto it though JC couldn't see it. We gesticulated to the departed father and son and they hurried back. A couple of minutes later and it turned up again in the same spot though once again only SB and myself saw it. And that was it for quite a while. SB and the father and son both left and we were joined by another couple of birders whom I didn't know.

Time passed with nothing to show for it. About an hour later with JC at the downhill end of the zone he called out that the Wryneck had just flown up towards me. Indeed I saw a bird flying low across the field but it looked to me like a Yellowhammer! It went into a small Elder about 15 yards in along the field boundary though when we grilled it all we indeed could see was a Yellowhammer. JC was fairly convinced and in the end walked right up to the tree to see what he could flush. All that came out were four Yellowhammers. In the end we went back to watching the original area with myself and JC at the downhill end and the other birder at the other end. Suddenly the other birder called that the Wryneck had just flown from the Elder bush back to the main area! It must have stayed put as JC had walked right up to it. At least JC had been right about it being in flight all along though I'd not seen it, only the accompanying Yellowhammer. Anyway, it's little sortie into the other tree seemed to have shaken things up because suddenly it was right out in the open on the path in all its reptillian glory. JC and I fumbled for our camcorder and camera respectively but it was gone before we could get anything. A few seconds later it's head appeared in one of the side ruts and then it was gone again and that was it.

Another while passed before it was seen by the two at the other end from me to fly up into the back of one of the trees. We all ended up in the field, looking into the sun at the trees along the track when one of us spotted the bird: sitting more or less motionless in a small dead tree against the skyline. At last was a photo opportunity though it was horribly backlit. I cranked the camera up four notches on the exposure and fired off some shots in the vague direction where it was though in the bright sunshine it was hard to see the back of the camera to tell where I was shooting. These were my best efforts: 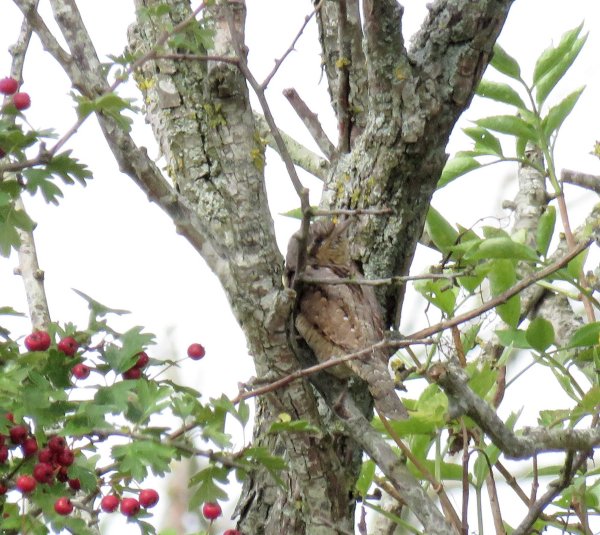 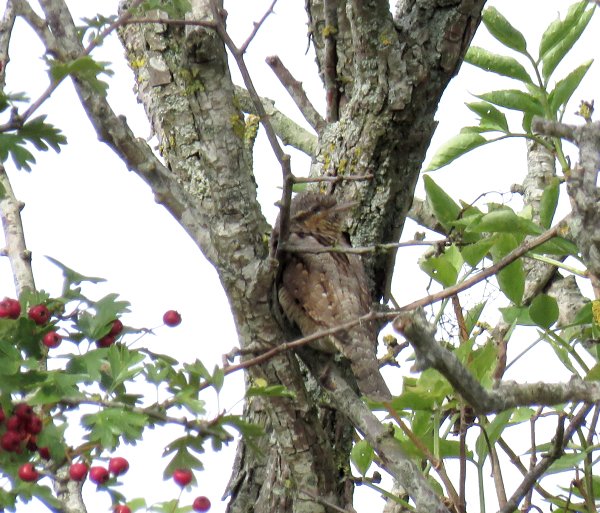 So nothing that was going to win any prizes but you could tell what it was at least. It stayed put for a couple of minutes and then flew off again.

That was enough for me. It was getting late and I was hungry for some lunch. Whilst JC stayed on a little longer the rest of us all departed. It had been hard work winkling out some decent views of the Wryneck - as is so often the case with this species. Nevertheless I had enjoyed the effort and was pleased to have seen my second county Wryneck as well as having "participated" in this autumn's Wryneck invasion.

Some video footage taken of the Wryneck when it posed in the dead tree courtesy of Badger
Posted by Adam Hartley (Gnome) at 11:36