Whilst away on holiday in the Highlands, news broke on the 26th of a White-tailed Lapwing that had been found at Blacktoft Sands RSPB nature reserve near Goole in Yorkshire. Now this was a real national Mega with only 6 previous records. I remember the last one which was found at Rainham Marshes in 2010 and which then did a tour of the country visiting all sorts of places, before departing - sadly without my ever having seen it. There was nothing I could do about it trying to see it of course being away up in the Highlands and I assumed that this was going to be another bird that got away.

I don't have so many opportunities for twitching these days: with my full time job I'm restricted to weekends at the moment and often I am too tired or not feeling up to slogging about the country in search of additions to my life list. So these days I do my twitching vicariously through following the various blogs of fellow Oxon birders who have more time and energy for that sort of thing. Still, I do like the occasional national sortie - if nothing else it makes for a change of scenery especially when working from home as I am still doing. When I do go, I limit my travel time to about 3 hours normally though I will make exceptions if it's something I especially want to see. I am starting to realise that it's becoming less important to me that I rack up additions to my life list than to have a nice day out and see some good stuff. Not that I can pretend that I have no interest in ticking things off any more but perhaps it's starting to loosen it's hold a little.

I also enjoy the opportunity to see different parts of the country that I wouldn't otherwise go to. One such place is Goole in Yorkshire. To be honest I'm not sure that I'd even heard of it until the White-tailed Lapwing turned up but Blacktoft Sands was situated close to it just under 3 hours away as the Gnome-mobile travels. When the plover decided that it liked where it was and stayed put there started to be a glimmer of hope that I might yet get to see this bird. So some 9 days after it was first found, on the first Saturday morning that I was free I waited on news and then headed off. In the end my departure was a little later than planned due to a rather restless night's sleep but the bird seemed to be pretty reliable so I was fairly confident of seeing it. Now some more intrepid county twitchers had combined this bird with "Bempton Bertie", the long-staying Black browed Albertross at Bempton cliffs but that would add an extra three hours of travel time to what would already be a long day. Another possibility was the Black Stork at Frampton which would add two hours. However, neither of these birds were "tick and run" and would both involve quite some time of staking out (possibly many hours) and to add either to the itinery would violate my new "nice day out" rule and turn it into a massive endurance test. So I elected just to stick with Blacktoft sands and to take my time there. The journey was uneventful and I made good time so it was that shortly before midday I pulled into the busy carpark at Blacktoft Sands and got tooled up.

The two RSPB volunteers on reception directed me the 100m to the Xerox hide which was the now favoured pool for the star migrant and I entered to find it not as jam packed as I'd feared. The bird was currently not properly on show, being tucked up right under the near shoreline under some vegetation but when I popped upstairs to see if there was a better vantage point someone let me have a look through their scope and my shiny new tick was secured. I then went back downstairs where there was more room and soon enough the bird emerged and I was able to admire it in all its beauty. The light was rather gloomy and the bird too distant for my superzoom so I had to resort to digiscoping. The photos were never going to win any prizes but were satisfactory so I papped away contentedly. 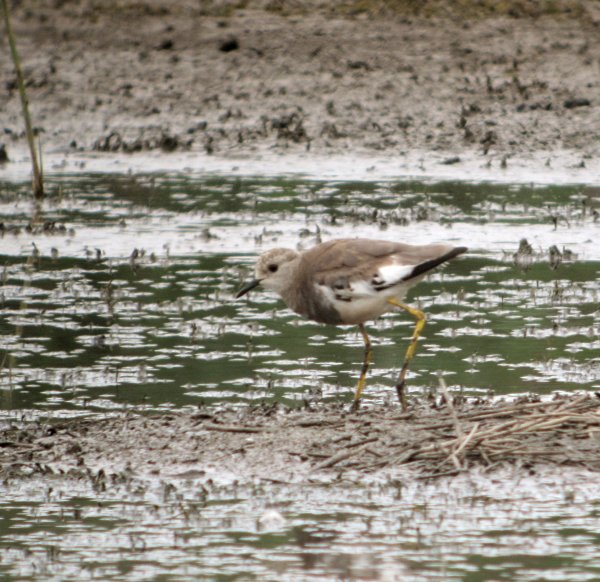 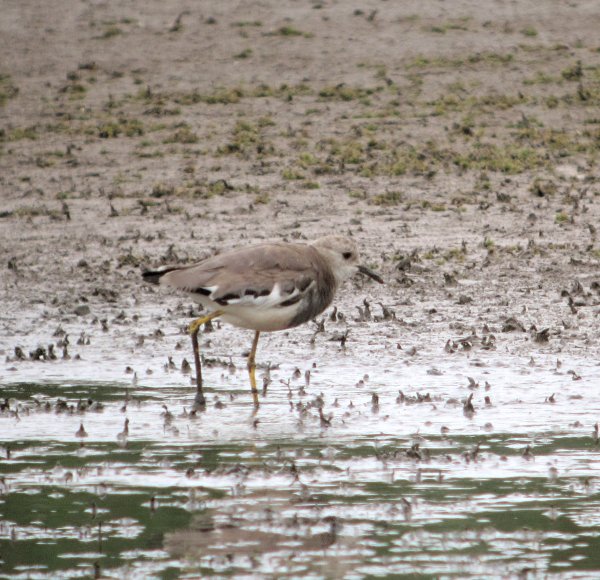 
As a species the White-tailed Lapwing breeds on inland marshes in southern Russia, Iran and Iraq. Whilst the latter two colonies are more or less resident, the Russian contingent migrates down to India, the Middle East and north east Africa. As a vagrant to Europe they are very rare so proper Mega status. They tend to prefer feeding in deeper water than other Lapwings (hence the long legs) and prefer still or slow moving vegetated water to open mudflats. This certainly tied in with the pool that it had chosen to inhabit at Blacktoft where there was plenty of vegetation and some deeper pools.

There were other birds on show at this pool including half a dozen Ruff, some Redshank and a couple of skulking Water Rail along the reed fringes. Marsh Harriers would quarter over periodically, unsettling the birds on the pool. I must admit that it was a very nice little bit of habitat. After a while it started to get more crowded as various newcomers packed into the hide to try and see the star turn so I decided to head out to the other hides. There are six hides in total at Blacktoft and I visited each in turn, taking in their various sights. Ousefleet, the furthest west, held a couple of Little Stints in amongst a flock of Dunlin and some Bearded Tits that could be seen at the back of the pool. With some Greenshank, Lapwings and lots of Snipe it was interesting to compare what was on view in this more open bare pool with the Xerox hide.

There were also three other hides to the east of the main entrance and I paid a visit to each in turn. Some were very large pools whereas others were small and more intimate. Each held a nice variety of birds and whilst there was nothing special to see, it was nice to pay a visit to each and to sit with a cup of tea from my flask, taking in the birds. I put together a day list of birds that I saw on eBird - it was fun to try to add various common species to it to see if I could hit 50 in total. I managed it in the end though only by looking out for things that I still needed on the way home from the car.

Having taken in all the hides I next went to look at the feeders by the entrance where there were some Tree Sparrows. They'd been given a giant bucket of seed and had all the food that they wanted.

Having spent about three hours at Blacktoft already I next thought that I would pay a final visit to the Xerox hide to say goodbye to the White-tailed Lapwing. However, the hide was rather full and the bird was out of sight in a bay behind large patch of reeds. As it could be quite some time before it emerged I decided that it was time I departed. I accordingly wandered back to the car and pointed the Gnome-mobile in the direction of home. The journey back was uneventful and it was just before 6pm when I arrived back at Casa Gnome. It had certainly been a very enjoyable and relaxed visit to this gem of a reserve and I did have another shiny tick under my belt which I had to admit did still give me a warm glow of success. Maybe my twitching days aren't quite over yet!