The Fall of the Elusive Wood Warbler

There was a good vibe going on in the county today. With Badger being away on his annual spring jaunt to Lesvos I was left holding the county birding blog fort so all news was coming directly to me to post rather than Jason. The morning started well with several texts before I'd even gotten out of bed: Ring Ouzel still at Linkey Down and then Turnstone plus 2 Little Gulls and then 8 Little Gulls all at Farmoor. Once finally up I checked the Oxon Bird Log and the Black-necked Grebe was still at Pit 60. What's more a Pied Flycatcher had been found in the county and looked like it was sticking rather than just passing through. This species used to be extremely sought after by county birders though a couple of birds that had stuck around in the last two years meant that it wasn't quite the county birding gold that it used to be. RBA was also buzzing with all sort of goodies appearing all over the country. It was all happening. I went for a yomp around the patch. The Port Meadow floods held 3 Little Ringed and 3 Ringed Plover. In Burgess Field the place was alive with singing Whitethroats: there must have been at least a dozen. The highlight was when I got brief views of a fly-over dove with reddish brown upper wings. Very possibly a Turtle Dove though the views I had weren't good enough for me to tick what would be the first one for a very long time on the Meadow as well as the first of the year in the country.


Back home, gradually the flow of news slowed down and it started to look like that was it for the day. It had gotten very hot and humid and I was feeling less than enthusiastic as I pottered around doing some outdoor chores. Suddenly my mobile rang, it was Paul Wren - he was watching a Wood Warbler in Shipton under Wychwood. I hurriedly took down the details and posted them to the Oxon Bird Log. This was big, very big for the county. It's one of those birds which, like Pied Flycatcher, is reported less than annually but which is almost impossible to twitch as usually it's just moving through the county. Since 2001 there have been six birds in the county with none of them being twitchable except for a one day bird at Otmoor in April 2005 which is when many county listers managed to catch up with it. Sadly I didn't take up birding again until 2007 so this was something that I very much needed. What made me think that this might actually be gettable was that Paul had cycled past there a good couple of hours earlier and had then though that he'd heard it singing but hadn't been able to stop. It wasn't until mid afternoon when he was able to come back to check it that he found that it was still there. So this bird was actually sticking around. Game on!


I got my stuff together, quickly studied the map as it wasn't an area of the county that I was at all familiar with and told my VLW that I was heading out. I'd got the call at around 15:30, and was finally out the door at 15:50. The traffic was interminably slow as usual though I was able to make up some time on the dual carriage way section of the A40. Finally at around 16:25 I got to the bridge over the river Evenlode just to the north of Shipton under Wychwood where I found Paul and Vicky Wren staring at some trees by the side of the road. I parked on the verge and hurried to join them. It turned out that the bird was frequenting three trees right by the side of the road and having been rather elusive had now started to show regularly. I soon got my first glimpses of the bird as it flitted through the trees though it was little more than fleeting views. It was singing occasionally and the song took me back to Welsh woodlands where I'd last heard one. I hurriedly sent out a few texts to those who I thought might still need it for the county. Keith Clack and Shirley came to join us just as the bird moved to a tree with less foliage and we were all able to get much better views. It's always very striking just how large they are compared to other Phylloscs. It's pale yellow supercilium and yellow face were very striking as it moved about constantly. A pedestrian came by, asking us what we were looking for and I realised that I was blocking the pavement and went to move my car. 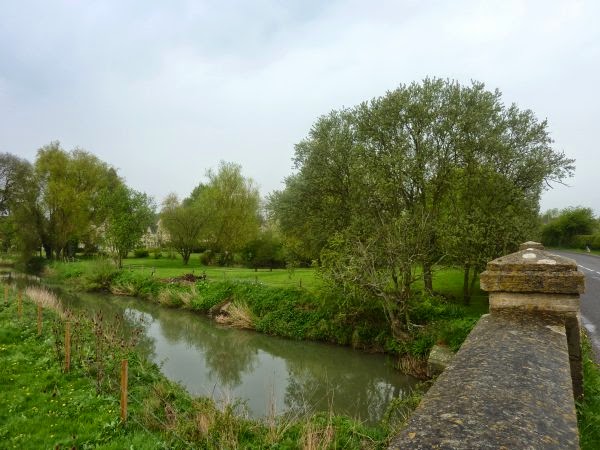 The grounds of The Old Prebendal House (a nursing home) as viewed from the bridge.
The trees in the centre are around the pond but fortunately the bird was favouring the
roadside trees when I was there.


I'd just got back to the viewing spot when the first drops of rain that had been threatening for some time, started to fall. Keith and Shirley, having got good views, decided to move on as did Paul and Vicky now that others had come to take over the baton. I hurried back to get my coat from the car and then resumed my vigil though there'd been no sign of the bird since the rain had started. After about half an hour of standing in the rain and seeing nothing Jon Prowse and another local birder turned up. I filled them in on the details and handed the baton on to them. It was time to head home to the bosom of my family, basking in the glow of having finally caught up with one of the most difficult of county birds, the elusive Wood Warbler.


There was no further news that evening and I started to think that sadly only five of us had seen this gorgeous woodland beauty. The next morning though Ewan Urquhart bravely the miserable weather only to find that the bird was still around in the same spot. He'd got permission to enter the grounds where he found that the bird was hanging out in one of the Willows by the pond. He even managed to get some shots in the gloom. Later the same day he came back for seconds and miraculously the bird was still around. At the time of writing the bird is still present more than 24 hours after it was first found and more county birders have managed to connect meaning that this species is well and truly unblocked for relative new-comers to Oxon listing. Personally I'm just glad that I won't have to chase after every Wood Warbler sighting in the county any more, having finally got my Oxon tick. 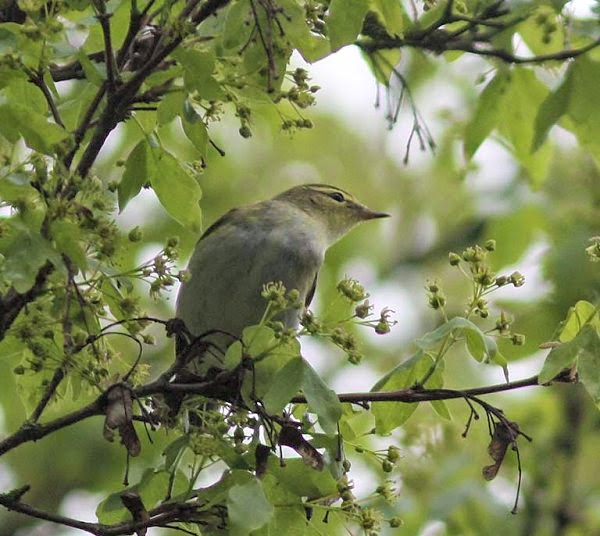 A photo taken by Ewan Urquhart (c) the next day.
See the superb Black Audi Birding for his write-up