The Tale of the Otmoor Whiskered Tern

It's not every week that you get two Code Red Scrambles within the space of five days but after the Wood Warbler excitement on Monday that is what happened in this one. This is the tale of how it happened.

It was a dreary Friday and despite the rain having been falling all day I needed to get out of the house so at around 5pm I went to check out the Port Meadow floods. I'd foolishly chosen the wrong footwear, opting for trainers rather than my walking boots so my feet were getting rather wet. Despite the rain I made a careful inspection of the floods and managed to winkle out a couple of Ringed Plover with an accompanying Dunlin (it's funny how these two species often migrate together or at least hang out together on passage). The pair of Shelduck were still around as were a few straggler ducks and Swans and a pair of Common Terns that seem to have made the floods their home for now. All in all it was rather quiet. I spent some time watching the Swallows and Martins hawking very low over the flood waters in the rain. It was great to have them back on the Meadow and I never tire of looking through them just in case they've brought a rarer cousin with them. Time to head back home so I squelched my way back towards the Walton Well Road gate and started to trudge up the hill.


I was just about 100 yards from my house when at around 6pm I got a text from Ian Lewington: "Possible Whiskered Tern from the 1st screen at Otmoor". At first I was somewhat sceptical as at this time of year the Common Terns, just like the ones that I'd just been watching, can look very colourful with grey breasts. In fact in years past I've been caught out in this way though back then Ian had pointed out that as marsh terns, Whiskereds would of course have the short tail without the streamers so these days I knew what to look for. I sent him a text asking who the observer was. It was all rather academic anyway since my younger daughter had her Tae Kwan Do class this evening so there was no chance of a twitch on my part. Oh well, I sighed - if it stays there's a chance I'll be able to get it on a dawn raid tomorrow. Ian called me back: it turned out that Joe Harris (the Otmoor warden) had described the bird to him and it sounded like the real Mccoy. Drat and double drat! I went to change out of my wet clothes and then to check that my daughter was indeed still keen on going to her class. She seemed keen enough. I sat down to dinner with the family and tried not to think about it. I got a call from Pete Barker giving more details saying that a couple of the volunteers, Zoe Edwards and Adam Reid, had seen and even photographed the bird and that it definitely looked the real deal. By this time I was getting more depressed. I tentatively floated the idea that my VLW might want to take our daughter to her class though needless to say this idea didn't go down too well. At this point Daughter Number Two pipes up that actually she's feeling very tired and that she would be happy not to go tonight. A few minutes of cross interrogation followed, checking that she wasn't just saying this out of generosity on her part but in fact she'd had a couple of exams that week and had been working very hard on revising for her forthcoming AS levels and she was just plain exhausted. Game On! I got my gear together and fired up the Gnome Mobile. It was some 30 minutes after the initial text from Ian but the weather was still dreary so with any luck the Tern would stick. There was lots of traffic around on a Friday night so there was no chance of giving the Gnome Mobiles its head - even in Elsfield I was stuck behind a slow car. Eventually I was nipping down Otmoor Lane and into the car park. Here I found Geoff Wyatt getting tooled up. He hurried off and I followed behind as Wayne Bull too pulled into the carpark.


The weather seemed to be lifting so I hurried as quickly as I could with a mixture of running and brisk walking. I caught up with Geoff and at the kissing gate decided to break ahead in my keenness - having got this far I really really didn't want to have a near miss. I arrived at the first screen to find the usual hardcore county birders all looking happy and watching the Tern. What a relief! There then followed a comical (in hindsight) minute or so whilst I desperately tried to get on it but my glasses and bins kept steaming up so hot was I from all my running. People were helpfully calling it out to me and eventually the optical mist cleared long enough for me to see it. And what a stunner it was. It really stood out in the gloom with its bright white cheek contrasting sharply with a deep sooty grey and stunningly silvery looking wings and of course its short marsh tern tail. It came closer and closer as it hawked its way along the channels between the reeds until we were treated to a fabulous fly past at no more than twenty yards range. What a gorgeous bird this was. Having been treated to such great views I decided to move from my cramped position to somewhere less crowded where I could get settled, sort out my scope and perhaps think about trying to take a photo. I moved to just outside the hide where there was more space and found myself next to Ewan Urquhart. He was still on the Tern which was now apparently climbing higher into the sky. He and Pete Roby watched it as it gradually circled higher and higher though try as I might I couldn't get onto it again. A minute or so later and it was gone, having flown off high to the North. 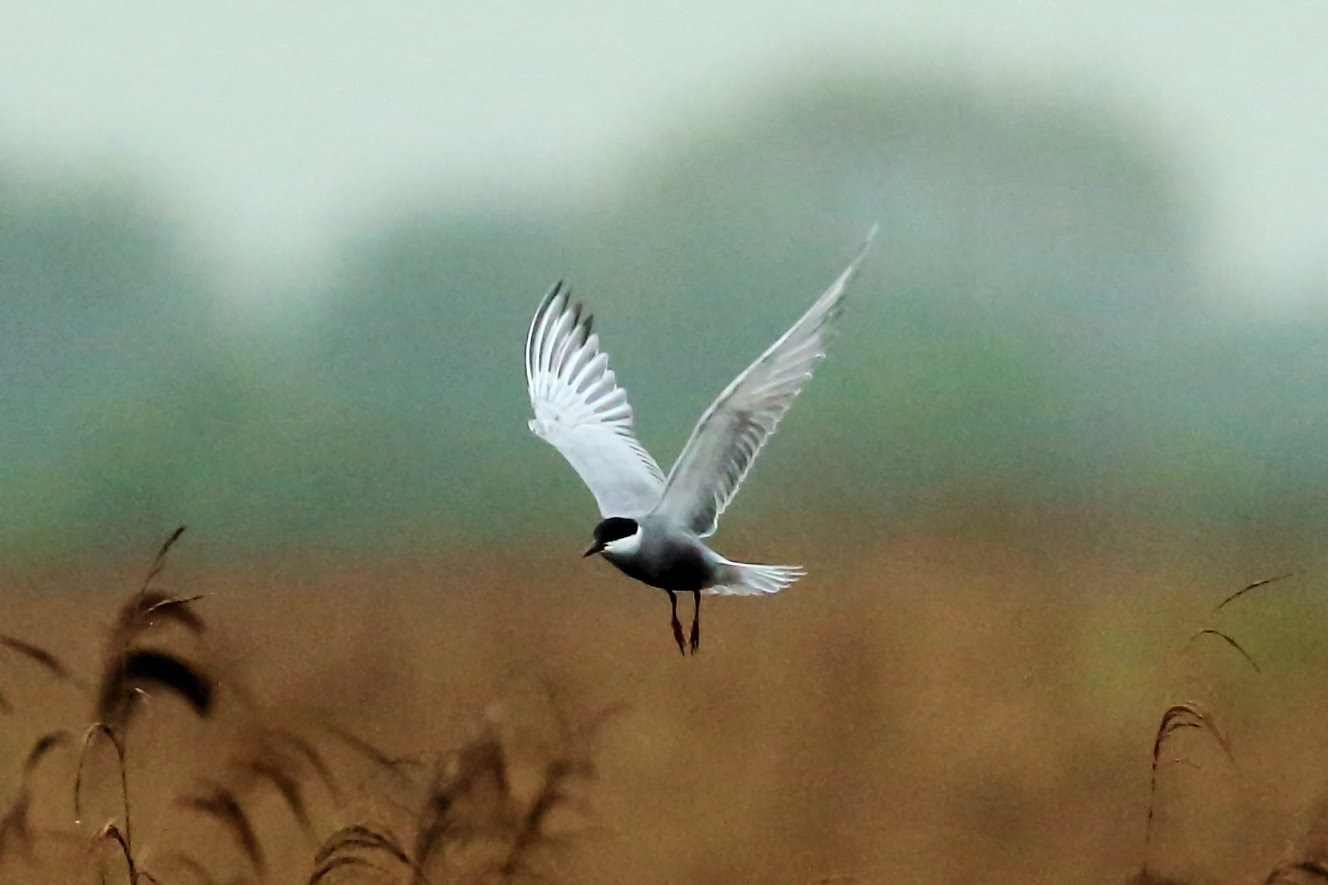 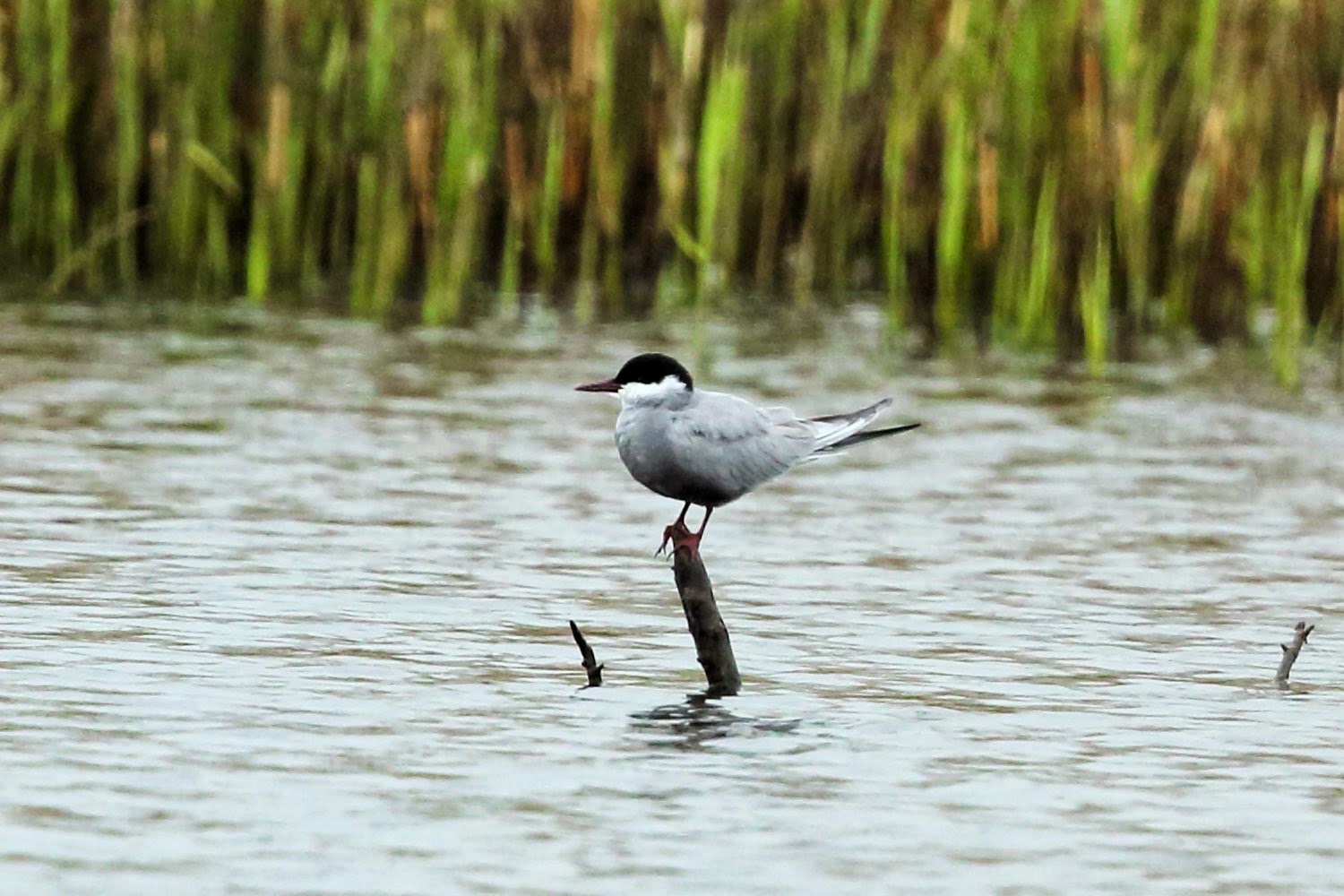 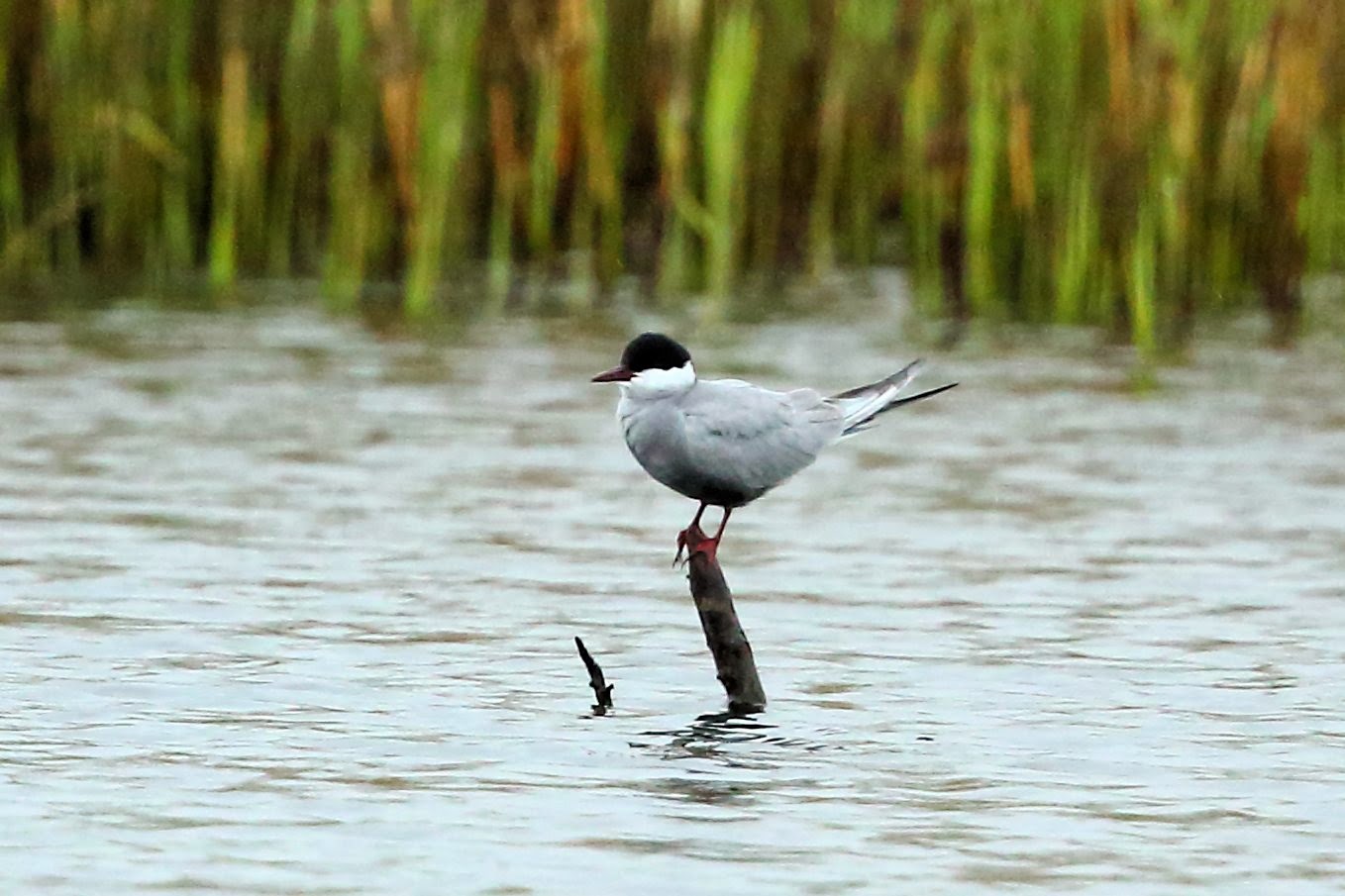 
It gradually sunk in just how touch and go it had been for me: I'd watched the bird for all of three minutes in the end. Had I taken any longer or not run then I would have missed it. Fortunately Geoff and Wayne had both come just in time to see it as well but Steve Jennings and Paul Jepson had arrived a couple of minutes too late. How gutting for them! Gradually people started to leave until it was just the two of them, Terry Sherlock and myself. I suggested to the two dippers that, having had experience of this in the past, it might well return if it can't find any decent water after a while of travelling north. Terry chipped in saying that it had disappeared for 15 minutes earlier on so they decided to give it a while. Meanwhile Terry and I headed back chatting amiably about birding as we went. I got a text from Badger (who was abroad) masochistically wanting to know the details. Each year Jason plays Russian Roulette with his county list by going to Lesvos for the top three spring weeks of the birding calender. Up until now he'd managed to dodge all county listing bullets - a Dotterel even stayed an unprecedented two weeks so that he could see it but his luck had finally run out on this trip. He'd not only missed the Wood Warbler but also now the Whiskered Tern. I'd said to him before he went that it was probably better not to look at the Oxon Bird Log to keep track of what was being missed but I know that I would keep checking it were I in the same situation. I filled him in and he put a brave face on his texted reply.

Terry and I had just got to the pump station when I got a text from Steve Jennings. Apparently the Whiskered Tern had indeed come back and was looking very much like it was settling down to roost! How lucky for the two of them - I was pleased! That was also good news for the numerous county birders who'd not been able to make it that evening with a second chance dawn raid the next day for them. Terry and I walked the last few yards to the carpark, stopping to listen out for Grasshopper Warblers in their favourite field though sadly we confessed to each other than we both had difficulty in hearing this species these days. Whether it was that they weren't singing or that we were just too deaf to hear them, either way we had no success though a distant Cuckoo serenaded us as we got back to the car park and went out separate ways.

The next morning sadly there was no sign of the Tern which I was somewhat surprised about: I'd have put good money on it being there at least at first light. Over the coming days I learnt a bit more about how the Tern was found. Apparently a chap called Paul Thomas had seen it at 2pm on Friday but had just thought that it was a colourful Common Tern. Zoe Edwards and Adam Reid had been tipped off about a strange dark bellied tern by a member of the public and went to check it out at 16:30. They then came back to the office with their photos and checked with the field guide before calling Joe Harris who went to check it out. He then called Peter Barker and Ian Lewington with whom he discussed the ID before the initial text went out at 6pm.

So that was the tale of the Otmoor Whiskered Tern - the only other Oxon record was on the 2nd May 1970 at Sutton Courtenay GP (which stayed for five days). So not quite a county first but certainly one for this current generation of birders. Someone put the tally of birders who saw it at around 14 so sadly plenty of others missed it. With a probable sighting last year at Farmoor though I can't help feeling that it won't be too long before there's another in the county.