Regular birder readers of this blog may well be getting a little fed up with the recent trend of botany posts but sadly for them, this is going to continue with this latest offering. The truth is that actually there's not much happening on the bird front for me a present: my local patch is all but dried up and birdless but with my new found interest in Orchids this is giving me an excuse to visit new locations and rummage around in the floral offerings. Actually this particular trip is a re-vist to Parsonage Moor as I came here a few years ago to catch up with the speciality Odonata including Southern and Small Red Damselfly and Keeled Skimmer. This time however it was Orchids that were on my mind, in particular the uncommon Narrow-leaved Marsh-orchid which can be found at this location. So with the weather rather rainy this week, I seized on the one nice day to make a sortie out to Cothill where I was soon wandering along the track, armed with my wellies and entering the tiny reserve of Parsonage Moor. This is quite a unique reserve, especially for Oxon, offering as it does fenland habitat as well as some reedbeds and woodland. It's in fact like a whole series of different habitats in miniature and one can pass from one area to another in just a few strides.


When I arrived I was fortunate enough to find a young woman there who was doing a plant survey for her masters degree and she quickly pointed me in the right area for the Orchids as well as identifying some of the local specialites for me - most helpful! She said that it was probably a bit early for the Narrow-leaved Marsh-orchids but in the end I found a couple in the main area. Wandering further afield I managed to turn up an Early Marsh-orchid as well but that was it on the Orchid front. 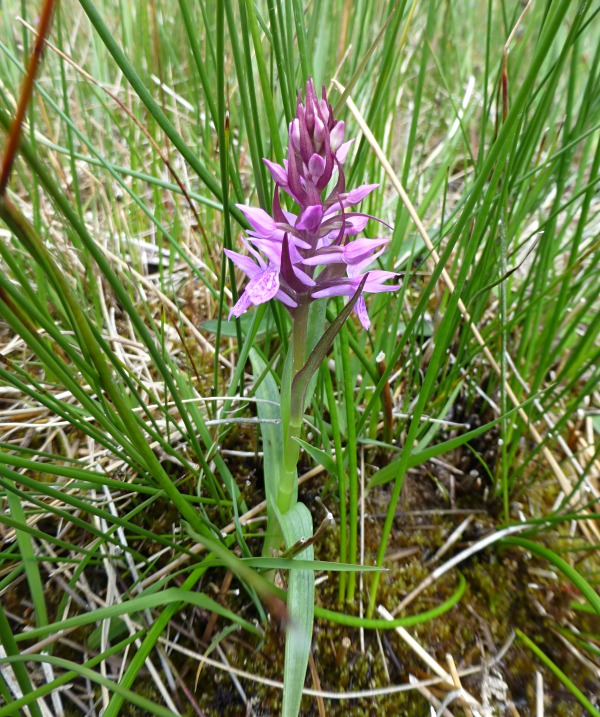 There were apparently a few speciality grasses there as well and though I'm particularly crap at these, somehow I managed to pick them out without even knowing what I was looking for with some later internet identifications confirming that I'd found the right ones.

All in all I spent about an hour there rummaging around but as it was only twenty minutes from home it made a prefect little break from work. I shall certainly be back again to see what others plants I can find in this gem of a reserve.

Addendum
Wayne Bull has directed my attention to this post here by Pixie Birder Stef Leese which states that actually these days all "Narrow-leaved" south of a line from the Wash to the Severn are now considered to be a sub-species of Southern Marsh. Oh well, I'm clearly going to have to make a visit to somewhere like Anglesy at some point to complete my Orchid list but for now this local one will make for a nice "place holder".
Posted by Adam Hartley (Gnome) at 09:43

No apologies necessary, your plant posts are just as interesting as your bird and insect ones. In fact in the wonderful natural - variety is indeed the spice of life.
ps hope you can make it to farmer tomorrow, if the weathers reasonable we could have some interesting moths. They will be looking to identify them about 9.00am.
The Oxon Feather.

Hi Adam, unfortunately these orchids at Parsonage are no longer classed as Narrow leaved marsh orchid but a sub species of Southern marsh :( Apparently if you want to see a genuine one these days you have to head to Anglesey. See pixie birding on side bar of your blog. Cheers Wayne.

Thanks for your kind words Barry though unfortunately I'll probably not be able to make the Farmoor open day this year.

Wayne, thanks for pointing that out to me. I've taken a look at Stef's post and what you say does indeed appear to be correct so I've added a footnote to my post to reflect this.